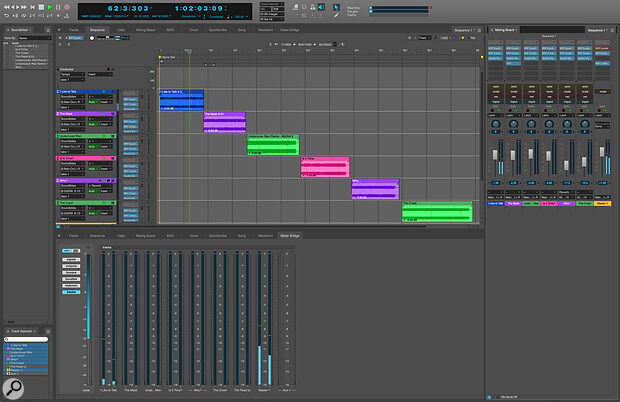 This window configuration is a convenient workspace for mastering.

We show you how to set up a multi-song mastering project.

Digital Performer offers a robust environment for composing, scoring, tracking and mixing, but it’s also excellent for mastering. This article will focus on setting up a multi‑song mastering project. If you’re only mastering a single song, most of the same concepts apply, but you can simplify the setup where appropriate.

To get started, open a new session in DP at the same bit depth and sampling rate as your masters. Next, create a stereo track (Command/Windows+Shift+S) and insert DP’s MW EQ, MW Compressor and Spatial Maximizer on it, but bypass them. Make enough duplicates (Option/Alt+ Control+D) of that track so that you have one for each song in the project.

Add a Master Fader track which you’ll use for any global processing. (If you’re only mastering one song, you can skip the Master Fader and do all your processing from one track.)

The opening screenshot (above) shows a window configuration you can use throughout the mastering process without the need to do any switching. To configure it, split the Main Body of the Consolidated Window into two sections: The Sequence Editor on top and the Meter Bridge on the bottom.

Next, use the Import Audio command (Command/Windows+F1) to bring in all the songs you’re mastering. Once they’re imported, drag each one from the Soundbites window into the Sequence Editor and put one on each of the tracks you created. Adjust the songs to be in the correct order — even though you’re going to bounce them separately, you’ll want to hear how the songs sound in the order they’ll be on the album.

Now is a good time to trim your files, getting rid of unwanted space in the front and back and add any fades you want to include. Make sure you leave enough space at the end for your audio to ring out completely.

DP offers all the features you need to master your music successfully.

Before getting any deeper into the project, adjust the relative volume of the tracks to make them roughly even. That way, when you’re making comparisons between songs, your ears aren’t fooled by the ‘louder is better’ phenomenon. You can deal with the final levels later. Right now, you just want a relative balance.

An easy way to do this from within the Sequence Editor is to hit play and listen to the first song briefly and then, without stopping the transport, click in the Time Ruler anywhere above another song. That will move the Playback Wiper (DP’s term for playhead) to the spot where you clicked, and DP will start playing there.

While a song is playing back, click above another in the Timeline and the transport will jump to that spot.

Use the volume faders on the individual tracks to make adjustments. If a song is much louder or quieter than the others, you might consider changing its Bite Gain to bring it more in line. Make sure none of your upward level or Bite Gain adjustments introduce clipping.

Start by balancing the first and second songs and then the second and third, and so forth. It helps to occasionally jump forward further than the adjacent song so that you’re comparing, say, song 4 to song 6, or 2 to 5, etc. Make sure to leave some headroom for limiting at the end.

A/B’ing your material with a well‑mastered song or album is always helpful. Import a reference song from a finished project that’s in a similar style. Put it on a separate track and level‑match it with your songs so that you’re comparing apples with apples. Mute it until needed.

Now you can use the plug‑ins on each track to apply any individual processing they might need. The Masterworks EQ is a good place to start. You can turn on the FFT button to see a real‑time frequency display, which can be a helpful tool to supplement your ears.

Remember, when you’re mastering, you’re just polishing. If you end up making EQ adjustments that are more than a few dB, you may be overdoing it. If any of the songs have significant sonic issues, consider reopening the mix (assuming you mixed it) and try to fix the problem there. 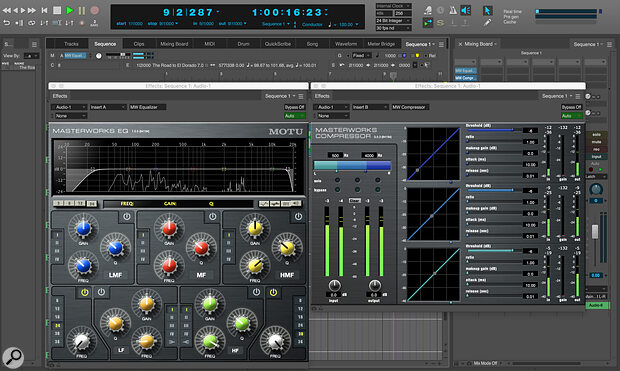 The MW EQ and MW Compressor are both useful for mastering.

Another useful DP plug‑in is the MW Compressor, which is a multiband dynamics processor. It’s especially helpful if a particular frequency range is sticking out too much. You could compress in that range only, or more heavily in one range. Again though, go easy. You don’t want to overly squash your songs, especially before you apply limiting. If one or more of the songs you’re working on sounds and looks heavily compressed to start with, try to avoid adding more.

To add some colour with compression, experiment with MW FET‑76 or MW Leveler. Be sure to A/B any processing you apply with the volumes equal between the processed and unprocessed signal, or you won’t be able to judge the effect of what you’re applying accurately. If you want to add colour across the whole album, consider using one of those vintage emulations on the Master Track but turning off most or all of its gain reduction. 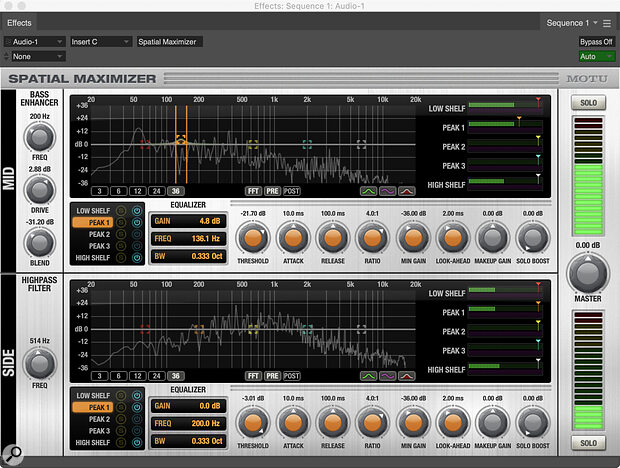 You can apply dynamic EQ and other processes to the Mid and Sides components of your mixes using Spatial Maximizer.

Another of DP’s plug‑ins that’s useful for mastering is the Spatial Maximizer. It’s a Mid‑Sides processor, so you can address the centre channel and Sides separately with dynamic EQ and more. MOTU designed it to use when mastering for vinyl, where it’s extra important to keep bass frequencies mono, but it’s handy for more than that. For example, you can use it to bring down the centre content to make the sides more prominent, creating more width. You can also apply the high‑pass filter to the side channel to roll off low frequencies there and give the song more air.

The Dynamic Equalizer plug‑in allows you to apply that process across the stereo spectrum, and can come in handy for controlling intermittent problem frequencies.

From a workflow standpoint, it makes sense to focus on processing one song first, and then use that, or an external reference track, as a model for the others. That will help maintain cohesion.

We talked earlier about levelling the songs to each other. But another critical part of mastering is getting the levels set appropriately for the destination you’re mastering for, whether it’s streaming, vinyl or CD. Good metering is essential here, and DP offers a variety of options. Set the Meter Bridge to show Tracks, and you’ll see the levels for each song at its track output and at the Master output. You can also adjust the Meter Bridge scale to change its resolution. Drag up or down in the Scale field on the left. 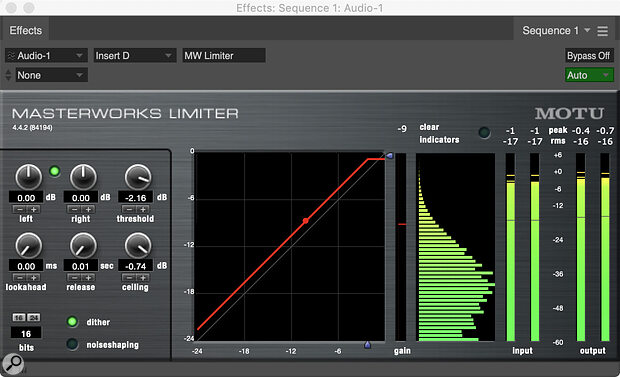 The MW Limiter’s meter measures both peak and RMS levels.

If you’re mastering for streaming services, you’ll probably want to open a loudness meter plug‑in that measures LUFS (Loudness Units Full Scale). It will show you how your levels compare to the targets specified by the various streaming services, which use proprietary loudness normalisation algorithms to bring every song in compliance with their targets.

Depending on the service, these currently range between ‑9 LUFS and ‑16 LUFS. You can find the loudness targets on the websites of the streaming service (or services) you’re mastering for.

As a general rule of thumb, it’s better to be a little over the target. In such a case, a streaming service’s loudness normalisation algorithm will attenuate the level of your song. If your master is too quiet, some services may apply limiting to make it louder, which can reduce the dynamic range of your music.

For loudness metering, you’ll need to use a third‑party plug‑in, of which there are quite a few now available. You can download a free one from Youlean Software (youlean.co). Insert it in the last slot of your Master Track.

Use the MW Limiter either on the Master Track or on individual tracks to raise the levels to where you need them for your target format. Try to use the mixer volume or Bite Gain, without incurring clipping, to get it as close as you can before you use the limiter, to preserve your dynamic range.

If you’re exporting your master to MP3, AAC or another compressed format, you don’t need to apply dither when you bounce. However, if you’re going from 32‑bit or 24‑bit resolution to 16‑bit (like when mastering for a CD), you should add it.

As you can see, DP offers all the features you need to master your music successfully. It will help you to get as familiar as you can with the plug‑ins mentioned here. The more you can control them, the better you’ll be able to make the subtle, precise adjustments necessary for successful mastering.

Although CDs are on their way to extinction, they’re not dead yet. You can use DP for burning a Red Book CD or CD image. However, you’ll probably want to do it as a separate step after completing your mastering. The reason is that DP requires that all the audio be at 16‑bit, 44.1kHz before you can burn either a CD or an Audio CD image.

It probably makes more sense to set the DP’s Bounce to Disk output format to 16‑bit, 44.1kHz at the end of your mastering session. You do want to add dither when you bounce from 24‑ to 16‑bit.

Next, you can create a new session, import the bounced song files into a single track, edit the timing between songs and then create your CD or image. The DP manual offers detailed step‑by‑step instructions for doing so.