Although Cubase 4 no longer supports Direct X plug-ins, if you have Cubase SE, SL or SX songs that use them, place those DX plug-ins inside a DX-to-VST wrapper such as Vincent Burel's FFX4, shown here, and then you can load them into Cubase 4 perfectly.

Direct X plug-in support has been dropped from Steinberg's Cubase 4 sequencing software - so what do you do if you have projects that use such plug-ins and you want to upgrade to the latest Cubase? PC Musician offers some solutions, as well as rounding up the latest PC news and information.

As I write this, Steinberg's recently released Cubase 4 seems to be getting good user feedback for its stability, and its new VST3 format is to be commended both for allowing plug-ins to consume CPU overhead only when audio is passing through them, and for having dynamic I/O, so that the number of inputs and outputs adapts in context to stereo or surround use. However, the company seem to have upset some PC musicians by abandoning Direct X (DX) plug-in support in Cubase 4, partly because they didn't announce this fact until very late in the day.

I can think of various reasons why Steinberg might want to dispose of Direct X plug-in compatibility, one of which is that Direct X plug-ins don't declare their latency to the host application, so it cannot, therefore, be compensated for. In addition, you can't automate Direct X plug-ins inside Cubase (although you can in Sonar if they comply with the Direct X v8 standard).

The majority of modern plug-ins are either shipped in VST format alone or as both Direct X and VST versions, letting the user choose one or both to install. Many musicians don't now run any Direct X plug-ins at all, and so won't be affected by Steinberg's decision, but some do, so I decided to gauge the scale of the issue by examining what proportion of my own extensive plug-in collection (several hundred in total) is Direct X only. Ironically, the easiest way to find this out is using Cubase SE, SL or SX, by opening up its Plug-in Information window and clicking on the Direct X Plug-ins page.

The vast majority of my Direct X plug-ins are from Waves, but Waves PC plug-ins have had their own Waveshell-VST wrapper for years, that lets them appear as automatable VST plug-ins inside host applications, so I'd already disabled all the Direct X versions inside Cubase SX3. Of the remainder, several were also DX duplicates of VST plug-ins (again, disabled).

On my PC, I found only eight DX-only plug-ins, and five of these were fairly elderly — three 'beyond the speakers' Qtools ones, copyright 1999; AIPL's Warmtone, from 2000, which offers tasteful tube and tape warmth; and BBE's 2001 Sonic Maximiser. Izotope's Ozone, Spectron and Trash were the only more modern ones present. I use none of these eight on a regular basis, an occasional dab of Qtools being the most likely scenario.

Other DX-only plug-ins that you might own include any particularly associated with Cakewalk's sequencer range, including the Sonitus and Sonic Timeworks ranges. I also spotted Antares' Microphone Modeller during my Internet research, while Auto-Tune from the same company has some users grumbling that they have to use the DX version for off-line processing, because the VST version currently has problems doing this. Overall, unless you're a Sonar as well as a Cubase 4 owner, I suspect you're unlikely to have more than a tiny handful of DX-only plug-ins. In any case, there's fortunately an easy way to carry on using your favourite DX plug-ins inside new projects created in Cubase 4: use a DX-to-VST wrapper instead, and load your DX plug-in into that.

Whether by design or coincidence, Acon Digital (www.acondigital.com) have recently announced their Effect Chainer, which acts as a DX-to-VST and VST-to-DX wrapper, as well as chaining any combination of up to 10 DX and VST plug-ins, with drag-and-drop re-ordering. You can load and save chains, and even share them across applications. Effect Chainer also provides a slider-based interface for generic plug-ins with no graphics of their own.

Steinberg themselves are recommending Vincent Burel's FFX4 (http://perso.orange.fr/vb-audio/...) for loading DX plug-ins into Cubase 4, which is exactly what I recommended for the same purpose with Gigastudio 3 and Wavelab montages in PC Notes February 2005. Yet another suitable freeware wrapper is Console (www.console.jp/eng/en_about.html).

If you've bought a notebook computer in the last couple of years, you should check whether its battery pack is made by Sony and manufactured between April 2004 and July 2006. If so, there's a chance that it could overheat and cause minor burns if it's on your lap at the time or, in extreme cases, burst into flame. The problem is due to a manufacturing flaw that left tiny shards of metal in the battery. Some of these may cause internal short circuits, leading to overheating.

The first manufacturer to instigate a recall and free replacement programme for these batteries was Dell, followed by Apple. Others that followed include Acer, Hitachi, IBM, Sony and Toshiba. However, at the time of writing, Hewlett Packard have refused to issue a recall after performing their own tests on Sony cells used in HP notebooks, claiming to have received no reports of overheating causing battery failure. However, they have apparently admitted that a fault is possible, so their advice may have changed by the time you read this.

To find out if your notebook is one of those affected, you should visit its manufacturer's web site for further details; you may have to check the identification number on the battery itself, which may not mention Sony at all. The total number of battery packs affected is allegedly as high as eight million, but if yours is one of them you should be able to get a free replacement, although you may have to wait some weeks for it. If your battery is confirmed as one of those affected, it's also recommended that you remove it from the notebook and rely on mains power until the replacement arrives.

Unfortunately, even with a wrapper you still can't load existing Cubase SE, SL or SX projects using DX plug-ins into Cubase 4 without losing the DX settings. For those with lots of affected projects, I recommend keeping SE, SL or SX (depending on which you use) installed on your hard drive, so you can resurrect these at any time. If, on the other hand, you've only used one or two DX plug-ins on a few projects, here's a way to make them compatible with Cubase 4 without losing any settings.

First, load each affected project into Cubase SE, SL or SX, check the Direct X page of the Cubase Plug-in Information window to see which DX plug-ins the project uses, and how many, and locate them in the Mixer effect slots. Open each plug-in's edit window in turn, then (the tedious bit) either note down the embedded preset you used or, in the case of custom settings, take a screenshot by pressing the PC keyboard's Print Scrn key. Now launch the Windows Paint utility and use its Paste function to display this screen grab.

Next, load in your chosen DX-to-VST wrapper instead of the DX plug-in, load the original DX plug-in into that and either reload the same embedded preset (easy), or use the screenshot you took to help you manually recreate the previous parameter settings. It's easier if the controls provide numeric read-outs of the current values, and a doddle if the plug-in has its own internal load/save functions, since you can then save your custom settings as a temporary preset file and reload the same settings into the 'wrappered' version. Finally, re-open the Cubase Plug-in Information window to check that no Direct X plug-ins are now being used by your song. Then save the wrappered plug-in setting under a modified name.

Given that most plug-ins in people's collections are probably VST format, this process shouldn't take more than a few minutes for each project, and you should then be able to load projects into Cubase 4 without losing any data. I checked this procedure on some of my own songs using multiple FFX4 wrapper plug-ins, some containing several DX plug-ins, and it worked perfectly.

In summary, then, if you have some Direct X plug-ins and want to use them in future Cubase 4 projects, simply use one of the wrappers recommended earlier. If you have pre-Cubase 4 projects that use Direct X plug-ins, you can convert them as just described and then remove the previous version of Cubase from your hard drive, if you wish. Finally, if you have lots of older Cubase projects using lots of DX plug-ins, just leave your current Cubase version installed alongside the newer Cubase 4. They won't interfere with each other as long as you install them in different folders.

By the way, those with old Cubase VST v5.x Song files won't be able to load them into Cubase 4 either, so if you've got Cubase SE, SL and SX, load them into that first and re-save as Project files. This will let you import them into Cubase 4. If you find, after installing Cubase 4, that one or more of your third-party plug-ins doesn't appear in its list, this may be because of rather more robust protection against those that fail during the initial scan process. If they do, they're placed in a 'black list' and bypassed. To give them another chance of success, you need to locate and delete the file called 'Vst2xBlacklist.xml'.

Aid to inspiration: Chordspace Playa is a novel new performance utility in VST Instrument format. It's been tested inside Live 5, Cubase SX, Energy XT, FL Studio, Sonar 5.2 and Tracktion, and modifies data that's going from your MIDI keyboard on its way to a software or hardware synth. Essentially, you use your left hand to play a user-defined selection of one-finger chords, while the right one plays melodies in the same scale simply by using the 'white' notes. However, it's far more creative than any 'auto accompaniment' utility I've ever seen before. For a start, your left-hand parts can either play a variety of strums, free-run arpeggios, or arpeggios synced to the song, with lots of user-defined timing and humanise settings. Each note of the octaves you define for 'chord' purposes can have a different user-defined chord associated with it, and you can even change these in real time using the pitch-bend wheel. There are also plenty of inversion and transpose options, and once I got to grips with the interface I found myself playing stuff I'd never have played before. With registration after the 30-day trial costing just £35, this is an excellent way to break yourself out of a composing rut. 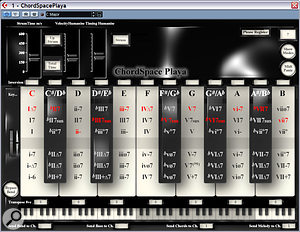 Chordspace Playa is an innovative real-time tool featuring user-defined chords, strums and arpeggios to break you out of your composing rut.

Gigastudio updated: Tascam have released Gigastudio version 3.2 (a free update for existing users), which adds support for the new Gigaviolin instrument, includes a new 'Export Mapped Instruments To Text' feature (so you can save a tabbed text-format file containing banks, patches and instrument names to document different configurations), reduces possible causes of instability and has various other bug fixes. However, the most significant improvement is that of efficiency with 24-bit instruments: the core sampler engine now offers up to a 35 percent reduction in CPU overhead, depending on the filters being used.

Chinee instruments get better: Kong Audio have released a couple of updates to their PC-only VST Instrument range, which comprises Chinee Winds, Kong (percussion), Erhu (bowed strings), Guzheng (zither) and Nan Xiaou (flute), in the time since I reviewed them for SOS October 2006. The updates add aftertouch and mod-wheel triggering for the second layer of samples, fix some issues with automation and ADSR release settings, improve presets for all instruments and add some extra ones to the Erhu. All updates are free for existing users.