The new 15- and 17-inch Macbook Pros are cosmetically identical to their predecessors. But wait... what's that on the right edge of the 15-inch model? A Firewire 800 port between the Ethernet and Firewire 400 ports! As Apple said of the original Macbook Pro, wishes do come true.

We take the opportunity of a New Year issue to look back at the 12 months that saw Apple's transition to Intel processors, and to welcome in the new Core 2 Duo-based Macbook Pros and Xeon-based Xserves.

While there are actually still a few weeks left of 2006 as I write this month's column, technically this is also the first Apple Notes of 2007, so, er, Happy New Year! It's been a pretty interesting 12 months, considering that this time last year there was considerable uncertainty about when we would start seeing Intel-based Macs, and about how developers would respond to the challenges of creating Universal Binaries. Now, though, with Apple's entire product line having made the transition, and with Logic Pro having been running on Intel-based Macs for nine months, the days of the Power PC are starting to seem quite far behind us.

In contrast to the transition to Mac OS X, in under a year almost all the major music and audio applications have become available for Intel-based Macs, including MOTU's Digital Performer, Ableton's Live, Propellerheads' Reason, Steinberg's Cubase, and even Digidesign Pro Tools, which came quite late to the game. However, the transition of plugin effects and instruments has lagged slightly. While a good many products are now running on Intel Macs, there is quite a number of plug-ins to go, and a question mark looms over certain plug-ins, where company politics have changed or products have been discontinued.

Another question mark this year has hung over the issue of PCI Express-based audio hardware, since after the release of the PCI Express-only Power Mac generation in October 2005, it seemed reasonable to expect the appearance of many PCI Express audio cards during 2006. Although Apogee rolled out Symphony (a 32-channel PCI Express card also available for PCI-X systems, that can be used with Apogee's converters) at the beginning of the year, other companies, such as M-Audio and RME, have yet to follow. At the time of writing, MOTU and Digidesign are the only other companies that have PCI Express cards shipping. However, with Digidesign, MOTU and Apogee already providing for the needs of those users requiring high channel counts, perhaps the number of Firewire interfaces on the market is perfectly sufficient to cater for those who need fewer channels. Certainly, when I'm not running Pro Tools I'm still very happy with RME's Fireface 800 interface, which was originally reviewed back in December 2004's Sound On Sound. (You can read the review at www.soundonsound.com/sos/dec04/articles/fireface.htm).

Ever since the release of Intel's Core 2 Duo processor in July of 2006, and the recent iMac revision to include this new processor, we've been expecting a revised Macbook Pro featuring the same technology. The Core 2 Duo processor, which we've discussed in previous Apple Notes, is based on the same Core micro-architecture as the latest Xeon chips Apple is using in the Mac Pro (reviewed in last month's Sound On Sound). In a nutshell, the Core 2 Duo is a 64-bit device, making the new Macbook Pro Apple's first 64-bit laptop, and features many new technologies to improve cacheing on multicore processors and the execution of SSE instructions, the latter commonly used by developers to optimise audio software.

Now Apple have indeed updated both the 15-inch and 17-inch Macbook Pro models to include a Core 2 Duo processor. The 15-inch model comes with either a 2.16GHz or 2.33GHz processor, while the 17-inch Macbook Pro is available in one configuration with a 2.33GHz processor. The buss speed remains the same, at 667MHz, but the processor includes double the Level 2 cache size as the Core Duo featured in the original Macbook Pro (4MB up from 2MB), and this is dynamically shared by the two cores. The 2.16GHz Macbook Pro includes 1GB memory, while the 2.33GHz models both include 2GB, and all models can now be upgraded to 3GB, which is great for everyone who carries out memory-intensive work on a laptop, especially as we move towards 64-bit applications.

Apple claim that the new 2.33GHz Macbook Pro is up to 39 percent faster than the previous 2.16GHz Core Duo-based model. Aside from this speed increase, one of the most welcome improvements is the inclusion of a Firewire 800 port on the 15-inch model. Like the previous 17-inch machine, the 15-inch Macbook Pro now features both a Firewire 400 port and a Firewire 800 port, which is very handy if you need to connect an audio interface and an external hard drive simultaneously, for example.

The pricing on the new Macbook Pros is, perhaps, as impressive as the features, especially when you take into account the increased memory now included with the higher-end models. The 2.16 and 2.33GHz 15-inch models cost £1349 and £1699 respectively, while the 17-inch model costs £1899.

Magsafe Takes To The Skies

In addition to new Macbook Pro models, Apple also introduced a Magsafe Airline Power Adaptor for the Macbook and Macbook Pro, which is a lead offering a Magsafe connector at one end and an airline power connector on the other. This is great news for frequent fliers with portable Intel Macs, and useful timing for me personally, as I have to take a couple of transatlantic flights over the next couple of weeks!

However, it's worth mentioning that, unlike many other power adaptors (such as Kensington's excellent 70W AC/DC power adaptor for Apple notebooks, which I used to use with my Powerbook and also works with iPods — http://us.kensington.com/html/10200.html), Apple's adaptor only provides enough power to the laptop to keep the computer running — which is to say that it's unable to charge the battery at the same time. This is, potentially, a real pain, especially if you arrive somewhere and your laptop's dead, although I'm guessing that if your laptop's fully charged before the flight, it should retain most of the charge while you're using the airline power. I'll let you know next month!

A 20mm adaptor is provided with the lead, which looks phallic enough to be a prop from an Austin Powers film, but is required for the in-seat power of some airlines' planes. While it looks as if you might also be able to use it with the cigarette lighter in a car, Apple warn that this isn't the case in both the supplied manual and on their web site.

The Airline Power Adaptor costs £39, which, while fairly expensive for a cable, is still cheaper than buying and maintaining a second battery for the flight. And since there really isn't much choice in the convenient Magsafe portable power department, it's great to at least be able to use your Macbook or Macbook Pro on a plane, even if the battery does run out!

Although shipping time for Apple's new Xserve is still three to five weeks away, at the time of writing it was at least possible to configure and order these new systems at Apple's online store. The Xserve is basically a server version of the Mac Pro, and, like the Mac Pro, is available in one standard configuration that can be customised to your requirements. The standard configuration costs £2199 and includes dual 2GHz dual-core Xeon processors, with a 1.33GHz buss and 4MB shared Level-2 cache per processor, 1GB fully buffered 667MHz DDR memory, an 80GB 7200RPM SATA drive, a 24-speed combo drive, ATI X1300 graphics with 64MB memory, and the unlimited server version of Mac OS 10.4. 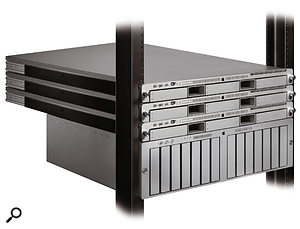 Although the Xserve is targeted at the server market, there's always been curiosity amongst musicians and audio engineers about it, since it's a Mac that conveniently fits into a 19-inch equipment rack. And this new Xserve has a couple of features that make it even more practical for our kind of tasks. Firstly, you have the option of using a PCI-X card, handy if you have PCI-X-based audio hardware you want to use. Secondly, with graphics now integrated into the Xserve (previously you had to use one of the expansion slots for a VGA-only graphics card), you can plug a DVI or VGA display direct into the new Mini DVI port.

You can still use an additional graphics card in the second slot, which is useful if you need to drive a 30-inch Cinema Display, as Apple offer an additional ATI X1300 card with 256MB memory and dual-link DVI support. So the good news is that you could put together a system with your PCI-X or PCI Express-based audio card in the first slot and a more advanced graphics card in the second slot, if you wished. Expect a full report on Xserves for music and audio in Apple Notes once the new systems are shipping