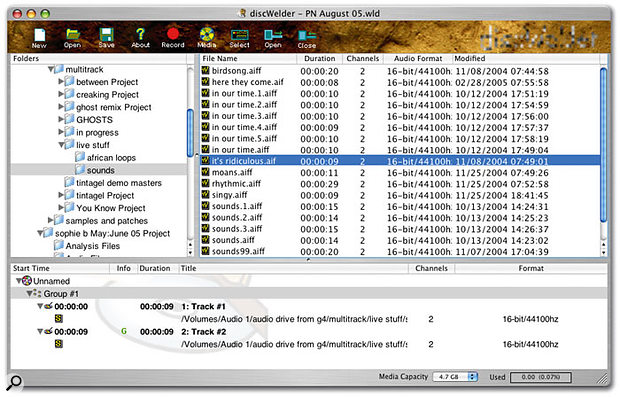 New copies of DP are now coming bundled with a trial version of Discwelder, a basic but very useful DVD-Audio authoring application.

As always, we've news and ideas from the DP scene — as well as some good old-fashioned rumour-mongering...

They say that no news is good news, and this month, as far as Digital Performer itself is concerned, that might well be correct! DP 4.52 is proving to be a very stable incarnation of the program, particularly so in OS 10.4 'Tiger'. I've read on several internet forums and email lists that die-hard DP 3 devotees have finally been tempted into the 21st Century by OS 10.4 and DP 4.5 and have found the new platform very much to their liking. Tiger certainly appears to have delivered some performance improvements and runs superbly on older Macs, as well as shiny new ones.

New DP features are very definitely on the horizon, though. MOTU have, of course, already trailed Autotune-like track-based pitch correction and a few other gadgets, but recently, when I was reviewing the notes I'd made at the Sounds Expo show in London earlier this year, I was reminded of something very intriguing I'd spotted at the time. On the development version of DP that MOTU were showing, audio plug-in and virtual instrument windows all had an additional title-bar button, labelled with a mysterious single letter: 'V'. When I enquired about this, the MOTU representative very diplomatically told me not to ask awkward questions! I've since pondered what 'V' could stand for — my instinct tells me that MOTU might have some sort of distributed processing system up their sleeve, but how 'V' relates to this I can't imagine. If anyone has a brainwave on this I'd love to hear it!

DP 's surround-mixing support is amongst its strongest features, but actually doing something with a surround mix can be a problem. DP can play it, of course, but for wider distribution you're faced with getting it into a format that consumers can play back. This often means using specialist hardware (or the likes of Universal Audio's Smartcode Pro plug-in for Pro Tools) to encode a Dolby Digital or DTS file ready for DVD production, or again relying on big-money hardware or specialist software (ie. Sonic Solutions or Pyramix) to convert your audio into the DSD format that is used for SACD discs. Complicated stuff, and none of it cheap.

In June, though, MOTU announced a collaboration with Minnetonka Audio Software, which means that new copies of DP now come bundled with a trial version of the Discwelder Bronze DVD-Audio authoring package. What's more, current DP users are not excluded from the deal, as they can download the trial version of Discwelder Bronze from www.motu.com. As a surround format, DVD-Audio can deliver 5.1 mixes at 48kHz/24-bit, but can also support high-resolution stereo recordings — up to 192kHz, 24-bit, in fact. You can even have surround and stereo tracks on the same disc, so listeners can choose what's best for their playback systems.

The Discwelder Bronze trial allows five DVD-A discs to be burned before becoming inoperative, but upgrading to a full license costs only $49. More details from www.motu.com and www.minnetonkaaudio.com. Find out more about DVD-Audio at www.digitalaudioguide.com.