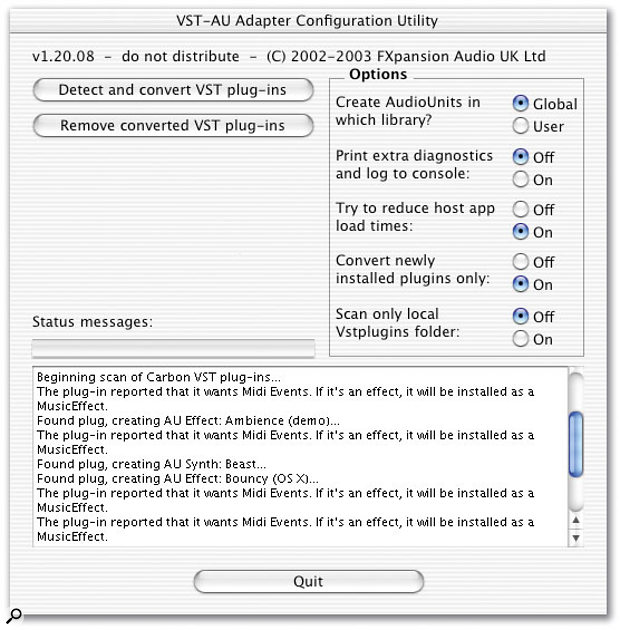 A whole world of free, inexpensive or just plain great VST plug-ins opens up for DP 4 users who also run FXpansion's indispensable VST to AU Adapter. We check out how it works and round up some DP news and tips to boot.

In September's Performer Notes, I mentioned FXpansion's VST to AU Adapter as a way for DP 4.1 users to gain access to the world of VST-format audio processing and instrument plug-ins. This application, which is already in widespread use amongst Logic users, performs a similar function to Audioease's VST Wrapper, which allowed VST plug-ins to be used in versions of DP running under OS9. But the Adapter is a different beast entirely, preparing one-off Audio Unit versions of OS X VST plug-ins independently of DP, which DP then 'sees' and uses as if they were genuine Audio Units.

The VST-AU Adapter Configuration Utility (or, as it appears in the Finder, VstAuConfigure) is the application which does the business. It's clean, functional and straightforward — but it's not the prettiest or most beginner-friendly application I've seen, so it's perhaps worth looking at in a bit more detail.

First of all, you're going to need some VST plug-ins for the Adapter to, well, adapt. Plenty of DP users will already have acquired dozens of VST plug-ins, perhaps even inadvertently (as part of Native Instruments installations, for example). If you've none, check the 'VST essentials' box for some excellent freeware and shareware recommendations. Note that the Adapter can only work with bona fide OS X VST plug-ins — OS 9 VSTs just don't have the necessary file structure to allow them to be used. And then they need to be in the right place — namely ~ / Library / Audio / Plug-Ins / VST. The Adapter will also scan the 'local' (or 'user') VST folder, inside ~ / Users / [username] / Library / Audio / Plug-Ins, but for the sake of sanity I'd really recommend putting all of your VST plug-ins in the 'global' VST folder. At the very least, don't spread them between the two.

Turning to the VstAuConfigure application itself, the right-hand part of the window shows a number of user-configurable options on radio buttons. These are all fairly self-explanatory, and they default to the most sensible set of options. The facility to create adapted Audio Units in the User library may well benefit those in a multi-user environment, as may the 'Scan only local Vstplug-ins folder' option. 'Print extra diagnostics and log to console' only needs to be enabled when you're troubleshooting a problematic VST (almost certainly with FXpansion's help — have you seen an OS X crash log?), and 'Try to reduce host app load times' is best left on, but again can be a cause of problems with some VSTs.

The final option, 'Convert newly installed plug-ins only' causes the Adapter to leave in place any conversions it has already made, only creating AUs for VST plug-ins introduced to one of your VST folders since the last conversion process. You'd think leaving this on might be a good idea, but I'd recommend turning it off, at least until both DP's AU support and the Adapter itself have matured a little. The reason for this is that I, for one, find it extremely difficult to keep track of every little incremental upgrade that I drop in to my stock of VST plug-ins, and there's just a suspicion the Adapter does too. Call it belt-and-braces, call me old-fashioned, but when I use the Adapter I always hit 'Remove converted VST plug-ins' first, and then 'Detect and convert VST plug-ins'. This might take a few seconds longer than just letting the Adapter convert new VST additions, but it ensures that you always have a completely up-to-date set of adapted VSTs. The process described above is absolutely crucial when you're using a new build of VstAuConfigure for the first time — otherwise you leave 'old build' plug-ins in place, which DP continues to use. Use of the 'Remove converted VST plug-ins' button can be a little scary at first, but remember that it's not removing anything that can't instantly be put back — your 'real' Audio Units and VSTs can't be touched by the Adapter.

The fruits of the Adapter's efforts are written to either ~ / Library / Audio / Plug-Ins / Components or ~ / Users / [username] / Library / Audio /Plug-Ins/Components, whichever one you chose during the conversion process, and they live alongside all your regular Audio Units, grouped together by the 'VST-AU' filename prefix.

As I said in last month's Performer Notes, DP subjects any newly-encountered Audio Unit plug-ins to an inspection process whilst it boots up, and this applies equally to 'adapted' VSTs. Again, call me an old fart, but I prefer to force DP to re-inspect the whole lot every now and then, and especially (again) after running a new build of VstAuConfigure, by trashing DP's Audio Unit Info Cache preference file, as described last month.

Arranging your MAS plug-ins into sub-folders can help keep audio plug-in pop-ups manageable. Working with MAS, AU and VST plugins in DP4.1 requires lots of access to OS X's Plug-Ins folder. It might seem obvious, but sticking a quick shortcut to it in your dock saves aeons of time in the long run!

Not a fan of DP's puny metronome sound? No, me neither. How about creating a Document Template for yourself that has the metronome pre-configured to trigger a nice loud 'beep' from a channel of one of your hardware synths. The same is possible with software synths, but watch for that unavoidable audio output latency.

If you, like me, are using DP with its 'stock' plug-ins, additional MAS plug-ins, some of the Waves range, and the VST to AU Adapter, there has never been a better time to get a grip of those increasingly unruly audio plug-in pop-up menus. DP groups Audio Unit plug-ins by manufacturer, but grouping of MAS plug-ins can be user-configured, just by creating sub-folders inside OS X's MAS plug-in folder. For me, six sub-folders suit my needs, and naming them all with a leading space causes them to display next to each other in pop-ups. Now, if it weren't for those pesky one-off Audio Units making the place look untidy...

So, how do converted VSTs behave in DP 4.1? Well, not all work yet, especially heavyweights like Halion and Reaktor — and, believe it or not, DP 4.1's AU hosting, not the Adapter, seems to be the culprit in many cases. But plenty of great VSTs work beautifully and without difficulty, most with full DP-based automation. However, there are a few things to watch out for...

Plug-in presets for adapted plug-ins don't appear in DP mini-menus in the way they do for many MAS and AU plug-ins. Instead, each has an additional set of controls at the bottom of the plug-in window, including a preset-list pop-up menu and a series of patch and bank Load and Save controls. As of build 1.20.08 of the Adapter (which is still technically a beta) neither of the Save functions are implemented, but saving presets is still possible via the window's mini-menu 'Save Settings...' item. As this is part of DP's functionality, not that of the plug-in, and any Setting saved is only accessible from within the current project, it's of limited usefulness, but better than nothing! Note, too, that the Adapter's Load functions deal purely in .fxp (VST patch) or .fxb (VST bank) files, and they're not intended for proprietary plug-in file and bank formats, which still need to be accessed by file-handling facilities in plug-ins themselves.

I don't think the importance of VST to AU Adapter should be underestimated. It makes DP the most 'compatible' DAW on OS X, with almost full access to MAS, AU and VST plug-ins, and for such reasonable money ($75/£49). The Adapter is already becoming a stable and reliable weapon in many a DP-user's arsenal, and if ever there was a 'must have' third-party option, this is it. 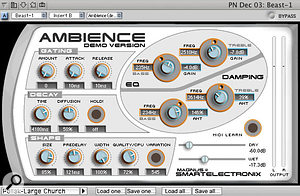 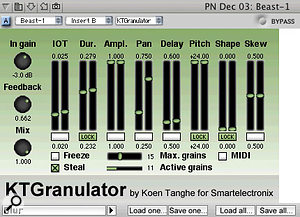 DP4.1 can now use some of the most exciting VST plug-ins out there, with the help of FXpansion's VST to AU Adapter. Note the additional patch-management section at the bottom of each plug-in. This is part of the Adapter's 'wrapping' process. There are some superb VST plug-ins out there that are either free, ludicrously cheap, or just great value for money. Here's my pick of the best that work well with VST to AU Adapter:

Although also available as an Audio Unit, the VST version of this superb-sounding and very flexible reverb has a decent user interface. Ambience is distributed as donation-ware — donate and you can get rid of the nag screen. But donate anyway. For me it blows away eVerb and even WaveArts' Masterverb

Granular synthesis techniques are right at the cutting edge of experimental music production, and this rather serious looking plug-in gives you a way in for nowt. Understanding it needs some dedication, but KT Granulator can make some truly wonderful sounds out of almost anything!

I like Applied Acoustics' Lounge Lizard a lot, but I keep coming back to this little VSTi. Simple, yes. Replacement for a real Rhodes, no. But it's really playable, and in a mix you'd be hard pushed to tell the difference.

Beast is a very reasonably-priced monosynth VSTi that's capable of fat, analogue-inspired sounds with a contemporary edge. Trasher II, on the other hand, looks like a Commodore 64 and can sound far worse, with signal degradation based on sample-rate and bit-depth reduction, distortion, and a multi-mode filter.

PSP's range of plug-ins is well-known and well-liked, and these three are the best. They're even better now, under OS X, as VST-to-AU Adapter makes them automatable.