Find that elusive synth preset when you can't remember its name, generate music from your own images, and catch up with the latest PC news bites. 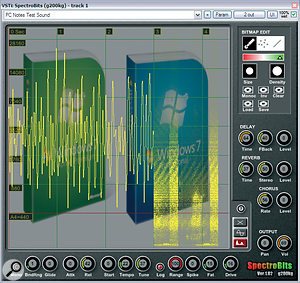 Is there a hidden audio message in the Windows 7 pack images? Find out with the SpectroBits VST Instrument.

With some soft synths now offering thousands of presets, it can be incredibly frustrating to track down a particular favourite. Even those soft synths incorporating comprehensive databases organisable by genre, instrument type, or timbre, such as 'mellow' or 'spiky',can still have you stumped when all you can remember about the sound you want is that its name included the word 'Metal' or featured a sample named 'tortured' something.

This month, I ran into exactly that problem, and at first I thought I'd use Windows' own File Search function and its 'containing text' option to type in the word or phrase I was looking for. However, this approach proved to have limitations, so I went on the hunt for a suitable third‑party utility. After discarding quite a few, I finally came up with 'Examine32 Text Search' from UK‑based Aquila Software (www.examine32.com).

This will search through both text and binary (data) files, so you can use it to track down text inside most proprietary preset formats, such as VST FXP/FXB files, Spectrasonics' multi‑gigabyte DAT files, Camel Audio ACP presets, and many others. It also offers the option of simpler text searches (single names such as the 'Metal' example I gave above) or more complex Logical searches where you know the preset you're seeking, for instance, includes both 'Adagio' AND 'Metal', or 'Adagio' but NOT 'String', and you can launch it directly from Windows Explorer with a right‑click in the folder where your presets are stored.

I've found Examine32 Text Search incredibly useful over the last few weeks, and with a bit more detective work I used it for more specialist searches, such as isolating all the presets in a library that use MIDI aftertouch (very handy if you own a keyboard with this feature), and those created by a designer whose sounds I like. You can use the handy 'Save Search' function to preserve such exotica for future use. The demo runs for 30 days, so you can judge for yourself how useful it is with your own sound libraries, although a single‑user license costs only around $45.

Over the years, various academic PC utilities have been released that convert bitmap images into audio files, but most do so off‑line, so you have to click a 'Render' button and wait a few seconds each time you edit one of your pictorial extravaganzas, before you can hear how it 'sounds'.

However, one that's rather more immediate is SpectroBits from Japanese developer g200kg (www.g200kg.com/index_e.html). Described as a 'spectrogram‑based synthesizer', and entered for the KVR Developer Challenge 2009, it's unusual in being a VST Instrument that runs inside any VST‑compatible host. This means that its base note can be controlled in real time from a MIDI keyboard, which makes things far more interesting for the performer!

You can either load in existing picture files in BMP, JPEG, PNG or GIF formats to see how they sound, or create your own from scratch using the selection of bitmap‑editing tools provided, including various sizes, densities and colours of pens, airbrushes and lines. The main window always displays your current image, but over this you can superimpose the audio spectrogram or waveform display as it scrolls in real time.

As well as various controls that interpret the image in different ways before converting it to audio, SpectroBits provides a synth engine with Mono/Poly option, a simple Attack/Release volume envelope, and delay, reverb and chorus effects. Most audio host applications will, however, let you capture your real‑time performance as it happens, which means that you can generate long, evolving soundscapes with your MIDI performance and brush strokes, and then edit and further treat them later on (or just cut out the best bits). Anyone interested in spectral synthesis should love this, especially as it's freeware!

Windows 7 Drivers: Microsoft's latest operating system is already proving popular with musicians, although there are still quite a few hardware audio devices that don't have suitable drivers, preventing some from making the transition. The biggest casualties are eight‑port MIDI interfaces, and one of the few models I tracked down that advertises Windows 7 drivers is ESI Audio's M8U XL (www.esi‑audio.com/products/m8uxl).

Entangled Species: AAS have released a bank of 128 presets for their expressive String Studio VST Instrument. 'Entangled Species' is created by Canadian composer and sound designer David Kristian, and as well as the expected warm pads, deep drones, and expressive solo strings, this library also pushes String Studio way beyond its comfort zone, offering fractured scrapes and tortured clusters that sound like escapees from an Alfred Hitchcock soundtrack. The CPU load can occasionally be high, but I was amazed at some of the new sounds David had coaxed from the AAS physically modelled engine. Entangled Species is something really special, especially at the bargain price of $39 from the on‑line AAS shop (www.applied‑acoustics.com).

Fatter Platters: Those who need vast quantities of drive space for audio and video storage will be pleased by the latest jump to higher density 500GB platters. Seagate (www.seagate.com) were the first to release a two‑platter 7200rpm hard drive offering 1TB of storage (the Barracuda 7200.12), but now Western Digital (www.wdc.com) have taken the lead with their new Caviar Black 2TB hard drive, featuring four platters. Both offer maximum sustained transfer rates of about 130MB/second, which is enough to run a huge number of simultaneous audio tracks of sample voices.