Some of the musical iPhone apps now available are much more useful than their tiny prices suggest... 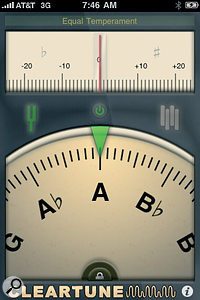 ClearTune and Shazam: why haven't you got an iPhone yet?

Although you may be reading this as the cold and bleak new year bites, the holiday atmosphere in which this column is being written is turning my thoughts to the lighter side of Apple‑related music technology. Playing around with iPhone apps is a great stress‑buster, and if the festive period has left you short of cash, most apps are free or very cheap compared to most technology purchases. You might also have had an iPhone or iPod Touch for Christmas and be looking for musical fodder, so here's a Top 20. (Most apps featured are compatible with the iPod Touch, but do check the small print at the App Store before downloading.)

Air ($1.99), made by Opal Software, who make Bloom (see below), takes the concept of interaction with generative music to another level, offering a multi‑player mode where several iPhone owners can share the compositional experience.

Air Mouse Pro ($1.99) will, as it says in its title, turn your iPhone into a fully‑featured hand‑held air mouse, complete with the full complement of mouse buttons, multi‑touch gestures and on‑screen typing.

AudioBoo (free) is a bit like Twitter for audio. It can record for up to three minutes, which you can then post to your account on the AudioBoo web site, with text, titles and geolocation. Audio memos are handled more seriously by Evernote (free), with which you can also upload images and text notes, and which will automatically synchronise with your Mac (or Windows) desktop. Essential for list‑makers!

Bloom ($3.99) is a generative music player that allows the user to interact with self‑generating musical and visual patterns using the touchscreen. Developed by ambient pioneer and über‑producer Brian Eno with programmer Peter Chilvers, it's perfect for creating a mood in the cyber‑lounge of your new studio complex. 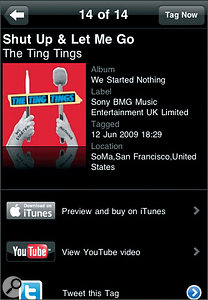 ClearTune ($3.99): The one device I always have on or about my person is not a guitar tuner but my phone, so now I have no excuse for losing said tuner. This also works as a pitch pipe for vocalists and can be calibrated for a variety of instruments.

Decibel ($0.99): No dB meter on a phone is going to be as accurate as specialised equipment, but it's useful nonetheless.

DigiDrummer comes in three flavours: Lite (free), Micro ($0.99) and the full version ($1.99). This 'drummer in your pocket' offers a traditional kit view and eight drum pads. There are 29 kits on the full version and users can share beats via Bluetooth.

FourTrack is a four‑track recorder, which, at $9.99, has equivalent technical specifications to some of the hardware multitrackers currently available. The 88 have famously recorded and released an entire song (see http://bit.ly/5J7uDR) using only the iPhone's mic, and until the release of a wireless audio interface, that is the one limitation of this otherwise comprehensive application, whose features include latency compensation, a compressor‑limiter, and internal bouncing.

iBone ($2.99): In terms of numbers of smiles raised simply by saying its name, this app is a winner. It's also a surprisingly usable trombone simulator, which lets you play along with your own music collection.

iTanpura ($14.99) is great for recreating the drone sounds used to accompany Indian classical music, and although it's relatively expensive, this app offers a surprising level of complexity and has a beautiful sound. There is also a Lite version, which is free. 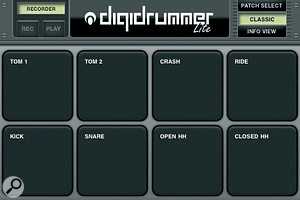 MixMeister Scratch (free) lets you use the touchpad to scratch away on top of any song playing on your iPhone, and comes with a range of scratch and vinyl sounds.

Ocarina ($0.99) is an old favourite (it's in the top 20 app downloads of all time!) but is worth another mention. When I'm dazed and confused, it always cheers me up to watch www.youtube.com/watch?v=kfrONZjakRY.

Pianist ($3.99) gives you 88 keys on an iPhone. Clear layouts let you see and play up to four octaves at one time, and record compositions with unlimited overdubs.

PocketGuitar ($0.99) has six guitar instruments that allow you to press and strum virtual strings. It needs a scrollable fretboard for dusty‑end histrionics, but otherwise great fun. No banjo.

ProRemote ($99.99) is one of the most expensive apps on the iTunes Store but is a dedicated remote control for Pro Tools and Logic Pro (support for other DAWs is planned). A full range of features can be found at http://bit.ly/8QiEbg, and a light version with support for eight channels is also available at $35.99. 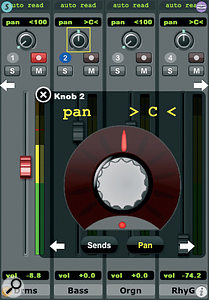 TouchOSC ($4.99) has been mentioned before in Apple Notes. With a bit of setting up, this little beauty lets you use your iPhone as a remote for any music (or other) software that supports the OSC protocol.

uDrummer Light (free). Three kits, great visuals, no miking up... what's not to like?

iPint (free): After all that work, you deserve a drink — enjoy!

Thanks must go to the Apple Distinguished Educator community for some of the suggestions in this list.

Shazam (free) is an app that identifies a song title, the album it comes from and the artist, if you simply hold up your iPhone to the speakers. Ours not to reason how, but unbelievably useful!

Midomi SoundHound ($6.99) is like Shazam on steroids. As well as identifying a song if the iPhone is put near the speakers (yawn), the 'Hound can identify tunes that are hummed, sung or whistled into the iPhone's mic, and can search for songs based on spoken text; it will even play the song if it's already on your iPhone. Scary.