The first question I’ve generally been asked when showing people my new iPhone 6 is whether or not it’s ‘the big one’. When I reply in the negative and inform the questioner that this device is not in fact the larger iPhone 6 Plus, the response is usually, ‘well, it’s still rather big!’ And indeed it is. Featuring a 4.7-inch screen and measuring 2.64 by 5.44 inches, it’s substantially bigger than the iPhone 5 with its 4-inch screen and 2.31 by 4.87 dimensions. (The 6 Plus is even larger, with a 5.5-inch screen.) However, as a concession to the iPhone 6’s larger footprint, Apple have also made the device noticeable thinner and lighter. So much so that, in many ways, I actually prefer the feel of the iPhone 5 as it seems more solid and substantial.

One reason the iPhone 6 has the illusion of being much thinner than previous models — since a 0.7mm reduction ought not to be perceivable — is that Apple have returned to bevelled edges. And while it feels pleasant enough in the hand, I kept having the sense that it wasn’t quite the comfortable fit I had enjoyed with my previous iPhone 5. This probably isn’t helped by the power button having been moved to the right side of the device so that it’s easier to reach; even after a week of use, my muscle memory is still fumbling around the top of the device searching for the button. 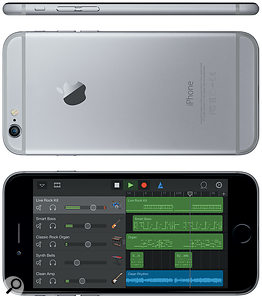 The iPhone 6 will display five Garageband tracks at once, compared to the iPhone 5’s four — and the iPhone 6 Plus can manage a whopping six!While the larger screen makes the iPhone 6 questionable from a phone point of view, having more pixels on the screen makes the iPhone 6 better as a mobile device for running music and audio apps. Where the iPhone 5 had an 1136 x 640 resolution, the iPhone 6 offers 1334 x 750 pixels, and the Plus model presents a full HD display (1920 x 1080). Apps have to be updated to take advantage of the extra pixels, although existing apps look just fine thanks to a high-quality scaling algorithm Apple have included in iOS.

One music app that’s been updated with support for the iPhone 6’s higher resolution is, perhaps unsurprisingly, Apple’s own Garageband. You can now see five tracks instead of four on the arrange view (or six on the Plus), and there’s more space for editing in general. What will also be interesting is whether currently iPad-only apps like Cubasis and Auria are adapted for the iPhone 6 models — the Plus certainly has enough pixels to allow for more sophisticated user interfaces.

Internally, the iPhone 6 is based around Apple’s new A8 system-on-a-chip, which improves on the new 64-bit architecture introduced by last year’s A7 chip (used in the iPhone 5S, iPad Air, and iPad Mini 2). While it still only has 1GB memory, Apple claim that the A8 offers 25 percent more CPU performance and 50 percent more GPU performance, though I’m not sure if this will be fully reflected in real-world performance. Geekbench 3 gives the iPhone 6 a multi-core score of 2908, and if you look at scores for the iPhone 5S, you see figures around the 2540 mark. This reflects a roughly 15 percent increase, meaning the performance improvement between the iPhone 5S and 6 isn’t as extreme as the improvement between the iPhone 5 and 5S. (The iPhone 5 scores around 1280.) It also means that if you’re currently using an iPhone 5S, you might be better off sticking with it for another year, unless you want the bigger screen.

Perhaps the biggest improvement in the A8 concerns higher sustained performance, and Apple claim that the A8 is 50 percent more energy efficient than the A7. This supposedly means that Apple can run the chip at peak performance for longer, since the chip isn’t going to generate as much heat as before, which is obviously great for CPU-intensive music and audio apps. However, perhaps more importantly, it also means these apps won’t drain the battery as vigorously.

In terms of audio performance, I used Nanostudio as a test application as it offers a CPU meter to see performance (which Garageband, annoyingly, does not). Playing the ‘Rock On’ demo project, the iPhone 6 peaked at 12 percent usage. However, as a not-quite-fair comparison, I tried the same thing with my A7-equipped iPad Air and this time the project peaked at nine percent usage. The reason I would say this isn’t quite a fair test is because the iPhone is presumably running far more background processes to handle those trivial moments when the iPhone is required to act as a phone rather than a recording studio. But if you have Nanostudio, you might try running the same test (from a clean boot with no applications running) to compare the performance of your current iDevice.

While I personally feel the iPhone 6 might not be the most aesthetically pleasing iPhone Apple have made, it’s obviously the most powerful and with the largest displays yet seen on an iPhone. While other manufacturers have offered larger displays on phones running other operating systems, I’m not going to offer any direct comparisons here. As I’ve said before, if the apps you want to use only run on iOS, your only choice is to buy something from Apple, and iOS arguably still has the best ecosystem when it comes to music and audio apps and hardware.