From rogue Firewire controller chips to Windows XP Media Center Edition, the strangest things can cause problems with PC audio...

In the August 2006 PC Notes column, I discussed buss powering of Firewire peripherals and suggested a couple of suitable PCMCIA-to-Firewire adaptors for those with PC laptops who didn't want to run their Firewire audio interfaces from a separate mains power supply. In the October 2006 issue I also included a short section on Firewire controller compatibility as part of my feature on eradicating PC audio clicks and pops. However, since then there have been so many posts in the SOS Forums asking for PCI-to-Firewire adaptor recommendations, I make no apologies this month for expanding on the topic.

Although Firewire audio interfaces have proved incredibly popular (particularly among those who want to avoid the current uncertainties about PCI-card longevity), plenty of PC musicians are suffering audio click and pop problems that seem to be due to incompatibilities with certain Firewire controller chips. I say 'seem' because it's difficult to track down hard evidence; here's what I've been able to find out.

Adaptors featuring Texas Instruments (TI) Firewire controller chips are almost universally recommended by audio interface manufacturers. Although the cynical amongst us might wonder if this is because they haven't tested adaptors featuring other makes of chip, I've noted quite a few forum posts over the last year or two that related how changing to a TI-based adaptor card immediately solved long-standing audio problems. There are also documented incompatibilities in the case of some other chips. For instance, while Firewire adaptors with NEC chips have been given a clean bill of health by both Focusrite and RME, M-Audio, MOTU and Presonus specifically advise against them.

M-Audio provide several useful FAQS, covering PCMCIA Firewire adaptor cards and 1394A PCI adaptor cards compatible with M-Audio Firewire products, in their informative Knowledge Base. They specifically advise against the use of NEC chips with their Firewire audio interfaces. The problem is that if the interface is buss-powered and you disconnect it from the Firewire port while the computer is powered up, it won't be recognised again without a full system restart (most annoying).

Meanwhile, Presonus (http://presonus.com/compatibility.html) say that NEC chips can cause installation, sync and erratic audio problems with their interfaces. (Incidentally, they also mention that ATI Radeon 9000/9001 IGP video chip sets found on some PC laptops can cause clicks and pops during playback, and since you can't replace an integral graphics chip you should avoid such laptops.) 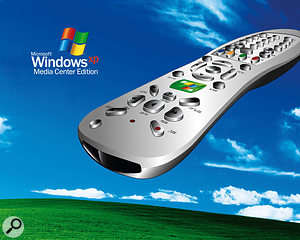 While Windows XP Media Center provides a wonderful armchair experience, it's currently causing problems for some musicians, so insist that Windows XP Home or Professional is installed if you're buying a new PC specifically for audio purposes.

Apart from TI, Firewire chip set manufacturers that do seem to get a universal clean bill of health include Agere, Lucent and Via — although it can sometimes be difficult to track down what make of chip a particular adaptor card uses. To complicate matters further, most of these manufacturers have several different chips on offer (Via, for instance, have the VT6306, VT6307, VT6308 and VT6312) and the more cautious interface manufacturers may only recommend a specific chip from each range. I've also come across isolated cases of manufacturers changing the circuit design of an existing Firewire card to use a cheaper chip or one that's easier to obtain, so even when you're buying a specifically recommended model you should double-check the chip on the adaptor circuit board, just in case it has been updated.

My best advice is always to refer to your own audio interface manufacturer's web site to see what they specifically recommend for use with their Firewire products. RME Fireface 800 users should head straight to www.rme-audio.com/english/techinfo/fw800alert.htm, where Matthias Carsten has written an in-depth discussion of the issues facing anyone looking for a Firewire 800 port or adaptor card, including the technical reasons why some products don't work properly at higher FW800 speeds, even when they do use the widely recommended TI chips. The reasons seem largely to be manufacturers misreading data-sheets or trying to cut corners. I suspect that corner-cutting to keep adaptor prices low may also account for some of the FW400 click and pop problems experienced by some musicians.

Focusrite discuss their Firewire requirements for Liquid Mix in great detail (www.focusrite.com/answerbase/article.php?id=186) and end up with a blanket recommendation for Texas Instruments and NEC chipsets. Echo (www.echoaudio.com/Support/FAQ.php) simply recommend cards with a Texas Instruments chip set. Presonus prefer TI or Via chip sets, but specifically advise against s400/s800 'combo' cards featuring both Firewire 400 and 800 ports, stating that they may cause installation problems or erratic audio performance. MOTU (www.motu.com/techsupport/technotes/fw-chip-on-pci-and-pcmcia-cards) agree about avoiding combo cards, because they recommend using Firewire cards with a TI or Lucent chip set and apparently very few combo cards use these, but they do helpfully mention Keyspan, Sonnet, Miglia and ADS as examples of manufacturers using their recommended chip sets. However, most manufacturers are more cautious, sticking to recommending particular Firewire adaptor makes and models because they have personally tested them and discovered no problems.

As mentioned above, M-Audio advise against NEC chipsets, but also provide in their Knowledge Base a separate list of 11 Firewire-to-PCI adaptors containing chips from Agere, TI and Via that they certify as compatible with their Firewire products. Digidesign provide a short list of compatible PCI cards on their web site (www.digidesign.com/index.cfm?navid=54&amp;langid=1&itemid=23113), while TC Electronic (http://tcsupport.custhelp.com) recommend three specific cards for use with their Firewire-based Powercore, all based around a Via VT6306 chip, but say that their customers have also had success with adaptors using Via's VT6307 chip, as well as providing several other customer suggestions (with no guarantees). There's a comprehensive list of 21 PCI and eight PCMCIA adaptor models that have been tested with Yamaha 's 01X digital mixer at www.01xray.com/hardware/1394cardlist.html.

Overall, there's no definitive list of Firewire-to-PCI adaptors that I can print here for general consumption, although there does seem to be some correlation between the various lists mentioned here, in that recommended models on one are sometimes recommended on the others. You may be lucky enough to find an anonymous and cheap Firewire card that works perfectly for audio purposes, but buying one with a well-known brand name featuring a recommended chip should solve many click and pop issues.

Most manufacturers of Firewire peripherals soon released firmware updates that restored full performance under SP2, and Microsoft belatedly released an SP2 fix to do the same (you can download the latter from http://support.microsoft.com/kb/...). If this has been installed, RME are adamant that it's not necessary to un-install SP2 and revert to SP1 to achieve maximum Firewire performance (www.rme-audio.com/english/techinfo/fw800sp2.htm). MOTU still advise their users to stick with SP1 in their web site's Tech Notes, but RME provide, on the page mentioned above, details of how to reinstall only the SP1 Firewire drivers, for anyone who does run into problems.

While Firewire audio has proved to be a frustrating experience for some musicians, many have yet to experience any Firewire audio problems at all (myself included — and, for the record, my current Asus P4P800 Deluxe motherboard has a Via VT6306 Firewire controller). Nevertheless, the whole subject still seems to be a bit of a minefield for the inexperienced, particularly for those about to buy an expensive PC laptop who don't realise how important the choice of Firewire controller chip can be.

For those who haven't yet come across it, the Media Center Edition 2005 variant of Windows XP is pre-installed on Media Center PCs, comes with a dedicated remote control and, in addition to the normal Windows functions, lets you pause and rewind live TV and radio broadcasts, record programs by category, play DVDs and CDs, and view your digital photo collection, all from the comfort of your armchair.

While this is no doubt perfect for an enhanced living-room experience, such real-time trickery can play havoc with software applications and hardware devices that stream audio. Over the last few months I've noticed quite a few reports of audio problems from people using this operating system, and have now compiled enough of them to feel I ought to post a warning for SOS readers.

A few musicians seem to have had no problems with Windows Media Center, but others have struggled for months with random audio interface crashes and lock-ups, audio break-up and Firewire problems. One SOS Forum user bought two very similar PCs: the first had Windows XP installed and gave no problems, while the second (bought a few months later) had Windows Media Center pre-installed and was problematic with no fewer than five different audio interfaces from various manufacturers — although this same PC worked like a dream as soon as he un-installed Windows Media Center and replaced it with Windows XP Home.

According to reports, much audio software can have compatibility problems with Media Center, including products from Cakewalk, Digidesign, Native Instruments, Steinberg and Waves. On the hardware side, interfaces and DSP cards from Alesis, Edirol, Emu, Focusrite, Lexicon, Mackie, M-Audio, MOTU, Novation, Presonus, RME, Tascam, TC Electronic and Universal Audio all suffer the same fate, as do iLok dongles. Consequently, many of these companies simply don't support Windows Media Center, so you're on your own if you use it with their products. Some people insist that 'not supported' isn't the same as 'won't work', but that's the gamble you take. Given the huge numbers of people visiting forums with their Windows Media Center audio hardware and software issues, I strongly advise the PC Musician to avoid this Windows operating system and stick with Windows XP Home, Professional or x64.

Look Inside Your PC With PC Wizard 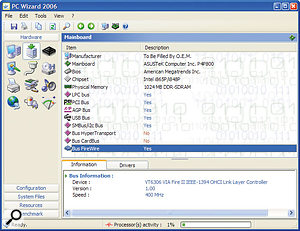 PC Wizard is a very handy utility if you want a quick and easy read-out of all the hardware devices in your PC, including the make and model of its Firewire controller chip, as shown here. I've often recommended the CPU-Z utility in these pages as the quickest and easiest way to identify what processor, motherboard, BIOS revision, chip set and RAM amount, frequency and timing you have in your PC, but it's only recently that I discovered the merits of another freeware product in the CPUID range (www.cpuid.com). PC Wizard has apparently been around since 1996 and its current version, PC Wizard 2006, provides a vast amount of information about your Hardware, Configuration, System Files and Resources, as well as offering a good selection of Benchmark tests to try on your computer.

Although in many ways it's similar to the perhaps better known Sandra utility from Sisoftware, I found PC Wizard rather easier to use, as the information you seek seems to be where you expect to find it, rather than hidden in a long list of other potentially useful but often irrelevant parameters. You don't have to be a boffin to find some very practical uses for PC Wizard, either. Apart from providing all the same info as CPU-Z, it's handy for finding out which Firewire controller chip you have (see main text), monitoring your CPU, motherboard and hard drive temperatures when your PC is being stressed on a hot day, checking that the cooling fans are still spinning, and finding details of the current Power Scheme, CPU throttling and so on.