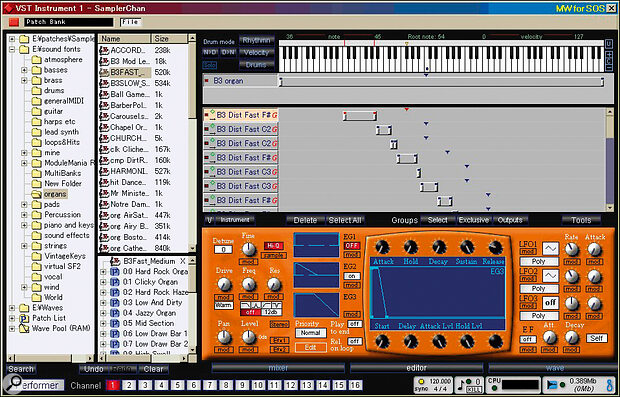 SamplerChan is an ambitious VSTi sampler offering plenty of scope for any musician with an interest in creating new sounds.

Shareware can be just as innovative and feature‑packed as its fully commercial equivalent — take FXpansion's ambitious DR‑008 sampled/synthesized drum machine, for example...

However, this feature list is only the beginning, since DR‑008's open, modular nature allows third‑party developers to create additional drum synth modules. Just in the few weeks the instrument has been available I've started to receive details of such products.

Setting Up Your Pad 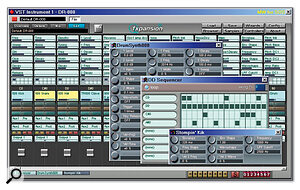 With a host of features, 96 pads, and forthcoming add‑on modules, FXpansion's DR‑008 is a tour de force for anyone interested in drum sounds.

In essence, DR‑008 can either play back existing samples (as does Native's LM4 drum instrument) or trigger its own drum synth modules (like Waldorf's Attack virtual drum machine). It's compatible with Windows 95, 98, 98SE, ME, NT4, 2000, and XP, and with both VST 2.0 and DXi formats, so it will run with all the major MIDI + Audio sequencers, including Cubase, Logic, Nuendo, and Sonar, as well as shareware hosts such as Fruity Loops 3.x and Orion Pro.

Installation is extremely clean: you just drag the unpacked ZIP files into a suitable folder, and if you're using Sonar as a host, run the supplied RegDrDxi.exe so that Windows knows where the files are. An initial Configuration screen lets you decide how many outputs and aux sends you need (anything from a single stereo to eight stereo, or various combinations of mono and stereo), and where the various Modules, Presets, Wizards, Samples, and Kits should be stored (more on these later).

It's incredibly easy to get started — you simply right‑click on any of the 96 pads, arranged in eight rows of 12, in the default Overview screen, then choose a suitable module from the pop‑up menu and start playing it. The Overview display also has space for tiny volume and pan faders, as well as Mute, Solo and Edit buttons, and a display of which MIDI note the pad is allocated to. Clicking on Edit opens up a new window with a full set of controls relevant to the particular Module.

Switching to the Details view displays four rows of 12 pads, plus a vertical scrollbar to access the rest. Also displayed in this view are Hold and Choke functions, to let you set how each drum 'speaks', Aux send sliders, and an Output selection function. The Mix view is handier for fine‑tuning of sounds, having a single horizontal row of 12 pads (plus a scrollbar to reach the rest) but a full array of every slider and button control mentioned so far, laid out like a mixer channel. Last of all is the Edit view, which is similar to the Mix view, but instead of having to launch separate windows to access the individual module parameters, you're presented with multiple pages of tiny sliders at the top of each 'channel'. It's all very intuitive once you've read the informative PDF manual.

You can load any one of the 21 supplied Modules into each pad. The Easy Sampler lets you load in any single sample in WAV or AIFF format, and then provides six sliders which alter initial Pitch, Velocity to Pitch amount, Filter Cutoff (this slider has an accompanying Velocity control), Amplitude and Pitch Decay characteristics. It only consumes a tiny amount of CPU overhead.

The UltraSampler builds on this approach, but provides far more comprehensive control over the sample, offering such options as reversed and looped playback, a complex pitch envelope, a Drive unit that adds variable distortion, and two VCAs and two VCFs with individual envelopes. This allows the original sample to be twisted in a huge variety of ways.

The QuadSampler is essentially four Easy Samplers, with an additional graphic window that lets you draw in velocity‑crossfade envelopes for each one. The final sampling option is Velo Sampler, which not only allows up to 128‑way velocity‑switching for realistic acoustic sounds, but also offers multi‑triggering for polyphonic operation. A separate Browser window can be launched to find suitable WAV, AIFF, or DRS (Fxpansion preset) files on the Internet. This works like Windows Explorer, and is just as quick.

A variety of drum synths are included in DR‑008. The EightsBass provides smooth kick drum sounds with two‑stage decay envelopes for both pitch and amplitude. Hi‑Hat uses both noise and tone fed through a band‑pass filter, while SnareDrum is an altogether more ambitious analogue‑modelling module, with a three‑oscillator architecture. 808 Kick, 808 Snare and 808 Hat provide the familiar TR808 sounds, but each features more controls than the originals, so you can alter them beyond all recognition if you wish.

HX‑Bass and HX‑Drum are both based on the EightsBass, but with added distortion and various other tweaks that produce much more aggressive bass drums and hard‑hitting synth toms. I liked these immensely. Tambourine is a fairly simple but still versatile module that can turn its hand to sleigh bells if pushed, while Stompin' Kik is ideal for those four‑on‑the‑floor epics, with its variable‑shape envelope, waveshaper/distortion, and variable low‑pass filter. There's even a Vinyl module, which allows you to add crackles, scratches, and surface noise to your grooves (if you really must!).

The final synth module is a bit of a tour de force. DrumSynth008 starts with a wave and noise mix, fed into parallel band‑pass filters, the first of which has an optional pitch envelope, waveshaping distortion to add harmonics, and a VCA envelope, while the second has a more advanced VCA envelope capable of multiple‑triggering for clap or guiro sounds. The output from these two signal paths is mixed through a clipping module that can add more bite, and then finally into a basic tone‑control network.

As if all these samplers and synths weren't enough, a third class of module, called Drum Deploy, provides various ways of processing MIDI data on the way in. DD Layer lets you layer up to four pads and trigger them from a single key for bigger sounds. DD Autoflam is similar in concept, but provides an additional delay for each sound, to spread them out time‑wise. DD Alternator lets you play a succession of different sounds from the same pad — ideal for left/right sticking, or simply to add variety — and DD Autoroll lets you set up automatic drum rolls, with control over build‑up and fade‑out speeds. The final Drum Deploy module is somewhat more advanced, providing a 16‑step sequencer with eight channels that automatically syncs to your song tempo.

You can also automate DR‑008 in four different ways, to suit your style of working, ranging from full‑on automation with more than 12,000 parameters through 16‑way mapped for Logic Audio users and 128‑way mapped for most other applications, to a full NRPN (Non Registered Parameter Numbers) implementation.

Sound quality is excellent, and DR008 offers 32‑bit internal processing and the ability to load samples of up to 32‑bit/96kHz. There are also loads of presets on offer (190 in all) for the synth modules. Presets have been sourced from instruments including the CR78, TR606, TR808, TR809, and Rhythm Ace, and there are loads of more original ones, such as the Aerosol and TwobeerBottles hi‑hats, plus old favourites such as disco syntoms.

I would hazard a guess that if you can't find suitable drum sounds here, you're not looking hard enough. Still, if you want even more scope, the Wizards menu lets you import LM4 kits, and other import formats are on the cards for the future. In addition, 80Mb of samples of just about every drum machine made between 1978 and 1992, along with several acoustic kits, are already prepared for the CD‑ROM version of DR‑008, and these will be available as downloads for existing users of the software. FXpansion also mention that future Wizard options will include beat slicing and pitch scaling.

After working my way through all the modules, my head was reeling at the range of possibilities offered by this instrument — a range that can only increase. The SDK (Software Development Kit) is a free download, and both FXpansion and third‑party developers are already beavering away on further Modules. The first to be released is Synare, a freeware synthetic snare drum with physically modelled 'Tubescreamer' from new developer DelayDots (see PC Snippets). The default sound is a very polite disco syndrum, but once the Tubescreamer is switched in, Synare is capable of some extremely nasty sounds. FXpansion themselves have a host of modules on the drawing board, including an FM synthesis module, handclaps, bongo/conga, and a more advanced sequencer, which will all be free to existing users.

Overall, FXpansion's DR‑008 is extremely impressive, and seems to combine many of the best features from Waldorf's Attack and NI's Battery in one attractive and extremely easy‑to‑use package. The added attraction is that it is supremely open‑ended. This is a flagship product at the very reasonable price of $149 (£101).

It's amazing how many simple little things you can still discover after working with PCs for years. This month I came across a Windows keyboard shortcut that I'm sure I haven't spotted before: holding down either of the Windows keys and then pressing the Pause key launches the System Properties page. If this is new to you too, you may also be pleased to discover a few other shortcuts that may make your life a bit simpler. Windows‑M minimises all windows, while Shift‑Windows‑M restores them to their original sizes and positions.