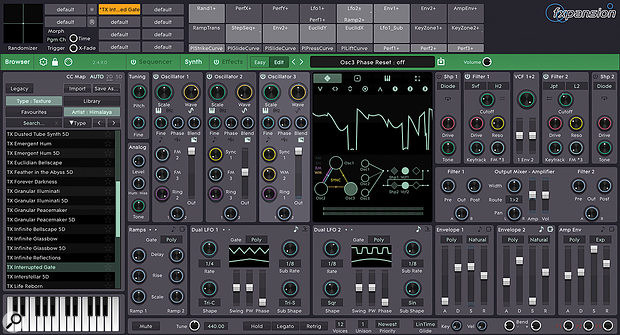 Cypher2 is a new flagship synth from FXpansion, the software company acquired by ROLI a couple of years ago. Perhaps predictably then, Cypher2 has first-class support for MPE (MIDI Polyphonic Expression), though it works fine whether or not you have an MPE-capable controller (or an MPE-capable DAW). Without MPE, you lose some expression options.

The synth is analogue-modelled, with three oscillators and two filters per voice, plus a raft of modulation features including mathematical operators and a distinctive mod matrix feature called TransMod. It can also randomise and 'morph' presets. There's a built-in arpeggiator, and four step sequencers (three dedicated to modulation).

Cypher2 is almost, but not quite, a single-page synth. There's a subsidiary page for the step sequencers, and one for the effects, but everything else is on the main page and easily accessible. The visual design is mostly flat, apart from some slight skeuomorphisms (a knurled finish on the knobs and slight shadowing on the faders). I found these a little distracting — they make the interface look busy — and usability is not helped by the rather skinny font used for the controls and menus. Although the panel layout has a modular appearance, all modules are fixed: Cypher2 is all about modulation, not modularity.

The window layout has a green 'menu bar' positioned part-way down. Above it is the TransMod system and edit buffers, while below are the synthesizer panels, a preset browser (with keyboard), and a central multi‑mode visual display (the 'scope/visualiser'). Buttons in the menu bar bring up the separate pages for sequencers or effects, while the preset browser and TransMod area stay in place. (The browser can be hidden, shrinking the window width considerably.)

The scope displays audio signals in some situations, while in others it shows preset wave shapes (such as for the LFOs). It can also display envelope shapes, filter cutoffs and signal routings. 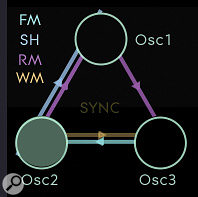 Some visual assistance for Cypher2's fiendishly powerful oscillator modulation.Enough of appearances: what about audio? The signal flow is roughly top-left to bottom-right, starting at the three oscillators and ending at the amplitude envelope into the effects. The oscillators have a switch for sine versus triangle wave, but otherwise the shape is on a selectable continuum from sine or triangle through to pulse, with an approximate square wave part‑way along. From here, the waveshaping can get fiendishly complex: each oscillator can blend into another via Sample & Hold, and oscillators can be linked together via hard sync (with variable sync amount), frequency modulation, waveform modulation or ring modulation. Luckily the scope panel draws a handy graphic icon giving some indication of what's going on.

Each oscillator has a level fader and a mix knob for its output, the latter determining how much audio goes to each of the two filter sections. There are several filter types available (state-variable, ladder, Sallen-Key, OTA, comb) with various 2- or 4-pole modes. Each filter is preceded (or, at your choice, followed) by a shaper, which models various kinds of overdrive and distortion. Curiously, there's a single VCF panel for the filter section, which is where you're expected to add envelope modulation. The two filters have their own individual cutoff and resonance controls, and can be optionally linked to the VCF. The filters also have their own overdrive sections, and can be frequency modulated at audio rate by oscillator 3.

The synth's VCA section has two inputs, one from each filter section, and each input can be a mix of pre- or post-filter. A control in the VCA selects whether to send the output of either filter into the other. Again, the scope panel provides handy feedback.

VCF, VCA and effects routing.There are two effects chains per preset (FX A, FX B), each of which can contain up to three effects. The chains can be arranged in series or parallel, and modulation in the VCA can cause voices to be 'panned' between the two effects chains polyphonically, which should be good for some dynamic soundscaping. The selection of effects is very respectable, with EQ, dynamics processing, reverb, delay, modulation and distortion all well catered for. (Some are component-modelled, while others are 'pure' DSP.) My only real criticism of the effects is the visual presentation of their parameters: labelled knobs and the occasional drop-down menu. While the knobs are coloured for clarity, if you're expecting EQ frequency displays, compression graphs and the like, you're going to be disappointed, and will have to fall back on the age-old technique of using your ears. The effects do sound good: rich without being muddy or cluttered.

Cypher2's real strength starts to show when we look at the modulation system, TransMod. At the top of the window is a grid of 24 panels, each of which represents a modulation source. Click a TransMod panel to activate it (it turns bright orange), and you can then click and drag slightly outside any synthesizer knob or fader to set the modulation amount. As you mouse over the synth controls you can see which TransMod slots affect them, while mousing over a TransMod slot highlights the controls it's connected to and how much it affects them. Multiple slots and multiple parameters can be connected up, with no apparent limit.

Using TransMod to apply a bit of randomness to oscillator 3's frequency.Just in case this doesn't sound quite powerful enough, the first 16 TransMod slots are not preset: you can choose any of well over 100 sources for a slot, and then choose a second scaling source to multiply it by. (Luckily the scope panel can give a real-time display of the two sources and the output of any slot.) The last eight TransMod slots are preset to performance controls (the five MPE gestures, and three macros) with no scaling modulators, but they do have variable slew timing and editable response curves.

Impressive: but we're not done yet. In addition to the three macro controls (intended to be mapped to MIDI controllers), there's an X/Y pad with a built-in physics emulation: X and Y inputs influence a model of a sprung weight whose position, distance and bearing from X and Y emerge as a set of modulation sources. And, of course, the X and Y inputs can be modulated, producing anything from gentle smoothing to a veritable two-dimensional rollercoaster of control output.

Cypher2 sports four step sequencers, one of which can be used for sequencing notes or as a modulation source, while the other three are modulators only. The 'main' step sequencer has a note section and a gate section, where gate events can be configured for behaviours such as trigger on probability settings, or based on the previous step. The main sequencer can also be switched into an arpeggiator mode, with the usual selection of range and note order options. In step-sequence mode you step-record notes into the sequencer (though sadly there's no semitone or keyboard graphic to label the piano-roll display), and you can then transpose the playback via keyboard input.

A scale processor coerces output notes to a specific scale in any key, and optionally transposes the sequence into that key beforehand. The scale processor has eight configuration slots, and it's possible to switch between these dynamically under modulation control.

Although most of the sequencer section can be controlled via TransMod (or, for that matter, by direct MIDI mapping), there's a dedicated matrix modulation panel, where the main sequencer parameters (step timing, pitch, duration, velocity, scale selection) can be directly modulated by one of the three modulation sequencers, using easy-to-see radio buttons. (For some reason the amount of modulation applied here cannot be varied; it's all or nothing.) The main sequencer also has eight independent memory slots, and selection of this slot can also be modulated.

The modulation sequencers themselves are simpler than the main sequencer, but have a slew setting for smoothing their output, and also have eight memories each.

Cypher2 has a few ways of combining multiple existing presets into new ones. For a start, it has not one edit buffer, but eight. (Well, technically 10, including freeze and randomiser buffers, which we'll look at shortly.) You can switch between presets in their various edited states by clicking the appropriate panel. Such preset switching is fast, but unlikely to be glitch-free unless the presets are pretty similar. And if only some of them have the step sequencer enabled, you deserve all the confusion that will result. (Entire sets of parameters, such as the sequencer page, can be 'locked' to try and prevent abrupt changes.) Turning the Time knob to the right changes preset switching into a morphing operation, crossfading to the new preset over a period as long as 10 seconds or so. 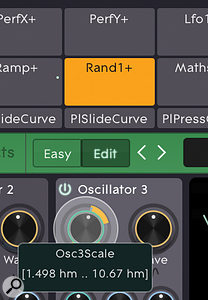 Multiple edit buffers, including those for freeze and randomise.A crossfade control lets you manually dial up a morphing point between two presets and freeze it as a third one. In this situation you get to pick the state you want and save it for future use. The freeze slot holds a history of past attempts so you can roll back to earlier, more successful efforts.

The randomiser takes a preset and generates four random variations of it. (You don't have any control over these variations.) Then, moving a small on-screen joystick lets you morph between them, picking any intermediate one you like, and then repeating the process. Again, there's a history of the randomised presets generated. I found this to be a source of some wonderfully wild and organic soundscapes, but to get something musically useful you'd probably have to go in and fix up some pitch settings afterwards.

It's the biggest cliché there is, but I have to say I loved the sound of Cypher2. Even the raw waveforms have a slightly warm presence, testament no doubt to the circuit modelling used to generate them. Presets are warm and lively, with a richness of sound which doesn't become muddy or indistinct, and there's not a hint of digital noise. Cypher2 can take itself from Yamaha CS80 territory to the world of complex modular noodling without breaking a sweat.

On first impression, nothing about Cypher2 particularly leapt out at me: the specs looked good on paper, but the interface was a little cluttered, and it really wasn't clear how easy it would be to learn and use. However, I found myself warming to it very quickly. The sound quality is excellent, and I can forgive some of the fiddly aspects of the user interface when it's so easy to come up with new and engaging sounds. TransMod is an impressive modulation system that's easy to use, and the step sequencing pages offer huge scope for rhythmic or algorithmic composition. While preset morphing has a few rough edges, the ability to capture crossfaded or randomised presets is a wonderfully organic productivity boost. And if you own MPE hardware, you have access to rich, expressive sound possibilities.

I really can't fault the architecture or sound engine, but I can't help feeling that Cypher2 is let down a little by its visual design. Controls are cluttered and fiddly to operate, and the effects panels look simplistic and dated. If FXpansion were to give the interface a refresh, lose the skeuomorphism and offer the effects section a bit of graphic-design love, Cypher2 would be an absolute killer.

Cypher2 is a component-modelled virtual analogue synthesizer with a modulation architecture that is powerful but also (thanks to a visual scope display) relatively easy to use. There is MPE support and an extensive step‑sequencing section. Presets can be crossfaded and randomised.