Gigastudio: Where To Now?

Where to now for Gigastudio users, following the news that Tascam have discontinued the software's development? PC Notes makes some suggestions. 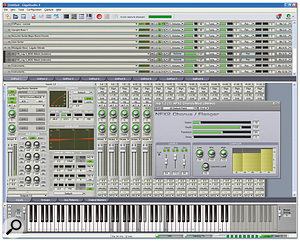 The future is uncertain for Tascam's Gigastudio software and for its users, some of whom are petitioning for the program to go 'open source'.As mentioned in last month's SOS News pages, from July 21st Tascam ceased further development of their PC-only Gigastudio software and related products such as GVI (Giga Virtual Instrument — the VSTi version of Gigastudio) and the Gigapulse convolution reverb plug-in. Product sales and support will also finish at the end of this year. All these products now appear in the 'legacy' section of the Tascam web site (www.tascam.com/legacy;37,7.html).

This is sad news indeed, not only for Gigastudio users around the world who have made big investments in GS products and the PC hardware required to run them, but also for the in-house Giga development team, who are no longer required, and the third-party developers who have spent so much time creating sample libraries that take advantage of unique GS features. One of the most important of the latter is the PRF (Portamento Reshaping Filter), a morphing filter for shaping formants so that developers could pitch-bend samples yet retain their original frequency response characteristics. This technology was used heavily in Tascam's own Gigaviolin, and in Wavelore's Pedal Steel Guitar (the latter released just days before Tascam's bombshell announcement).

The release of Tascam's GVI 4, promised since Autumn 2007 on PC and Mac, will not apparently happen now either. This is a real shame, since the release of GVI 4 would have enabled all GS libraries (including those that require GS4-specific features) to be run across two major platforms. We asked Tascam US for a comment on the GS decision but were not able to get one in time for our print deadline.

The increasing trend for library developers to create their own sample players instead of releasing GS-compatible libraries certainly hasn't helped Tascam. Sonivox originally licensed Tascam's Windows-only GVI player for their 38GB Muse instrument (see SOS April 2007 for our review), but have obviously been waiting for the Mac GVI version ever since. Whether by accident or design, almost simultaneously with Tascam's news they issued a press release of their own announcing a new Sonivox cross-platform sample player that "focuses on intelligent MIDI performance, intuitive interfaces, and the highest sonic fidelity". Sound familiar?

Other companies that have decided to concentrate on developing their own cross-platform engine include EastWest with Play and Spectrasonics with the STEAM engine of their forthcoming Omnisphere — and you can't blame them for wanting to be more in control of their own destinies. Others started developing sample libraries for Gigastudio, yet ended up switching to NI's Kontakt, partly, I suspect, because it's already available for both Mac and PC.

Periodically we all end up wanting to uninstall applications or drivers, and most of us simply use Window's own 'Add or Remove Programs' applet in Control Panel. However, as many of us have found over the years, the Windows uninstaller often leaves behind unwanted files, folders and Registry entries, and sometimes refuses to uninstall at all, due to one missing file. 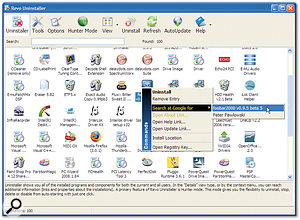 Do you want a freeware utility that uninstalls applications more thoroughly than Windows' own, as well as providing lots of helpful information into the bargain? Revo Uninstaller does this and more. Enter the freeware Revo Uninstaller utility (www.revouninstaller.com). For a start, it's nice and easy to find the application you're looking for, using its various View options. Larger icons let you home in visually and 'List' lets you do the same with more complete textual readout, while 'Details' helpfully shows you installation size, date and version numbers (which can sometimes be tricky to track down, and generally require you to launch the application to see them).

The right-click options are particularly helpful to those whose PCs are on-line. Apart from giving access to the more obvious Uninstall and Remove Entry options and letting you open the Registry editor at the appropriate entry, they also let you launch the application's Internet Help and Update pages, and (my favourite) perform a Google search for both author and application. (How often have you discovered something in your install list and wanted to track down the developer's web page, or not known what the application actually did, especially when it might have been installed as part of a larger application?)

RU also features a 'Hunter' mode that leaves a target icon on screen at all times, which you can drag and drop on any desktop, quick launch toolbar or system tray icon, or a loaded application, and then uninstall, stop or kill them. Although both standard and hunter-aided uninstalls are carried out by Windows as usual, RU additionally scans your hard drive before and after this process, so that it can remove unnecessary files, folders and Registry entries.

It also offers a selection of other tools, including Autorun Manager (where you can decide which applications and utilities run each time you boot your PC, and view their useful publisher and description information) and various cleaner options that handle Junk Files, detritus from Browsers, MS Office and general Windows temp files and application histories. There's also 'Unrecoverable Delete' to permanently remove confidential or sensitive files, and 'Evidence Remove' to permanently wipe 'unused' areas of your hard drives that may nevertheless still contain sensitive data. At just over 4MB, the Revo Uninstaller is a tiny utility, yet it packs in a lot of useful features. I can see myself using it a lot in the future!

Of course, most of those who are already using GS successfully will carry on using it for as long as possible, although Gigastudio's low-level kernel engine has also been a double-edged sword, since while it gave the application its famed low-latency performance, this was sometimes at the expense of hardware compatibility problems. In the past, both Hyperthreading and multi-core processing issues took considerable time for the GS team to resolve, while a few musicians gave up trying to get GS3 to run smoothly on certain PCs. Occasionally even your choice of hard drive might cause problems!

We simply don't know whether the final GS4 release will suffer further conflicts with future PC hardware, and even if we ignore that possibility there's another worry for existing users of GS3 and earlier, and that's what happens when they need to authorise them in the future after upgrading their PCs. While GS4 and GVI 3.5 both rely on Syncrosoft dongles for protection, GS3 and earlier versions use a system-specific challenge-and-response system. Hopefully Tascam will keep their automated on-line authorisation system running so that existing users can continue to install the GS software they paid for on future PCs. In the short term I suspect that this concern may generate more sales for both GS4 and GVI 3.5, because once you have your licensed dongle you can continue using it on any future PC. GVI is also immune to many of the technical problems that beset some Gigastudio users (because it runs inside a VST-compatible host rather than as a stand-alone application), so it may be wise for some GS3 users to make the switch.

Overall, there is such a large GS user-base around the world that some are already hoping Tascam will either sell the code to another company or release it to become an Open Source project that can be further maintained and developed by the community. If, like many other users and developers, you want to encourage Tascam to do this, visit www.opengigastudio.com and sign the on-line petition there.

In our August 2008 feature on budget PCs for music, I mentioned that many high-street desktop PCs become less appealing if the computer is going to be in the same room as microphones, because they mostly use cheaper cases with thinner panels and 'stock' heatsinks and fans for cooling, to help them achieve lower prices, potentially resulting in a noisier PC. You can, of course, replace the CPU heatsink and associated fan with quieter models, and likewise with any case fans the PC might have. There are also acoustic treatment kits available that line the existing case to reduce overall noise levels.

However, the PC's power supply can be another potentially noisy component and, as I've discussed before, a cheap PSU can also be a source of unreliability. They can even blow up, and can damage the motherboard and CPU if they fail. Moreover, a PSU supplied with a cheap PC may be fine powering the setup as supplied but might run out of juice if you add extra components such as an additional hard drive and soundcard. Many people do get away with using the cheap PSUs found in budget PCs (after all, manufacturers wouldn't use them if too many of their customers immediately ran into problems). However, musicians tend to plug more stuff into their PCs than the average owner, which can aggravate potential PSU problems, so if you experience random crashes and spontaneous reboots it may be worth investigating more beefy power supply.

If you want to calculate just how beefy it needs to be, you could do worse than visiting the eXtreme Power Supply Calculator Lite v2.5 (www.extreme.outervision.com/psucalculatorlite.jsp), where you can tot up your requirements on line, component by component. I personally favour Seasonic PSUs for being quiet yet generally inexpensive, but there are plenty of others available from companies such as Antec, Nexus, Tagan and Zalman. You can read more about 'Advanced PC Silencing' in our April 2006 guide (www.soundonsound.com/sos/apr06/articles/pcmusician_0406.htm).