We're all familiar with the PC upgrade treadmill — but do recent hardware developments mean that we can now step off it?

Back in PC Notes March 2008, I discussed the beginning of the end for my two PC upgrade rules of thumb, which had stood me in good stead for some 10 years. The first stated that 'If you want your computer to be able to run the latest audio software, you will, on average, need a major computer upgrade every two years'. This rule remained perfectly true for me across five computer systems from 1993 until 2003, but my next PC lasted me for three years before I felt the need to upgrade, while the one I built in 2006­ — with its dual‑core 2.4GHz processor — is only now feeling a little under-powered, after a huge five years.

My second rule stated that 'When upgrading, you should ensure that your processing power increases by at least 50 percent, so that the expense is justified by a significant improvement in performance'. This rule stands for the host of musicians who want to upgrade their existing PCs. If your current machine is flagging a bit and you have the opportunity of replacing its processor with a faster one, only bother if it offers you at least 50 percent more audio performance, otherwise you're unlikely to notice much difference.

However, I'm currently researching a new machine based around a Sandy Bridge quad‑core i7‑2600k CPU (and will, of course, document its build for those interested in following the DIY route), and its audio processing capability will make a mockery of that second rule, since, with overclocking now officially sanctioned by Intel, I'm likely to get a six-fold increase in performance over my current machine.

The End Of Trends?

So are there still any PC upgrade trends, or has this bandwagon finally been dismantled? Well, plenty of musicians seem perfectly happy with the computing power they already have and have no immediate plans to upgrade unless their current PC breaks down, while others still move inexorably forward with more powerful machines as their particular creative demands dictate.

The disparity was recently brought home to me when someone on the SOS forums asked if their Carillon dual‑core 2.4GHz PC was worth anything, and replies ranged from one person saying that only the case was worth salvaging to another who was keen to buy the whole system, as it would be perfect for his current requirements!

Focus On The GUI 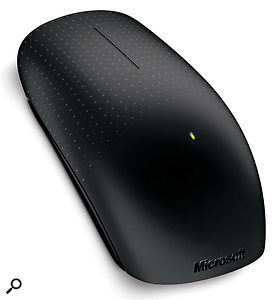 With multiple touch‑sensitive, capacitive sensors, Microsoft's new Touch Mouse could herald a new era of low‑cost, multi‑touch, gesture‑driven software.PC technical specs will probably spread even wider when the Windows 8 operating system is released in Autumn 2012, as Microsoft are now describing it as "a re‑imagining of Windows from the chip to the interface”. While the largely familiar Windows interface remains, a new touch‑based version, borrowing heavily from the Windows Phone, is also simultaneously available to users, suggesting that there will be a single operating system for both traditional PCs and the new Windows‑based tablets.

Moreover, Microsoft's recently released Touch Mouse, which responds to horizontal thumb swipes and one-, two- and three‑finger gestures, is also going to be supported in Windows 8, as are multi‑touch trackpads and, presumably, touchscreens. Described as "fast, fluid and dynamic”, a Windows 8‑based PC, say Microsoft, "is really a new kind of device, one that scales from touch‑only small screens through to large screens, with or without a keyboard and mouse.”

This scaling, along with Windows 8 system requirements remaining identical to those of Windows 7, shows a new trend — 'ease of use' rather than 'more raw power' — and ties in with studies suggesting that we will be moving towards virtual and cloud-computing architectures over the next five years. Cloud computing, with on‑demand network access to a shared pool of computing resources, could make perfect sense for a lot of musicians who already store audio files online and collaborate online with their peers. Perhaps we'll see 'band' as well as individual or corporate licenses for software, so that all musicians in a group can legitimately share the same online apps. Now that many of us already have more than enough personal computing power, a new, easier‑to‑use shared environment could make a lot of sense! 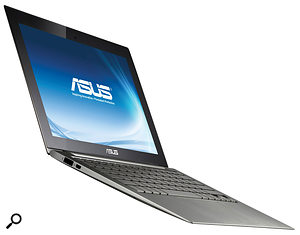 The Asus UX21 is the first skinny 'Ultrabook' PC laptop design to be released with 'tablet‑like features'.Apple's slim and 'ultra-portable' Macbook Air debuted to some acclaim last year, and now Intel's Ultrabook format may radically alter the PC-laptop computing experience as well. The first wave is expected to ship by September or October 2011 from companies such as Asus and Hewlett Packard, with models less than 20mm thick and weighing under three pounds, with a solid‑state drive. They feature instant‑on capabilities and could also be the first PC‑based devices to sport the new (but currently Mac‑only) Thunderbolt ports.

Portability can, of course, be important to musicians on the move, and the fact that this new breed of laptop features rugged, all‑aluminium enclosures is encouraging for that purpose. However, what's just as interesting is Intel's statements that "the Ultrabook will combine the performance of a laptop with tablet‑like features in a thin, light and elegant design”, and that "eventually you'll think of an Ultrabook as a tablet when you want it, a PC when you need it”. With so many musical apps now appearing for Apple's iPad family, it can only be a matter of time before PC users can get in on the act without changing platforms.