How To Patch Effects & Processors 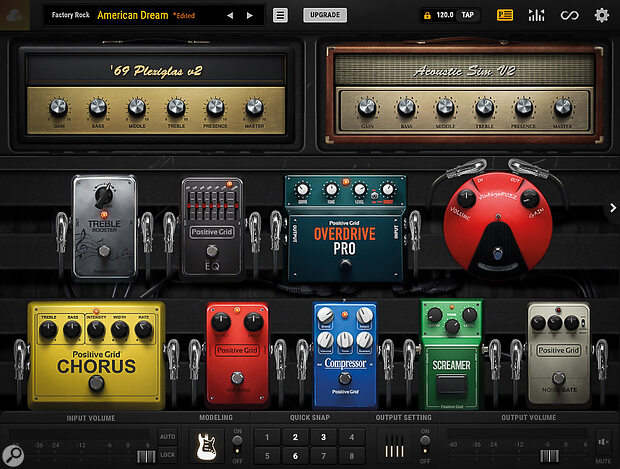 The roles of the various signal processors and effects used in audio production are pretty well understood by most musicians, but it's not always obvious where they should be patched into the signal chain to give the best results.

When recording was in its infancy, we were so impressed at being able to record four separate tracks at different times, and then being able to balance the results afterwards, that nothing much else seemed to matter other than, perhaps, a touch of spring reverb. The fact that all this was possible was wonder enough — then along came digital effects, and the goal posts moved. From then on, we had to contend with aux sends, insert points, and mixing consoles with routing systems so advanced that they rivalled professional desks. Small wonder, then, that confusion sometimes exists over where best to patch a particular piece of outboard gear, and even if you know the ground rules, there may sometimes still be a better way of doing things if you stop to think about it.

For the benefit of those new to the concept of patching outboard gear, I like to define the various pieces of equipment as either Effects or Processors, according to what they do and how they do it. This may seems pedantic, especially when most boxes that don't actually produce noise in their own right tend to get referred to as processors, but if you'll humour me for a while, you'll see that it helps make things a lot clearer. The main reason for splitting boxes up into these two groups is that there are certain restrictions on how processors can be connected, while effects (or FX) enjoy a little more flexibility.

Processors, in this instance, are defined as boxes that take in a signal, do something to it, and produce a modified version of the signal at the output socket. None of the original signal is added to the processed signal, though in the case of compressors and gates, the output is actually a version of the original signal which has had dynamic gain changes applied to it. The only grey area is the exciter which, for practical reasons, is best defined as a processor, even though it mixes both original and processed sound internally.

If the device modifies either the gain of a sound or filters it (as in the case of EQ and SNR), it's pretty safe to assume it's a processor.

Effects, on the other hand, are designed to be added to an existing signal, such that the result is a mixture of the original signal and the effect. One rule‑of‑thumb guide to deciding which is which is to define Effects as those boxes which rely on delay circuitry to work; in other words:

You can also be certain you're dealing with an Effect if a knob (or parameter) allows you to set the effect/dry (un‑effected) balance.

A dilemma arises when it comes to multi‑effects boxes, because most can function as either effects or processors, and a multi‑effects patch might comprise both! However, if you visualise the different effects and processors in a patch as physically separate boxes, then apply the following guidelines, you shouldn't go too far wrong.

On a modern mixing console, the post‑fade aux sends, commonly known as effects sends, allow some of the signal passing through a mixer channel to be sent to an effects unit such as a reverb or delay device. The output from the FX device is then brought back into the mixer through a spare channel or an effects return (which is really just another channel but without the frills) to be blended in with the original sound. Because each channel has its own aux send level controls, the same FX unit can be used by several channels simultaneously; the aux send controls simply work as 'more or less effect' knobs, enabling the user to set up different levels of effect for each channel — and when the channel fader is turned down, the effects level changes accordingly.

The one rule that should be written in stone is that under all normal circumstances, only effects can be patched in via the aux send/return system. If you were to do the same with a processor such as an EQ unit, you'd just be adding EQ'd sound to the original sound which would, in effect, 'dilute' the effect of the EQ.

The other main method of patching external boxes into a mixer is to use the channel, Group and Master insert points. An insert point simply breaks the original signal path and routes all the signal through the external device plugged into it, rather like putting a fuzz pedal between your guitar and amp. Processors should always be connected via insert points (unless you achieve the same thing externally, by patching a compressor between the output of a tape machine and the line input of a mixer, for example), though effects may also be patched into insert points as long as you don't want to use the effect on more than one channel or Group of channels. So far, it's all pretty basic, and many of you will know these things already, but for the benefit of the viewers at home, I'd like to 'firm up' a few points before moving on.

There are two ways to add effects to channels routed via a subgroup; you can either connect the effects unit normally, via the aux sends, or patch the effects unit in via the Group insert points. Working via the aux sends affords independent control over the amount of level added to each channel, but you must route the output of the effects unit to the same Subgroup (or pair, if you're working in stereo), otherwise the effects level won't change whenever you move the Group fader. Of course, this presents a problem when you want to use your one and only reverb unit both on the drum Subgroup and on the vocals, which may be routed to a different Group or direct to the stereo mix. In this case, the only option is to route the reverb directly into the stereo mix and do any drum track level changes by moving all the drum channel faders at once, leaving the Group faders alone. This isn't particularly convenient, but as the eskimo found out when he nearly drowned after trying to keep warm by burning his canoe — you can't have your kayak and heat it!

Patching the FX unit into the Group insert points offers little advantage because it means everything in the Group gets the same treatment, but if that's what you want to achieve, then doing it this way is likely to give the best noise performance. It's a little known fact that, because aux sends feed a mix buss, noise is generated which is proportional to the number of mixer channels, even if the aux knobs are turned right down. Using the insert points instead neatly avoids this.

If you want to process a Group, the Group insert points are the only way in. A typical application might be to compress a stereo backing vocal mix, or even a drum mix, which means using a stereo compressor patched into a Group pair. Don't forget to set the compressor to stereo link mode in this instance.

As intimated earlier, when it comes to patching in a composite effect created by a multi‑effects unit, it has to be considered as a collection of separate blocks for the purpose of routing. For example, let's assume that you have a compressor patch followed by a reverb; patching this in via the send/return system will leave the dry sound unchanged (because that's coming directly through the mixer channel), but the reverb will be fed by a compressed version of that signal, resulting in a more consistent level of reverb. It's all a matter of thinking about what you actually want to achieve, and then arranging the patching to make it happen.

If a single instrument or tape track needs to be treated using a multi‑effects processor, the best noise performance will be achieved either by patching it via the channel insert points or by placing the unit in the signal path between the instrument/tape machine and the mixer input. Many are the occasions on which an effects unit has been blamed for being noisy, when the real culprit is mix buss noise from the aux send system.