With the Chord Pads configured, it’s time to write a song.

Cubase 8 can help you experiment with different chords and voicings to fake a good performance.

In last month’s Cubase workshop (http://sosm.ag/cubase-0515), we used both the new Chord Pad functionality and the Chord Assistant to select a series of harmonically related chords that we might use for a songwriting session. This month we’ll build on that by exploring the performance options provided by the Chord Pads. These options will enable you to inject some life into your songwriting, and might speed the whole process up for you too.

We finished last month’s workshop, courtesy of some help from the Chord Assistant, with our Chord Pads containing some classic chords in C major, a small number of extra harmonically related chords and alternative voicings of the three major chords C, F and G. The next stage of the writing process is actually about two things: finding some nice chord sequences from which to build your various song elements (verse, chorus and bridge, for example), and creating a ‘performance’ of these various sequences that captures the mood you’re seeking and inspires you to develop the song further.

Pianists and guitarists will often vary their fingering/neck position when playing chords, just to add a little variation to an otherwise repetitive part — while these different voicings do result in the same chord, they sound different. Cubase’s Chord Pads can replicate this via the Adaptive Voicing system. When playing any Chord Pad, you can also step through some alternative voicings using the Voicings Remote Control keys (by default, C2 and C#2, as explained last month).

The Players tab provides a series of styles where your chords will be constructed in different ways.However, you can also link the voicing of multiple Chord Pads to a single ‘master’ Chord Pad. In our example, I’ve set the C chord (on C1) as the ‘reference for adaptive voicing’ (right-click on the pad to access this option). Other pads can then be set to follow the Adaptive Voicing settings of this reference, and those pads will then have a small AV symbol top-right (again, right-click on a pad to access this setting). 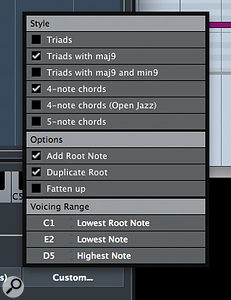 The Customise option allows you to control how simple or how complex you want your chords and their voicings to be.My duplicated ‘core’ chords (C, F and G) are not set to AV, so their voicing will not change ‘globally’. These duplicates serve two purposes. First, they mean I have two different voicings available at all times — this can be great for adding variety without having to use the Voicing Remote Control for every change. Second, as it’s possible to play multiple chord pads at the same time, I can generate a really ‘big’ chord by hitting both pads, provided that they’re set to trigger different voicings.

It’s worth noting that the Mod Wheel provides a global voicing adjustment too. This overrides any individual settings you might already have carefully configured, but you can choose to ‘lock’ a Chord Pad’s settings to avoid this: right-click and select the Lock option from the pop-up menu (a small L will appear at the top-left of the Chord Pad to signify this).

There are plenty of classic songs written with just a handful of major or minor chords but, when done tastefully, adding a little extra harmonic interest can help keep the listener’s attention, not to mention haul you out of a creative rut. I’ve already built some of this into my chord sequence (the Amin9, Cmaj7 and Fmaj7 chords) but you can also use the Tension Remote Control option (by default, D2 and D#2) to add further colour as you perform. For example, a standard C-major chord can be stepped through C9, C6, C6/9 and Cmaj7 varieties, each bringing a different harmonic feel. OK, it might not be enough to appeal to the die-hard jazz fans out there, but it’s probably plenty for the budding pop/rock/EDM songwriter.

If you click the Edit (e) button, the Chord Pad’s Player tab allows you to choose between several different piano and guitar-based chord ‘styles’. These increase in complexity running from left to right; Rock/Easy Jazz produces quite simple chords while the Jazz (Five Sounds) ones are more complex.

Cubase includes a varied collection of MIDI patterns that can be used with the Chord Pad’s Pattern option.These variations are based on voicing differences but also upon more complex chord forms, and if you click on the Customise option you can adjust the various options to meet your needs. For example, you can add additional root notes, ‘fattening up’ the way the chords are played and add maj9 and min9 options. The last two are interesting as, when engaged, they mean the Remote Control Voicing modifiers can give you something other than just your standard chord (they apply both voicing and tension adjustments).

Once you have a chord progression you like, you can use it to add chord changes to the Chord Track and then enable other MIDI (or monophonic audio) tracks to follow the chord sequence.That said, if you want to keep things simple, turn off all the options other than triads and four-note chords. And if you find that the Tension Remote Control modifiers don’t seem to change the sound of the chord, this is where to look; make sure options other than the Triads are engaged.

The Player section offers one further interesting option: the ability to trigger a MIDI pattern using the Chord Pads. Via the Pattern tab, the Import MIDI loop option opens a browser to select a suitable MIDI pattern. Once done, when you play a note to trigger a pad, the pattern is played using notes from the currently selected chord. If you used the Remote Control keys to adjust the voicing of the chord, then the notes used in the pattern are re-voiced also.

This is a very clever feature of the Chord Pad system. It enables you to do things like create rhythmic parts or to mimic a gently strummed guitar chord. But, as a quick aside, it would be great to see Steinberg take it a step further and allow you to access multiple patterns. This could either be the option to load a different pattern on each pad or the ability to move between a number of different patterns via the Remote Control modifiers. Offering both approaches would be even better — the possibilities would be almost limitless...

The E2/F2 Remote Control keys will transpose an individual Chord Pad, but if you want to add a complete key change (something of a cliché, but one that can still be used — sparingly — to good effect) either click the Functions menu (the down arrow icon on the left edge of the Chord Pad panel) and choose Transpose All Pads, or use the pitch wheel to apply a global transpose. The former applies to all Chord Pads, while the latter only applies to any Chord Pad that you haven’t chosen to lock.

Going For A Song

With your chords selected and these performance options under your belt, it’s time for some single-finger fun. Hit the record button, trigger some pads and throw in some voicing or pattern-based variations. This is one of the easiest ways to experiment with chord progressions. If you record your Chord Pad performance, the MIDI part created contains the full chords, not just the trigger notes. Note that any MIDI notes that lie beyond those keys configured to control the Chord Pads (shown in blue) or the Remote Control keys (shown in green) behave normally, so if you want to play some right-hand melody/harmony notes over your chords then you can. 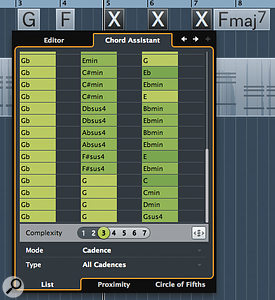 If you are struggling to link two song sections together via the Chord Track, the Chord Assistant can suggest some possible chord sequences.Once you’ve created a few sequences that you like, you can use the standard Project window editing tools to begin organising them along the timeline into song sections. With a first pass at your song structure in place, the next step might be to turn to the Chord Track. Simply select the various MIDI parts and then execute the Project / Chord Track / Create Chord Symbols option. This will create a Chord Track and place all your chord changes on it. As you develop your song idea, this opens up four further possibilities, the first three of which were covered in more detail in the June 2013 ‘Re-chord Industry’ Cubase workshop (http://sosm.ag/cubase7-chordtrack):

1. You can force other MIDI instruments, or monophonic audio parts that have been analysed by Variaudio, to follow the Chord Track.

2. You can re-sequence and/or edit the chord progression in the Chord Track as your song idea develops and make your tracks follow those changes automatically.

3. If you have two sequences that you like (for example, a verse and chorus), but can’t find a suitable set of chords to link those parts, you can use the Chord Assistant to find ‘missing’ chords that will help make that transition.

4. With the Chord Track in place, whatever your level of keyboard skills, you can create further MIDI-based parts using other instrument sounds — dip into the ‘Keyboard Fraud’ workshop from SOS November 2013 for guidance on this (http://sosm.ag/cubase-keyboard-fraud).

While working with a software songwriting partner might not be quite as much fun as with a real human being, the Chord Pads, Chord Assistant and Chord Track combine to provide you with genuinely useful help in developing your song ideas. And best of all, if it does turn out to be a hit, you won’t have to deal with any of those difficult discussions surrounding royalty splits!