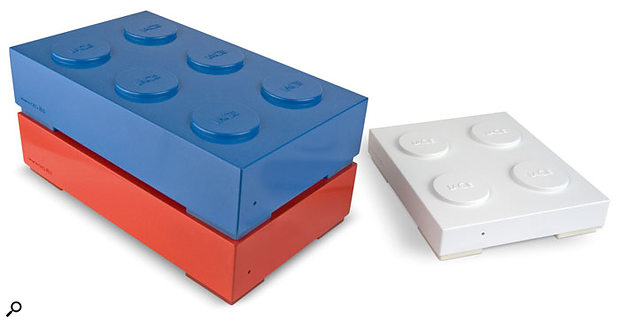 Lacie's new Brick drives may provide you with lots of external USB 2.0 storage potential, but your data won't last long if the kids get hold of them!

We revisit the subject of IRQ sharing, to see if the problems it used to cause for musicians have been solved — as well as discussing a partitioning controversy...

Years ago, many musicians, especially those running Windows 95 and 98, had problems with certain soundcards if these soundcards ever had to share the same IRQ (Interrupt ReQuest) with another device. The reason for the enforced sharing might have been because the PCI slot in which the card was installed had been hardwired with another slot or motherboard device, or because Windows didn't have enough spare IRQs to go round and decided to share the one allocated to the soundcard's slot with something else, seemingly at random.

The resulting problems ranged from occasional clicks and pops that wouldn't go away, through having to run at a much higher latency than normal, to refusal of the PC to boot up at all as soon as the soundcard had been placed in a particular PCI slot. This was nearly always because one of the shared devices had drivers that assumed they were in total charge of an interrupt and refused to let go until they were finished with it. Sometimes it was the soundcard drivers that didn't like sharing, and sometimes it was the fault of the other device.

Over the years, I've provided extensive advice on how to make sure you have a unique IRQ for your PCI soundcard (most notably in 'Hitting The Slot', SOS May 2003) and, happily, IRQ-sharing problems have now almost completely disappeared. This is partly down to the wider use in motherboards of APIC (Advanced Programmable Interrupt Controller) chips, which provide 24 or more Interrupts instead of the 16 offered by the older PIC (Programmable Interrupt Controller) chips, but the arrival of Windows XP (which implemented IRQ sharing in a far more reliable manner) and more co-operative drivers have also played their part.

Nowadays it's very likely that Windows XP will allocate a unique interrupt to your PCI audio interface (it did for all three of mine, with no help from me). However, IRQ sharing is still commonplace among USB and Firewire devices, and it doesn't prevent us from plugging multiple devices into USB hubs or connecting chains of Firewire peripherals, and without too many problems, which proves that IRQ sharing can work.

In fact, I haven't heard of any audio-interface problems specifically traced to IRQ sharing for a long time, so while choosing the most suitable PCI slot to avoid sharing is still sensible advice (it does save a tiny extra amount of overhead), no-one should be following the old advice to switch Windows XP from its default ACPI mode to Standard mode to set their IRQs manually. If your motherboard features an APIC chip, doing this will reduce the number of IRQs from 24 to 16 and make things worse. If you do get click and pop problems that don't respond to the usual tweaks, they're more likely to be related to PCI latency (see PC Notes October 2004), or possibly to PCI Express issues.

Lacie drives stick together: Lacie have produced a new range of USB 2.0 hard drives that look just like Lego bricks (see photo above). Available in white (160GB), blue (300GB) and red (250GB and 500GB) versions, they are, of course, stackable. No doubt they will become highly fashionable, although I can't help thinking that your irreplaceable data won't be quite as safe on a hard drive that positively encourages both visitors and children to pick it up and play with it!

Firefox net browser updated to 1.5: By the time you read this, version 1.5 of Mozilla's highly secure Firefox browser will have been released, featuring drag-and-drop re-ordering of its multi-tabbed interface, more intelligent caching of pages accessed via the forward and back buttons, and background updates of both the application and any extensions you may have installed, so that any security issues can be patched automatically 'behind the scenes'. It's already reported to be rock-solid, and is still only a 5MB download. Some third-party version 1.0 extensions aren't compatible with the 1.5 browser, but many will also have been updated to bring them back into sync by the time of its release.

New peek at Vista: Microsoft released another beta version of their forthcoming Vista Operating System in late November. Build 5259 contains new versions of Internet Explorer 7, Windows Media Player 11 and Media Center, and incorporates anti-spyware features. Microsoft have also announced that there could well be seven different Editions of the product when it finally ships (Starter, Home Basic, Home Premium, Professional, Small Business, Enterprise and Ultimate). Judging by the current list of differences (which will, no doubt, change by release date), musicians are most likely to find the Home Basic Edition or Home Premium Edition the most suitable, but expect global confusion sometime during 2006.

In the PC Notes column of September 2005, I discussed the problems that some musicians had been having with certain motherboards featuring the new PCI Express slots, and specifically some of those with the nForce 4 chip set. The villains of the piece appear to be high-bandwidth PCI-E graphics cards, which seem to hog the PCI buss. Certainly, the more powerful the graphics card, the worse the problems become.

If you look in Device Manager, using the option to view 'Devices By Connection', you'll see that the PCI buss hosts many other classes of device, including Firewire and USB devices and your hard drives, which may, therefore, all be affected by such buss hogging. Anyone whose computer is prone to this particular chip set problem won't notice the 'hogging' unless a specific device requires a lot of bandwidth, which is why PCI soundcards, DSP cards and Firewire interfaces have been reported to have problems, forcing some musicians to raise their buffer size to avoid clicks and pops. Processor overhead is also reportedly larger than expected, so the problems also tend to appear when overhead is already high — the exact scenario faced by musicians running loads of plug-ins and soft synths.

These issues should disappear for anyone buying a PCI Express soundcard, but the interface manufacturer's Round Table in SOS December 2005 suggested that few manufacturers are developing new PCI Express products. Mind you, some people remain convinced that at least one or two manufacturers are beavering away in secret, and that we'll see a few new interfaces early in 2006.

This leaves those with PCI and Firewire devices (and possibly a few multi-channel USB 2.0 interfaces). Firewire device owners should now be able to bypass the problem (if they experience it) by buying one of the new PCI Express Firewire adaptor cards, so that they no longer rely on the PCI buss. PCI-card owners have several ways forward. As I mentioned in September, using a fairly low-powered graphics card such as Nvidia's 6200 or ATI's Radeon X300 (if you have a PCI Express motherboard) can significantly reduce audio problems, and this approach has now been proven to work well with Intel's 915/925 dual-core motherboards. However, the best news for fans of the Intel range is that their new 955 dual-core P4 chip set doesn't seem to be causing bandwidth-hogging problems at all, even with fast graphics cards, so this seems the current best choice for anyone interested in a new Intel-based dual-core PC. Good news for AMD enthusiasts is that while single-core AMD motherboards featuring PCI Express slots still seem to be causing audio problems, the same boards do seem to work a lot better with audio apps when fitted with one of the new dual-core AMD X2 processors. Exceptions such as Tyan's rather expensive S2895 Dual Opteron motherboard are also continuing to provide excellent performance without any hogging problems. 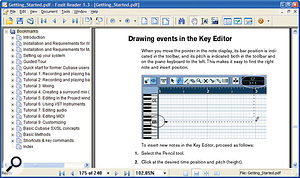 Fancy a PDF utility for reading your manuals that's freeware, only 1MB in size and loads in a flash? Foxit's PDF Reader ticks all the right boxes. In my continuing quest to bring worthy freeware to your attention, this month I'm focusing on Foxit Software's PDF Reader (www.foxitsoftware.com). We all need a PDF reader to view the various documents and manuals that accompany most of today's software applications, but nearly all of us accept and install Adobe's freeware Acrobat Reader by default, as this is already bundled with many audio applications. However, the latest version is a hefty 20MB download, which seems very large for what it does, while the Foxit reader is just 1MB in size and launches much more quickly.

The latest version, which is 1.3, runs on Windows 95, 98, NT, 2000, XP and 2003, and I could find no commercial PDF documents that it didn't display identically to Adobe's Acrobat Reader. Foxit's PDF Reader also includes a Typewriter feature that lets you add text to existing PDF documents and print out the modified version, while the Pro version, for just $39, lets you save such modified documents, as well as converting pages or the whole PDF file to pure text form (normally resulting in much smaller files). Other products in the Foxit range include a fully-featured PDF Editor with a comprehensive set of features. That costs just $99, which is far cheaper than many alternatives. Thanks to SOS reader Bill Blackledge for bringing this range to my attention.

Since my feature on the subject in SOS May 2005 there's been some discussion and controversy on the SOS Forums about the best way to partition drives for audio. I'm pleased by the healthy debate, as my suggested layouts were just that. As I said in that feature, "you don't have to religiously follow any of the schemes I've outlined here, since once you've grasped the reasons for each of my suggestions you can adapt them to your own needs."

The most contentious issue seems to be my suggestion of a small outer 'Current Project' partition on your audio drive, with completed projects being moved to the inner (slower) partition for backup. Some people maintain that this is unlikely to yield measurable benefits. Well, this is entirely possible, depending on how many simultaneous tracks you need. For example, my Seagate Barracuda drives measure about 58MB/second sustained transfer rate on the outside, and I've run up to 76 24-bit/96kHz tracks on an empty one. However, the same drive only measures about 32MB/second on the inside, so when it's almost full and is filling its 'inside' area, maximum track count is likely to drop to under 40 at 24-bit/96kHz.

So if you record multitrack epics, it makes sense to reserve the faster area of the drive for your current project. However, if your songs never need more than 40 tracks at 24-bit/96kHz (in this example), creating a dedicated 'Current Project' partition may not provide any benefit — although it may be reassuring that using an outside partition for recording means that you're not running the drive so close to its limits. The other possible advantage is that you can back up the 'Current Project' partition in one 'hit', as an image file, using a utility such as Norton's Ghost. An image file preserves exact file layout, which may be important if your sequencer places audio chunks in a certain way. Some musicians have experienced audio 'stuttering' after defragmenting an audio partition, a process that can change file layout.

On a related topic, remember that if you've got a partitioning utility such as Partition Magic (www.symantec.com) or Disk Director Suite (www.acronis.com) you can change partition size and arrangement any time. You'll get maximum potential from the outer sections of each drive (on the left-hand side as displayed by most utilities).