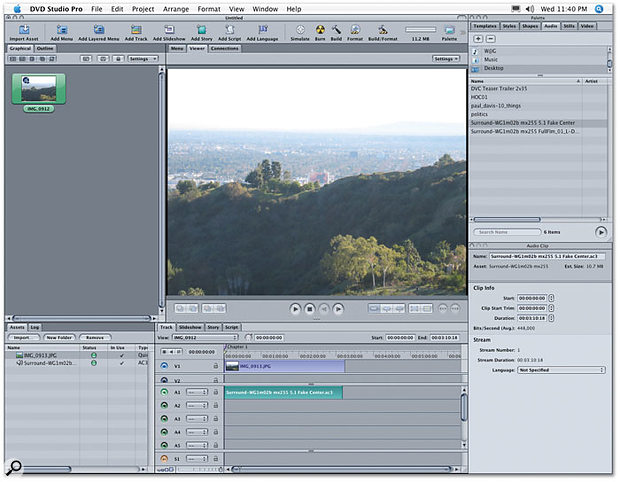 Apple's DVD Studio Pro application can be used to create full-featured DVD-Video discs, but it's also a useful way for musicians and audio engineers to conveniently share surround mixes. Note how the image and audio files appear on the timeline, on the V1 and A1 tracks respectively, at the bottom of the main window.

With the rumour mills already grinding away in preparation for next month's Macworld show, we make a brief survey of 2005, as well as taking a look at using Apple's DVD Studio Pro application to distribute surround mixes.

December is always a good month for nostalgia, and while the date on the front of this magazine says February, as I write this it's still December, which made me think about what a good year it's been for Apple. The year 2005 started well, with a Macworld show that brought the Mac Mini, iPod Shuffle and iLife 05, featuring Garage Band 2 with its new score-editing options and more, into the world. The Mac Mini (reviewed in May 2005's SOS) was a turning point for Apple: a low-cost, entry-level Mac computer. And even though it's not the most powerful system Apple markets, a Mac Mini and Logic Express is a pretty remarkable 'first' system for anyone new to computer music.

The iPod Shuffle was the first new iPod of 2005, and by the end of the year Apple had replaced its entire iPod line-up: the unbelievably small iPod Nano was introduced, along with a new video-capable iPod, while video content — most notably, TV shows — became available to US customers of the iTunes Music Store. In fact, just before Christmas, Apple announced new content from channels such as NBC and the Sci-Fi channel, including, er, Knight Rider! But 2005 was also about transitions — including the transition from Power PC chips to Intel's x86 architecture, a move that was both expected and shocking. And while, at present, the move to PCI Express seems daunting for new Power Mac customers, it will be interesting to see how music software developers respond to the challenge of Universal Binaries (the term used to describe an application that contains the code to run on both architectures) as Intel Macs appear in 2006.

By the time you read this month's column, Steve Jobs will already have been on the stage at the San Francisco Macworld show on January 9th and, hopefully, will have started the year with a selection of new and interesting products. If the current rumours are to be believed, a media-orientated Mac Mini might be in the offing, offering features such as the Front Row interface from the new iMac, and there's even speculation about Intel-based Macs appearing sooner than originally expected...

Personally, I'll be interested to see whether iLife gets its annual makeover, and, if so, whether a Garage Band 3 will be introduced, and whether last year's rumours concerning Apple offering a consumer audio interface might still yield some substance. Speaking of Apple's music offerings, it'll be even more interesting to see what happens with Logic Pro in 2006: despite a strong presence, Apple have never made a major product introduction at a NAMM show. And with Apple's other 'Pro' applications moving onto what seems to be a yearly development cycle, September 2004's Logic 7 announcement is starting to seem rather distant. So here's to an Emagical Christmas, and an Intel new year!

I Want My DVD

When everyone worked in stereo, letting other people hear your work was pretty easy. As recording your own CDs became affordable towards the end of the '90s, CDs became a pretty easy way of distributing your work as one-offs for clients, friends and family, or even preparing masters for distribution. However, with many musicians and audio engineers now working (or moving towards) surround sound on a day-to-day basis, it's a lot less obvious how to share a surround mix with the same convenience — in terms of both creation and playback.

The simplest way to share a surround mix is simply to put the audio data files on a CD-ROM, but this means that the person you're giving the disc to has to a) know what to do with the files, and b) have enough equipment to play them back, even taking the speakers out of the equation. The successors to CD for audio distribution are DVD-A (Audio) and SACD (Super Audio Compact Disc), which both offer multi-channel, high-resolution audio. SACD has one big limitation for the content creator: the equipment you need to burn a one-off SACD disc is fairly expensive, and it doesn't seem as though it's going to get much cheaper any time soon, since SACD as a format is far from reaching a critical mass.

DVD-A discs, on the other hand, can be easily created by any Mac user who has a Super Drive, using Minnetonka's Discwelder Bronze (www.discwelder.com), which allows you to create surround tracks at up to 24-bit/48kHz with a maximum of six channels, or stereo tracks at up to 192kHz. Discwelder Bronze is available for just $99, but while it's cheap and easy to create DVD-A discs to distribute your work, the format suffers from the same problem as SACD: not everyone has a player compatible with DVD-A-compatible discs.

However, there's yet another possibility (and I'd like to thank my friend Geoff Foster for showing me this), which is to create a DVD-Video disc to demo your surround mixes. In many ways, this is the perfect compromise: most people have DVD players these days, and a large number of these people also have a surround-capable speaker configuration of some kind for watching movies. At worst, even if someone doesn't have the ability to listen in surround, the audio encoders for DVD-Video audio tracks, such as Dolby Digital, have the ability to perform fold-downs, so that at least people can still listen to your music from the same disc, even if they don't have access to a surround setup.

So how do you create a DVD-Video disc? Even though every Mac with a Super Drive is supplied with iDVD, which can create DVD-Video discs, it can only author discs with stereo audio. However, Apple's DVD Studio Pro application is a full-blown DVD-Video authoring system that includes a Dolby Digital encoder with support for 5.1 audio. As you might be aware, Dolby Digital uses AC3 lossy compression (similar to AAC) and DVD-Video supports a relatively low bit-rate of just 448K per second for 5.1 audio, but the results are still surprisingly satisfactory in most situations. 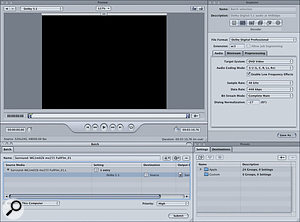 1. Load Compressor (which you should be able to find in your Applications folder), choose the 'File / Import Surround Sound Group' option (or press Apple-Shift-I), and a panel will appear in the Batch window with seven speaker buttons, for L, C, R, Ls, Cs, Rs and LFE.

2. There are two ways to assign an audio file to a channel: you can either click on the relevant speaker button and choose the required file from the file selector, or, alternatively, you can simply drag the appropriate audio files from the Finder on to the speaker buttons. Click OK when you've finished that step.

3. In the Batch window you should notice an entry appear that represents the surround sound group you just created. Select this entry and, in the Setting column, click the pop-up menu button and choose 'Audio Formats / Dolby 5.1'. Make sure the row in the list that has 'Dolby 5.1' listed in the Settings column is selected.

4. For now, leave the default settings as they are, and in the Batch window choose a Destination for the AC3 file from the Destination column's pop-up menu, or double-click the file name in the Output column to set a different name for the destination file you're about to create.

5. Once you're ready, click on Submit in the Batch window, and the Batch Monitor will appear, to inform you of progress as the AC3 file is created.

DVD Studio Pro can be pretty complicated, but fortunately you don't need to dip your toes too far into the water to create a disc containing some audio. Once you've created AC3 files of your surround mixes (see 'Creating Surround AC3 Files' box for more information), load DVD Studio Pro and at the 'Welcome to DVD Studio Pro ' window, choose the Advanced layout, set PAL or NTSC (if you're in Europe you'll want PAL, while if you're in the US you'll want NTSC, although most DVD players will actually handle NTSC these days, no matter what display you're using), set Standard Definition, and use English as the default language. When you click OK, an empty project will automatically be created for you. We're going to make a really simple disc with just one track that plays as soon as you insert the disc in a DVD player.

3. Drag the AC3 file containing the music you want to put on the disc onto the 'Track 1' object in DVD Studio Pro and you should notice an audio object appear on the timeline at the bottom-centre of the DVD Studio Pro window.

4. We're creating a DVD-Video disc, so we have to add some video content, then the disc will play properly. The easiest thing is to simply import a picture file. This is actually a good thing to do, as it enables you to create a title page with the track name, your name, contact info, and so on. At the very least it could just be a pretty picture! To do this, simply drag a picture from the Finder on to the 'Track 1' object in DVD Studio Pro and you'll notice the name of this object change to the name of the picture, and an object representing the picture appear on the V1 (first video track) on the timeline.

5. Next, make sure the picture object is the same length as (or just slightly longer than) the audio object: hover the mouse over the picture object until the mouse cursor changes to a resize-right tool (as seen in other Apple 'Pro' applications), then drag the object's end point to mark out the new length.

That's all there is to it. You can use DVD Studio Pro 's built-in DVD Player Simulator to see how the disc will work by clicking the Simulate button in the main window's toolbar. Alternatively, click Burn on the toolbar, insert DVD-R disc and DVD Studio Pro will burn your disc for you. We'll be looking at creating more complicated, multitrack discs in a future Apple Notes column.