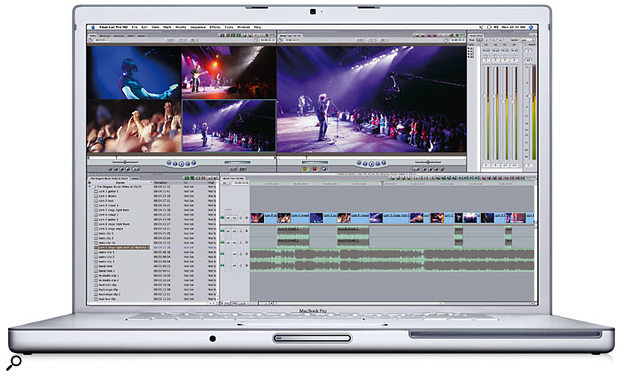 The 17-inch Mac Book Pro builds on the spec of the 15-inch model by adding a larger display, along with a Firewire 800 port, an extra USB 2.0 port and all the optional extras. Could this be the ultimate mobile music system? (Photo courtesy of Apple.)

In just a few weeks, Apple have completed the transition to Intel processors for their entire Mac portable line, starting with a 17-inch Mac Book Pro and ending with the introduction of the Mac Book family of laptops to replace the iBook. Apple Notes assesses the new machines.

As Apple try to gain a larger share of the video post-production market, the NAB (National Association of Broadcasters) show, held annually in Las Vegas, has become increasingly important. This year's NAB show saw Apple announce the 17-inch Mac Book Pro, which makes sense given the growing number of professionals (in all media worlds, including video and audio) favouring laptop-based systems. And to show just how feasible this really is, Apple ran the majority of their demos of Final Cut Studio on the new 17-inch Mac Book Pro.

The 17-inch Mac Book Pro is functionally almost identical to the original 15-inch Mac Book Pro, which we discussed briefly in March's Apple Notes, but with a few important improvements. Obviously, from a physical perspective the 17-inch model is so-called for its 17-inch display, with a resolution of 1680 x 1050 pixels — the same as the previous 17-inch Powerbook and Apple's 20-inch Cinema Display. Since this is only 1.6 inches larger on the diagonal than the 1440 x 900 15.4-inch display on the smaller Mac Book Pro, the 17-inch's dimensions of 15.4 x 10.4 inches make this new model not so much bigger than the 14.1 x 9.6-inch dimensions of the 15-inch, and both Mac Book Pros are one inch thick. For those, like myself, who always felt the 17-inch was a bit on the big side, maybe it's time to reconsider.

However, if the 17-inch Mac Book Pro's display doesn't convince you, its connectivity might, as Apple have included a Firewire 800 port on the 17-inch (acknowledging the criticism levelled at the 15-inch model for lacking this feature), along with three USB 2.0 ports (the 15-inch, like all of Apple's most recent portables, has two), followed by all the usual suspects: one Firewire 400 port, Gigabit Ethernet, an Express Card/34 slot, a dual-link-capable DVI port with support for the 30-inch Cinema Display, two mini-jacks providing both analogue and digital audio input and output, and the new Magsafe connector for power.

Like the 15-inch model, the 17-inch features a built-in iSight camera and Front Row media software with an Apple Remote (although 15-inch users might be jealous of the eight-speed dual-layer Super Drive included with the 17-inch Mac Book Pro, compared to the four-speed single-layer Super Drive featured in their model). Unlike some previous 17-inch models and the 15-inch Mac Book Pro, the 17-inch Mac Book Pro is available in just one configuration: 2.16GHz Intel Core Duo processor, 1GB 667MHz DDR2 SDRAM, ATI Mobility Radeon X1600 graphics with 256MB GDDR3 SDRAM, and a 120GB 5400RPM or 100GB 7200RPM SATA drive.

In US pricing, you end up paying an extra $200 for the 17-inch Mac Book Pro over the 15-inch model, if you take into account the hard drive option, and this gets you the larger screen, along with a Firewire 800 port and an extra USB 2.0 port, which isn't bad value for money. It's perhaps arguable that the price differentiation between the two models should be greater. The Firewire 800 port might be a clincher for some, but it's really frustrating for those who would prefer the 15-inch form factor, especially given that the previous generation of 15-inch Aluminium Power Books all had the elusive 800 port. (As a footnote, this month I've been working on a review of the 15-inch model from the perspective of an audio engineer and musician, but unfortunately it didn't make it into this issue. So for a full, in-depth analysis of the Mac Book Pro, be sure to check out next month's SOS.)

Universal Reason & Rewire After All

For users of Rewire-based applications other than Reason, Propellerhead also released Rewire 1.7, which is also a Universal Binary, meaning that Intel Mac users can now start using Rewire in earnest with Intel-native applications such as Logic and Ableton's Live.

With Apple's professional line of laptops being christened 'Mac Book Pro', it was widely assumed that the consumer version would be known simply as the 'Mac Book', which indeed turned out to be the case when Apple replaced the iBook line with a new Mac Book family this month. Although the design of the Mac Book is clearly a natural evolution from the iBook, there many rather more radical departures: for starters, the new Mac Books feature a 13.3-inch widescreen display with a 1280 x 800 resolution — a big improvement over the previous 12.1-inch 1024 x 768 display. And the TFT panel used is now of the 'glossy' variety, which, according to Apple, "lets you view graphics, photos and videos with greater colour saturation." In practice, this means that the screen is noticeably more reflective compared to the previous matt screens. Interestingly, those buying a Mac Book Pro can now choose between a matt and a glossy screen for no extra charge. Personally, despite the increased reflectivity, I think I might actually prefer the better contrast in the glossy screen. 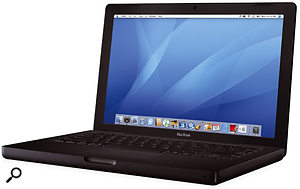 Better in black: with the advent of the high-end Mac Book, this is the first time since the G3-based Powerbooks that you can buy a black Mac portable. (Photo courtesy of Apple.)The new Mac Book case looks quite appealing, at just 1.08 inches thick, and is available in a traditional iBook-style white finish or a new Nano-like black finish, although the colour finish you get depends on which model you purchase. Instead of the previous hooking latch system that kept the iBook shut, the Mac Book uses a much slicker magnetic latch reminiscent of the clamshell iBooks of yesteryear. The keyboard is a radical departure from any current or previous Apple portable, and although it looks as though the keys are spaced further apart than on the Mac Book Pro, it turns out that the dimensions are identical. The keyboard felt alright to type with (although I think I prefer the Pro's keyboard), but since I only had a brief play with the Mac Book I can't really comment on how comfortable it is for extended periods of typing.

Other nice touches in the Mac Book (especially when you consider the pricing of these models) that are directly inherited from the Mac Book Pro include the built-in iSight camera and Front Row software with the Apple Remote. You also get the two-finger scrolling-capable trackpad, which is much larger than the one used on the iBook, and the Mac Book also features Apple's new Magsafe power connector. With all of Apple's portables now using Magsafe connectors, let's hope the necessary accessories for those on the move will be forthcoming.

There are three models of Mac Book available, with the entry-level and mid-range models coming in white and the high-end model being sold with a highly desirable black finish. The entry-level model comes with a 1.83GHz Core Duo processor, while the other models feature a 2GHz Core Duo, the same as on the entry-level Mac Book Pro. All models offer a 2MB Level-2 Cache and a 667MHz system buss (also the same as on the Mac Book Pro) and ship with 512MB 667MHz DDR2 SDRAM. But a big difference (compared with the Mac Book Pro and previous iBook models) is that the Mac Book uses an Intel GMA950 processor for graphics, with 64MB of memory that's shared with the main computer memory.

The use of shared graphics means that the Mac Book won't be the best machine for demanding games such as Quake 4, but for most music software that draws 2D graphics without hardware acceleration, it probably won't make a dramatic difference initially. I say "initially" because eventually 2D graphics will be fully hardware accelerated, and at that point those using systems with shared graphics memory might achieve significantly less performance. However, while shared graphics memory is often best avoided by those looking for the best all-round system performance, early reports indicate that it may not be a deal-breaking feature in the case of the new Mac Book, for those seeking a low-cost Mac portable that's music and audio capable.

The low-end model features a slot-loading Combo drive, while the upper two models have a slot-loading four-speed Super Drive. Turning to hard drives, the lower two models feature a 60GB 5400RPM SATA drive, with the high-end model offering an 80GB device. A variety of options is available when purchasing, including 100GB and 120GB drives.

In terms of connectivity, the Mac Book offers one Firewire 400 port, two USB 2.0 ports, built-in Airport Extreme and Bluetooth 2.0+EDR (Enhanced Data Rate), Gigabit Ethernet (for the first time in an Apple consumer laptop), two mini-jacks for combined analogue and digital audio I/O, and a mini-DVI port supporting DVI, VGA S-Video or composite output. One nice thing about the mini-DVI port is that it now supports either mirroring of the built-in display (as before) or extending of the built-in display across an external display.

The low-end Mac Book costs £749, which is really not a bad price, while the mid-range model is priced at £899 and the high-end black Mac Book is yours for £1029. All models are shipping as I write.