Although the cases and, in particular the operating systems, of a PC and Mac still have a somewhat different look and feel, after so many years of fundamental internal differences it still feels slightly bizarre that nowadays you could find almost exactly the same set of hardware components inside. Nevertheless, for the musician there are still a few fundamental differences between the two platforms to bear in mind, which can prove both a blessing and a curse.

The PC musician still benefits from the intense competition between many PC and component builders that drives hardware prices down, compared with Macs of an almost identical specification. However, the resulting huge number of PC-component variables can also be a curse, because it's almost impossible to guarantee compatibility with audio hardware/software, unless you buy from a specialist music retailer who checks this out for you. Finding a PC laptop that provides good low-latency audio performance is a particularly tough challenge nowadays, as you can't swap out components that cause audio interruptions, as you can with a desktop machine.

Conversely, the Mac musician benefits from Apple enforcing a largely fixed specification and set of components for each of its computer models, because audio interface manufacturers then find it far easier to make sure that their products are totally compatible. Indeed, a few interface manufacturers, including Apogee, have totally abandoned PC support — partially, I suspect, for this very reason.

Unfortunately, Apple also have a habit of moving the goalposts with the fixed specification of their new Mac models, and — for instance — their recent abandoning of Firewire ports hasn't endeared them to the host of musicians who already have a serious investment in Firewire audio interfaces, and who subsequently have to find another (and non-standard) way to plug them in when they upgrade their computers.

On the plus side, Apple's replacement for the Firewire ports is the new (and potentially wonderful) Thunderbolt technology, which has been enthusiastically welcomed by many computer users because it can transfer a huge amount of audio, video and data in both directions, at high speed, to a chain of external devices. Apogee, MOTU and Universal Audio have all expressed great interest in developing new audio products for it but, sadly, Thunderbolt has yet to arrive on PC, because Apple helped finance its final development and, hence, got first dibs on it.

But what about USB 3, offering 10 times the transfer speed of its USB 2 predecessor? Well here we have the opposite situation: many new PCs now sport USB 3 ports, but Apple have largely ignored it — at least until now — with rumours that they are exploring its integration into future Macs.

Coming soon to a PC near you? The AVnu alliance already includes plenty of heavyweight pro audio companies who are promoting a new format of audio-visual streaming using the once humble Ethernet port.I feel sorry for the poor audio interface manufacturers, whose customers are openly clamouring for new devices in the new USB 3 and Thunderbolt formats, neither of which are currently cross platform. Some manufacturers do seem to be quietly abandoning Firewire as it disappears from the Mac and suffers from increasing compatibility and driver efficiency problems on the PC platform, and moving over to USB.

However, a few manufacturers have already abandoned these format wars in favour of more traditional I/O ports that are more likely to remain on both Mac and PCs for the foreseeable future. Focusrite, for instance, are now championing the humble Ethernet port with their new Rednet interface range, which uses the Dante digital audio networking technology to offer up to 256 simultaneous channels of high-resolution audio (128 in and out channels at up to 96kHz, reducing to 64 in and out at 192kHz), with a claimed round-trip latency of less than 3ms.

Meanwhile, Avid and a host of other professional audio companies, including Presonus, the TC Group and Yamaha, are promoting a competing Ethernet networking standard named Audio Video Bridging (AVB), using the same Ethernet port and with a claimed latency of significantly less than a millisecond. Find out more from the AVnu Alliance (www.avnu.org).

So where does this leave the PC musician about to choose a new interface? Well, it's always wise to wait until the dust has settled when new formats emerge, to make sure that products have been put through their paces and teething problems eradicated. At this point, it's almost impossible to say which, if any, audio interface format will be the clear winner. 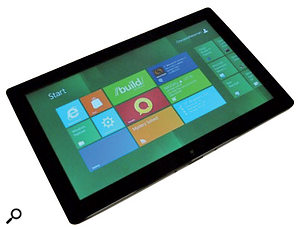 Five thousand of these Samsung Tablets running Windows 8 were given away to software developers at Microsoft's recent BUILD conference in California.

Windows 8 gets the boot: It looks as though we can expect significantly faster boot-up times from Microsoft's forthcoming Windows 8 operating system, even compared with the improvements found on Windows 7. Using a new hybrid shutdown and boot process that combines a normal cold boot with a modified 'resume from hibernate' mode, only the operating-system kernel processes get hibernated, but not applications or user data. The resulting hibernation data is therefore much smaller, and Microsoft claim boot times will be 30 to 70 percent faster than with Windows 7. Those with Windows 8 installed on Solid State Drives can apparently expect their PCs to boot up in around eight seconds — just the ticket when inspiration strikes!

First Windows 8 Tablet: Meanwhile, the huge mobile-phone manufacturers Samsung Electronics have collaborated with Microsoft on a new tablet computer running Windows 8, which was unveiled at the Microsoft BUILD developers' conference in California in September 2011. Prior to this, Samsung relied heavily on Google's Android operating system, so let's hope that this heralds wide acceptance of Windows 8 for future tablets: we need some stiffer mainstream competition for the ubiquitous iPad, and plenty of new music PC-based apps!