We take a look at how MOTU's new MachFive 2 sampler integrates with Digital Performer 5, explore a DP plug-in that makes it easier to work with MIDI controllers, and round up the customary batch of news and tips for DP users. 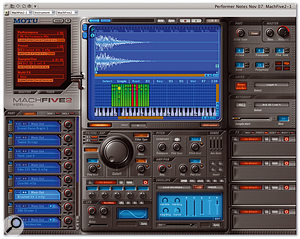 MachFive 2 boasts a flexible specification and is designed to work smoothly in DP5.In last month's Digital Performer workshop article I previewed MOTU's MachFive 2, which was announced in July after a very long gestation period (it was first demo'd at the 2005 NAMM show). In the meantime, I've got my hands on a copy, so here's a first look at how MachFive 2 integrates with DP5. This will prove useful, hopefully, for both new and prospective users looking to get to grips with this very deep and capable sampler.

Regardless of whether you've bought MachFive 2 as a retail package or as an upgrade from version 1, you'll discover that it's supplied on a CD containing the stand-alone application and plug-in installer, together with four DVDs of sound library files. You also get a printed manual that covers all plug-in formats and both Mac and PC platforms.

If you've bought the full retail version you'll get an iLok dongle with a MachFive 2 licence pre-installed; you just need to find a USB port for it. However, if you've bought an upgrade you don't get another iLok but instead a licence card. This contains a snap-out chip which you insert into your existing iLok and from which the authorisation is transferred the first time you boot MachFive 2. This isn't a process I'm familiar with, but it's very well covered in the manual and shouldn't cause difficulty.

Installation itself is straightforward. MOTU suggest you copy the sound library files over first. Unlike the original MachFive, they can go anywhere on any drive available to your Mac, and as they amount to over 30GB of data that's probably a good thing! The installation of the application and plug-in files is then completely straightforward: you just run the installer, and there's not even a 'Custom Install' option. After letting it do its thing, you should be good to go.

A few users have reported MachFive 2 installations that fail to run as stand-alone applications or to instantiate in DP. In these cases it seems to be the iLok copy protection that id causing the problem, and it can be fixed by installing the latest Mac Interlok extensions (which can be found at www.paceap.com/dldrvr.html) and then restarting your Mac.

If you've never owned or used the original MachFive (v1, which was Power PC-only) you can skip this bit, which covers how the old and new versions co-exist and the compatibility between them.

MachFive v1 and v2 can co-exist both as plug-ins and stand-alone applications, as the MachFive 2 installer doesn't touch MachFive 1 files or sound libraries. This is a good thing, as it means that existing DP projects that use MachFive 1 will continue to load up MachFive 1 when they're opened, and you won't get any nasty surprises. If you want to supplement these projects with MachFive 2 sounds, the old and new versions can run happily together. For maximum compatibility it's advisable to leave your installation of MachFive 1 (and its sound library) in place even if you don't plan to use it again.

It's very probable that you'll want to start replacing MachFive 1 instances with MachFive 2s for current and future projects. (This is very important if you envisage a move from a Power PC to an Intel Mac anytime soon.) You can't make MachFive 2 automatically replace an instance of MachFive 1, but because it's backwards-compatible with MachFive 1's sample and file formats, you can make it replace the old version by manually transferring a Performance between the two. The basic process is this:

2. In each instance save its Performance (the 'snapshot' of its sounds and settings).

4. Reassign your MIDI tracks to play the instances of MachFive 2.

5. After confirming that everything plays OK, delete the MachFive 1 instances.

Last month I wrote about how useful Iced Audio's AudioFinder application could be for organising big multi-format plug-in collections. But it can also do much more for DP (and MachFive) users, giving you a set of tools for working with audio and MIDI that you might not have realised you needed! Here are two I find indispensable:

You add a MachFive 2 to a DP sequence just like any other virtual instrument, calling it up on an Instrument Track's uppermost insert slot. But because you'll often end up driving its unlimited multitimbral Parts with lots of MIDI tracks, you might like to use DP's natty 'Add Instruments' feature (shift-option-Apple-I, or Project menu / Add Track / Instrument Track / Add Instruments). This can create a MachFive 2 instance, then automatically add any number of ready-configured MIDI tracks, before putting the whole lot inside a new Track Folder. 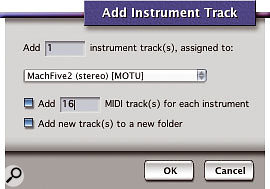 The Add Instruments command simultaneously instantiates a virtual instrument on a new Instrument track and creates any number of correctly assigned MIDI tracks , which is potentially a huge time saver.With a MachFive 2 in place you'll notice that DP MIDI tracks have a lot of possible outputs: 16 banks (A-P), each with 16 channels. Yes, that means you can drive one MachFive 2 on up to 256 MIDI channels! A fresh MachFive 2 has a default 12 Parts assigned to bank 'A', channels 1-12, so it makes sense to use these first. But bank 'P' is there for when you need it, or when we have 10GHz Macs whichever comes first...

What's nice about running MachFive 2 in DP is that you have the ultimate in flexibility regarding how you assign MIDI tracks to MachFive parts. A single track can drive multiple parts (which are set to the same MIDI channel) for big, complex layered sounds. Or several tracks can drive a single part.

As you'd expect, the MachFive 2/DP5 combo also boasts a full drag-and-drop implementation. Drag a mono, stereo or surround soundbite from DP into MachFive 2 and it becomes a loop or phrase (if you drop it on to a Part) or a keygroup (if you drop it on to the keygroup editor). If you drag multiple soundbites from the Soundbites window and drop them on to the keygroup editor, MachFive 2 gives you the option of automatically mapping them in a variety of useful ways. And if you work with MachFive 2's Loop Lab features you can then drag audio loops or loop-slice MIDI triggers back into DP tracks. (Ethno and Phatmatik Pro users will already be used to this kind of thing.) 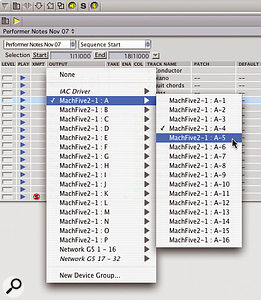 A single MachFive 2 can be driven by 256 MIDI channels, so DP's MIDI output pop-ups grow accordingly...

One of the handiest new MachFive 2 features is its built in mixer. This makes single-instance or stand-alone use really easy and intuitive if you're happy to use MachFive's built-in effects, which are wide-ranging and pretty nice. However. if you'd like to treat a part with some of your favourite MAS or AU plug-ins, you can route its output to DP's mixing environment. In MachFive 2's part list or mixer, change a part's output from 'Main Out' to a pair of DP's busses. Then, in DP's Mixing Board, create an Aux track (or an Input Monitor-enabled Audio track) with the same bus pair as its input. This track will now handle the audio from your MachFive 2 part and can be treated or routed as you like.

If you own Ethno, Symphonic Instrument or a Plugsound library such as PlugSound Pro, you'll be pleased to learn that these are in a 'native' MachFive 2 format — so no format conversion is required. MachFive 2's sample editing and synthesis features are far more extensive than any of these sample libraries' dedicated players, so if there's a preset you've been longing to tweak, MachFive 2 will allow you to do it. You won't be able to save any changes you make to the libraries themselves, but you can certainly 'Save As' to an alternative location if it's a sound you'll want to use again.

Many current soft synths can respond to MIDI controller data, allowing you to tweak filter cutoff and resonance settings (for example) by moving knobs or sliders on a master keyboard or control surface. Exactly which controller message is mapped to which parameter is governed by the synth itself, and normally listed somewhere at the back of its user manual. Some synths, such as MOTU's MX4, can 'learn' new mappings and are completely user-configurable, but others are preset. For example, on GMedia's ImpOSCar the filter frequency parameter responds to MIDI Controller #74 and there's no way this (or any other parameter's MIDI response) can be changed. This isn't a problem if your master keyboard or control surface is itself festooned with programmable knobs, but what if you only have a simple master keyboard with just pitch-bend and modulation wheels? Is there any way these could be pressed into service to control synth parameters? 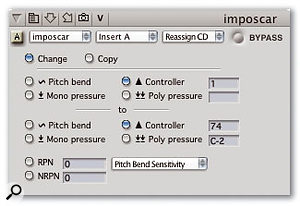 Well, thanks to a DP MIDI plug-in called Reassign Continuous Data, the answer is yes. It can 'translate' any incoming MIDI message into any other, so you could use your modulation wheel (which generates MIDI Controller #1 data) to tweak ImpOSCar's filter frequency (Controller #74). To set this up (assuming you already had an ImpOSCar and a record-enabled MIDI track in your sequence), you'd go to the Mixing Board and on your MIDI track call up the Reassign Continuous Data plug-in from one of its insert slots. Then you would tell the plug-in what kind of MIDI data you were going to send it (Controller #1) and what data type you wanted it to translate to (Controller #74). You'd also choose whether it was a simple 'Change' of data type or a 'Copy', which in this case would preserve the original Controller #1 data and add a new Controller #74 data stream on top. See the screenshot above for how the plug-in settings would look.

If you were so inclined, you could go on and instantiate another Reassign Continuous Data plug-in on the same MIDI track, and configure it so that your pitch-bend wheel generated Controller #71 data, which controls ImpOSCar's filter resonance. The two plug-ins then work simultaneously. After tweaking and perhaps recording a MIDI part like this, just bypass or remove the MIDI plug-ins to regain normal pitch and mod wheel operation.

A New Home For Rax

In March and April 2007's Performer Notes I recommended Plasq.com's virtual instrument host Rax and network audio plug-in Wormhole as solutions for a kind of 'distributed processing' scheme for DP — and even before the April edition of SOS was published, Plasq discontinued both products!

The future for Wormhole is still uncertain, but I'm pleased to report that Rax is now a going concern once more, having been adopted by Audiofile Engineering. This is a US company that already has a stable of elegant OS X audio-related applications, and they seem committed to taking Rax forward. Existing Rax owners will not have to re-purchase the application, though they will have to request a new Licence Key from www.audiofile-engineering.com. Full details of how to do this are on the web site. By the time you read this, Rax 2.1 should be available as a free update to registered owners. It has a new MIDI system in place and an integrated 'Help Desk' feature that allows you to access tech support directly from the application. Version 3 is already on the cards too, apparently adding VST support and multiple outputs.