Apple renewed their commitment to music this month, both for those who listen to it and those who create it. We examine the latest developments, and take a more detailed look at the new iMac, which could offer enough power to be considered more than just an entry-level machine.

If there's one Apple announcement that's got every musician talking this month, it's the release of Logic Studio. In the same way Apple bundled their professional video applications in 2005 to create Final Cut Studio, they've now done the same with their music and audio software. Logic Studio includes the much anticipated version 8 of Logic Pro (find a full review elsewhere in this issue), and Apple have also bundled Soundtrack Pro 2, the audio application previously included in Final Cut Studio, along with a new app called Main Stage, which provides an easy way for stage musicians to access Logic's instruments and effects.

As a bundle, Logic Studio is perhaps a little less coherent than Final Cut Studio, where each application has a clearly defined role within the video production workflow (editing, animated graphics, colour correction, DVD creation, and so on). By contrast, a musician will probably purchase Logic Studio for Logic Pro, and the inclusion of Soundtrack Pro 2 and Main Stage seem more like added bonuses than applications that will support every musician's workflow. Not that there's necessarily anything wrong with added bonuses, though, because the main reason Apple have got every musician talking about Logic Studio this month is arguably the price. Logic Studio retails for just £319. 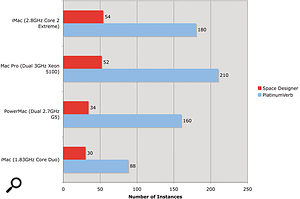 Here you can see how the new iMac performs against other Macs in terms of reverb plug-in instances. It's interesting to note that the iMac is now faster than the most powerful PowerMac with dual processing cores ever released, and also that the iMac even beats out a Mac Pro in terms of Space Designer performance in Logic 7.2.3. This would be a bit surprising, except for the fact that Logic 7's audio engine doesn't fully take advantage of all available cores.Apple caused quite a stir when they originally created the $999 Logic Pro package from Emagic's product line, integrating Logic Audio Platinum 6 with all of Emagic's instrument plug-ins that previously had to be purchased separately. But now Apple are adding even more functionality for half the cost of Logic Pro 7, and doing away with the hardware dongle that has protected Logic since the very first release in 1992 (the current XSKey dongle was introduced with Logic 5). One could argue that the price of Logic is now so low that most people would rather buy a copy than steal it, but I suspect there will still be a large number of people who will use Logic and not own a legitimate license.

The pricing and lack of copy protection will both achieve the same result for Apple, though: widespread use of their music-creation software amongst Mac users. And since every Logic user has to buy a Mac, Apple can arguably afford to use software as another way of driving hardware sales, rather than seeing any inherent value in the software itself. As with Logic Pro 7's pricing, this is potentially dangerous for the music and audio software market, because most companies who develop music software can't compete and subsidise the cost in this way. That a full retail copy of Ableton's Live now costs more than a full retail copy of Logic Pro is a curious situation that few could have predicted — and that's not taking into account Ableton's Sampler and Operator instruments that have to be purchased additionally.

But aside from the issue of software companies who generate all their revenues from selling software being unable to compete with Apple's aggressive pricing, such a move also affects users' expectations of the entire market. For example, Digidesign's Music Toolkit adds additional features (including the ability to use up to 48 audio tracks) and plug-ins (such as the Hybrid synthesizer and TL Space convolution reverb) to Pro Tools LE for the same price as the complete Logic Studio bundle. And with Apogee now offering the very competitively priced high-quality Duet audio interface, that integrates nicely with Logic Pro, for $495 in the US, it's obviously possible to turn any Mac into a very impressive studio for less than $1000.

I remember making some similar points in Apple Notes after the release of Logic Pro 7, and although this release led to companies such as MOTU, Digidesign and Steinberg bundling more instruments and effects with their products, it didn't significantly affect pricing or users' expectations. However, with Logic Studio Apple have really thrown down the gauntlet, and it will be interesting to see if it's one that other companies are prepared to take up.

The famous American designer Paul Rand once said that "design can be art," and, not to be overly complimentary, I was reminded of the sentiment when unpacking a brand-new iMac this month. Although I'd already gazed upon the aluminium and glass stylings of the new iMac at an Apple press briefing and in Apple Stores (I wrote about my initial reaction in last month's Apple Notes), unpacking a new 24-inch iMac and putting it on my desk confirmed my initial reaction that this is perhaps one of the most stunning desktop computers ever designed. However, with Apple now aiming the iMac at both consumer and professional markets, it's important that it have both brains and beauty.

I got a chance to put the high-end model, which features a Core 2 Extreme processor running at 2.8GHz, through its paces, so I decided to run the usual reverb and instrument performance tests. Although these tests aren't perfect, they do at least give a good indication of relative performance between Macs that we've tested over the last few years, and since those tests were performed prior to the release of Logic Pro 8, I used Logic Pro 7.2.3 instead. 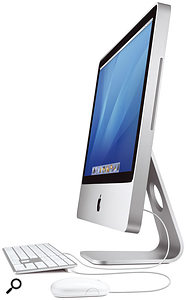 In addition to pure performance, another significant feature aimed at the professional market is the FireWire 800 port, which proved useful for a somewhat unexpected reason. The iMac I was playing with came with a 500GB hard drive, and I decided to run some tests to see how this drive would perform for recording and playing back audio tracks. However, when I connected my Fireface 800 interface to the iMac's 400 port, I noticed a curious thing: the minute Logic tried to initialise the interface via Core Audio, the Fireface's Host indicator LED turned red (indicating that it had lost its connection), and the Fireface Settings application displayed a message to say I had the wrong firmware (even though the application previously indicated that there was no problem).

It turns out that the new iMac's FireWire 400 implementation causes problems with certain devices, such as the Fireface 800, while some devices, such as Apogee's Ensemble, perform completely normally. At the time of writing I had yet to find an official solution, but there are a few workarounds. In the case of the Fireface, connecting via the iMac's 800 port instead worked just fine, but if your incompatible device doesn't have an 800 port, try connecting it via a Firewire hub instead, and if you don't have a hub, try daisy-chaining the device from another device that is compatible. With the Fireface, for example, I could get it to work via the 400 port if I daisy-chained it from a Firewire hard drive that was connected to the 400 port on the iMac.

So after all this, when I finally did get the Fireface to work with the new iMac I found I could play 143 mono, 24-bit, 44.1kHz audio tracks simultaneously, which isn't bad. And if you're looking at the new iMac with a view to using the internal drive for audio or video, it's worth remembering that you can order it with a 750GB or a 1TB drive as a build-to-order option.

For the past two years, Apple have chosen September as the month to revamp their iPod product line, introducing new models such as the iPod Nano in 2005 in time to take advantage of the approaching holiday seasons. This September was no different, and Apple held a special 'The Beat Goes On' press event to unveil their new iPods and music-related services for the iPhone. 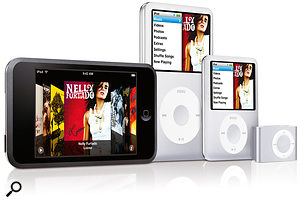 The new iPod family now features a brand-new model, the iPod Touch, which is basically a phone-less iPhone. The iPod Shuffle is still the baby of the family and, other than the introduction of new colours, remains unchanged: 1GB of storage for £49. The first of the new iPods introduced was a third-generation iPod Nano, which has become shorter and wider (some users now refer to this model as the iPod Fatty...) to accommodate a 2-inch, 320 x 240 screen capable of playing back video. You might notice that the screen is the same resolution as the slightly larger 2.5-inch display employed on the regular iPod, so you don't lose any pixels when watching videos, although the density is finer, at 204dpi (dots per inch) versus 163dpi on the normal iPod.

The new Nano also incorporates an updated user interface with a split-screen display that gives better visual representation of menu items, and Apple have added a special Cover Flow mode that works with the click wheel. The iPod Nano is now available in two models: there's a 4GB grey version for £99 and an 8GB model that's available in a choice of five colours for £129.

The regular iPod has been rechristened the iPod Classic and remains the model of choice if you want to carry a large amount of music and video with you. The user interface has been updated with the same enhancements as featured on the Nano, but other than the fact that it's slightly thinner, with a few cosmetic tweaks, the iPod Classic hasn't changed much — except for one thing. Apple now offer a 160GB model with 40 hours of audio playback (or seven hours of video) for £229, which is apparently enough storage for a staggering 40,000 songs! An 80GB model is also available for £159, offering 30 hours of audio (or five hours of video playback).

Last, but not least, Apple also introduced a much-rumoured touchscreen-based iPod. The iPod Touch is basically an iPhone without the phone part, providing almost the same features, including built-in wireless networking and the Safari browser. One of the coolest applications on the iPod Touch is a new wireless version of the iTunes Music Store, which lets you browse and purchase music directly on your iPod and have it sync back to your main computer when you plug your iPod in again. The iPod Touch should be available by the time you read this, with either 8GB of storage for £199 or 16GB for £269. Hopefully we'll be able to take a closer look at this new model in next month's issue.