Get up and running with MOTU's MachFive 3, an ideal software sampler partner for Digital Performer.

MachFive 3 is MOTU's latest virtual instrument: a full-blown software sampler with capabilities to rival industry standards like Native Instruments' Kontakt. As with all MOTU's commercial virtual instruments (that's to say the ones that aren't bundled with DP), it's developed in collaboration with French company Univers Sons, incorporates some of their UVI Soundsource libraries, and has a strong family resemblance to their UVI Workstation sample player software. Even though MachFive 3 is a genuinely cross-platform product, with Mac OS and WIndows versions, it's still an ideal match for Digital Performer running on the Mac, so this month I'm looking at how DP users can get up to speed with this great new virtual instrument. 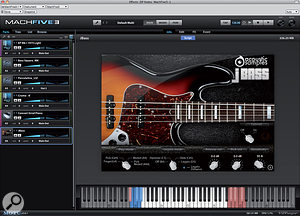 Here's a turn-up for the books: MachFive 3 doesn't have a MAS version, only Audio Units, RTAS and VST. But since DP's Audio Unit plug-in format hosting is so good, it's really of no consequence. The AU version will show up in your instrument plug-in lists along with your other AU plug-ins.

Usefully, too, MachFive 3 won't overwrite a previous MachFive 2 installation, but just co-exists with it. Then, if you open a DP project that used MachFive 2, it'll still use MachFive 2 — and that's great for consistency and stability. MachFive 2 and 3 will actually run simultaneously without any trouble. Oh, and if you're wondering about how the new version gets along with MachFive 1, that's actually a moot point. Version 1 only runs on PowerPC-based Macs, and version 3 only on Intel Macs, so never the twain shall meet…

As far as backwards compatibility goes, MachFive 3 will open version 1 and 2 presets and multis with no problem, and will open their bundled sound libraries too. So if you've got a DP project that uses an instance of MachFive 2, for example, and you want to 'upgrade' it to use your new MachFive 3, do the following:

1. In MachFive 2, click the 'SAVE P[erformance]' button in the display at top left of the plug-in window, and save the file somewhere convenient, perhaps on your desktop, or in the DP project folder.

2. Now instantiate MachFive 3, and click on the button with the spanner icon near the top of the plug-in window. Choose Load Multi (notice the different terminology – it's not 'Performance' any more) and use the browser to locate the MachFive 2 performance you just saved. Double-click it, or select it and click the OK button.

3. Now you'll have to work through all the MIDI tracks that were assigned to parts/channels in MachFive 2 and reassign them to the same ones in MachFive 3.

You should now be up and running. The only thing I'm conveniently overlooking is any automation of MachFive 2 parameters. That'll be coming from the MIDI tracks driving individual parts, in the form of MIDI continuous controller messages, and ought to map pretty well to the new MachFive instance. In the case of some very specific automation mapping, you may need to set this up again in MachFive 3. Once you've located the parameter, right-click it for a contextual menu from which you can assign it a specific MIDI continuous controller type (see screen showing MIDI CCs). Don't worry that you're suddenly configuring 'modulation' — that's what MachFive 3 calls any control of its parameters, whether from its onboard modulators or an external MIDI message. 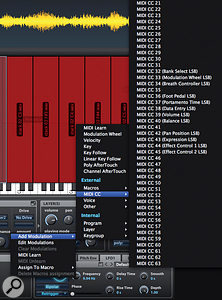 Right-clicking on most knobs or sliders in MachFive 3 brings up a staggering array of modulation options, including MIDI CC messages from your controller keyboard or DP track.

First, you'll notice the top-level item called 'Places' in MachFive 3's browser. By default, in my OS 10.6 installation at least, the locations included there are Desktop, Documents, Home folder and Music, none of which are where I store my sample libraries. So try this: open up the Devices item (by double-clicking or clicking its disclosure triangle), then drill down into your disks to locate a folder that contains your sample-library files. Then click and drag the name of the folder back onto the leftmost browser column. The column goes white to confirm your action, and if you drop the item there it's permanently added into the Places list. Handy for next time! To zap those not-very-useful default Places while you're at it, right-click them one at a time. There's only one contextual menu command — Remove from Favourite Places — so if you choose it, the Place disappears.

Second, there's an even more convenient way to access the bundled MachFive 3 library, and other sample libraries by MOTU or Univers Sons: via the Soundbanks item. You might notice Soundbank names appearing there if you mount them manually (browse your way to them and then double-click them to 'mount' them). All very well, but these Soundbank shortcuts are not remembered by MachFive 3 next time you load it, so to get all your MOTU/UVI libraries easily accessible, do this:

1. Make sure the browser overlay is closed and you're viewing MachFive 3's main window. Then click the spanner icon at centre top. Choose Preferences.

2. In the Preferences window, open the Soundbanks tab by clicking its icon. 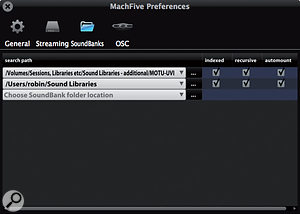 4. Navigate to the location of your sound libraries, select the folder, then click Open.

5. In the Preferences window, tick Indexed, Recursive and Automount. Respectively, these make MachFive add the programs within Soundbanks to its browser Search function, look in any folders inside the folder you just configured, and automatically add Soundbanks to the browser list.

6. Repeat steps 3 to 5 to add more locations if needed. Close the Preferences window.

Now, when you bring up MachFive 3's browser (by double-clicking the word 'Empty' in the part list, for example), all your Soundbanks will be immediately under the Soundbanks item.That holds true for all future uses of MachFive too.

MachFive 3 runs as a 64-bit stand-alone application and plug-in if your OS and sequencer host support it. That said, with DP still very much a 32-bit application at the time of writing, DP users can't yet take advantage of the memory-related advantages that a 64-bit plug-in architecture brings.

However, there is one thing that a few users will want to watch out for, and that's compatibility problems with the MOTU sound libraries Symphonic Instrument (often called MSI) and Ethno version 1. In short, MachFive 3 running as a stand-alone application refuses to open them. That's because it opens in 64-bit mode, even if you think your Mac and OS are only 32-bit. There is a fix. Find the MachFive 3 application in your [Hard Disk]/Applications folder, select it, hit Command-I to 'Get Info', and tick the 'Open in 32-bit mode' tick box. However, the fix is at the expense of that nice 64-bit memory addressing, which could hit some power users. And it's not really clear whether the incompatibility persists when MachFive 3 is used as a 64-bit plug-in in a 64-bit host application. For their part, MOTU say they're aware of the issue and are working on a solution. If and when we see a new 64-bit version of DP, I'll revisit this thorny little issue.

MachFive 3 has a great on-board mixer for all its internal parts, but there are times when you might prefer to bring some or all parts individually into Digital Performer's Mixing Board, to treat them with your favourite MAS or Audio Unit plug-ins. Here's how you do it, working with a conventional stereo MachFive 3 instance:

1. In the MachFive 3 plug-in window, make sure you're viewing the parts listing (the 'Parts' tab should be selected at the top left of the plug-in window). You'll notice that, by default, all parts are set to use Main Out (visible under the volume slider), which means that they output through the Instrument track MachFive 3 is instantiated on.

2. To remove a part from that main output and pipe it directly into DP's Mixing Board, click the output pop-up menu — directly on 'Main Out' works well — and choose one of the other 16 stereo bundles.

3. In DP, create an Aux Track from the Project menu. Then in the Mixing Board or Tracks Window, for example, click on an audio input pop-up menu and choose the corresponding MachFive bundle.

The naming scheme between MachFive 3 and DP won't be quite the same. For example, the stereo out pair that a single MachFive calls 'Out 2' is called 'MachFive3-1 3-4' in DP. But if you remember MachFive has 16 stereo out pairs as well as its Main out, you can tally them up with the 16 DP MachFive inputs.