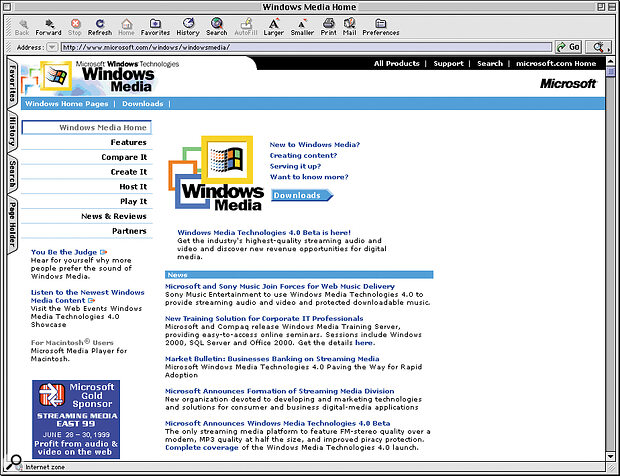 Downloadable music is on the move in more ways than one, with new developments in portable players and online delivery streaming onto the scene. But what do all these changes mean for musicians? Simon Trask assesses the situation.

Online music delivery is one of the most dynamic areas of Internet‑centred development at the moment, and there have been many developments since I last wrote on the subject in February's SOS. It seems to me that a worthwhile strategy when trying to get to grips with rapid change is to reflect on the underlying issues and try to find a centre from which to orient yourself. Hence, rather than just provide a flurry of news, I'd like to suggest several online ports of call for some more reflective, as opposed to reflexive, reading. A good starting point, touching as it does on issues of power and control, is a story in the Internet Standard concerning alleged moves by Sony Music to slip in a contract clause giving the company control over an artist's web site (see www.thestandard.com/articles/art...). The story suggests that this might be part of a wider strategic move by the company to exert greater control over their artists' earning potential.

A very germane article at the moment is the 'Digital Audio and Free Expression Policy Statement' (www.eff.org/cafe/EFF_audio_state...) published online recently by the Electronic Frontier Foundation, a leading electronic civil rights body. Written in response to current developments, particularly within the Secure Digital Music Initiative, the statement in essence supports the notion that "competing technologies, both open and closed, are the strongest way to protect free expression in the distribution of digital audio." The EFF has also established the Consortium for Audiovisual Free Expression (CAFE — see www.eff.org/cafe/) to pursue the aims outlined in the policy statement. A report on the first meeting of the Consortium can be found at www.zdnet.com/zdnn/stories/news/.... On the subject of the SDMI, David Emmanuel Weekly has an article called 'Why SDMI Will Fail' up at david.weekly.org/writings/sdmi.shtml" target="_blank

A draft paper by Pamela Samuelson entitled 'Copright and Censorship: Past as Prologue?' (www.egroups.com/group/rre/1066.html or commons.somewhere.com/rre/1999/RRE.Copyright.and.Censor.html) provides a long and detailed historical exploration of the relationship between copyright, free expression and censorship. While it doesn't make for the easiest of reads, and isn't specifically about the music industry, it is a worthwhile read if you want to grasp the deeper issues behind the current rhetoric that surrounds piracy.

Another interesting article is 'Tracks of Freedom' by Jimmy Guterman, which appears in Salon magazine (a 'printer‑friendly' version of the article can be found at www.salonmagazine.com/tech/featu...). In essence, the article considers music from the perspective of the open source movement, and within a context of people being increasingly used to customising their technological environments, arguing that multitrack masters are the musical equivalent of source code and should be 'opened up' to music buyers so that they can create their own personal mixes.

So what of recent developments? The record industry‑backed SDMI (Secure Digital Music Initiative) continues to work on its framework for secure downloadable music. MP3.com (www.mp3.com/news/249.html) and Wired News (www.wired.com/news/news/technolo...) have both carried reports based on anonymous insider information from the SDMI's London meeting, held early in May, claiming that the industry body has a two‑stage plan to eliminate non‑SDMI‑compliant downloadable music formats. In response, SDMI Executive Director Leonardo Chiariglione and Jack Lacy, Chairman of the SDMI's Portable Device Working Group, have issued a joint statement clarifying their position and asserting that open formats such as MP3 will continue to be supported (see the SDMI Update at www.sdmi.org/dscgi/ds.py/View/Co...‑50). 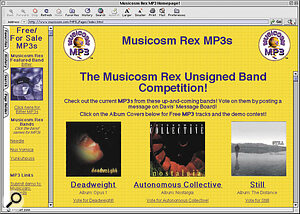 Despite the SDMI's professed tolerance of open formats, MP3 continues to mark a fault line between the record and technology industries. Perhaps the most significant development of the past few months has been the rapid growth of the portable MP3 player industry, with players springing up all over the place from companies large and small. The latest offering from Korean company Saehan, which pioneered the portable MP3 player genre along with Diamond Multimedia, is the MPMan Recordable (see www.mpman.com/eng/), which bypasses the computer by featuring built‑in MP3 encoding. German company Pontis, which has introduced the MPlayer 3, is about the only company to provide Mac as well as Windows versions of the software for organising and transferring MP3 files to the player. Diamond Multimedia (www.diamondmm.com or www.rioport.com) has furthered its trailblazing Rio range with the Rio SE, a Special Edition model with 64Mb of built‑in memory, which also comes with MusicMatch's PC jukebox software for CD‑to‑MP3 conversion and transfer.

Samsung has brought out the yepp range of portable MP3 players (www.yepp.co.kr). Perhaps the most significant entrant is Creative Labs, the PC soundcard company, which has introduced the Nomad 32 and Nomad 64 portable MP3 players (www.nomadworld.com); the numbers refer to the amount of memory in Mb that each has. Japanese company Dynamic Naked Audio (www.dynamicnakeaudio.com), who deserve an award for most imaginative company name, have come up with the cheapest player yet, in the form of the Pocket Digital Audio player at around £35, but it comes without any built‑in memory and requires a separate unit to write to the plug‑in flash cards that it uses for storage.

Meanwhile, US company Sensory Science (www.sensoryscience.com) is bringing out a player with the most memory yet. The $299 raveMP3 features 64Mb of built‑in memory, plus a slot for a 16 or 32Mb card giving up to 96Mb of storage. When you take into account the 11:1 compression ratio for 128kbps stereo MP3, that's in effect more storage space than on a CD (though with a 16Mb card costing $49.95 SRP and a 32Mb card $89.95, it comes at a significant cost).

Flash memory cards are the storage format of choice for the new generation of portable music players, as well as being used in an increasingly wide array of computing and consumer devices such as smartphones, personal organisers, cameras, hand‑held computers, and even toys. In fact, the raveMP3 is also notable for being a personal organiser as well as an MP3 player. And here we come to an important new trend: the convergence of portable music players with other portable computing devices. Casio's new Cassiopeia E105 (www.casio.com/hpc), for instance, is a Windows CE‑based palm‑size PC, complete with a 240x320‑pixel colour LCD display and 32Mb memory, which can play music in MS (Microsoft) Audio format. An accompanying CD includes software which can convert both MP3 and CD‑DA tracks to MS Audio format for playback on the Cassiopeia.

Another significant development which has taken place since February's Net Notes is the launch in April by Microsoft of Windows Media Technologies 4.0 beta (www.microsoft.com/windows/window...), its new generation of secure audio and video technologies. One of the features claimed for the new proprietary audio compression technology is that it can deliver files half the size of equivalent‑quality MP3 files. Many companies have announced support for Windows Media audio (MS Audio), including leading PC MP3 player companies Winamp, Sonique and MusicMatch, who are integrating Windows Media support alongside MP3. Microsoft has also introduced "FM‑quality" streaming audio over dial‑up modems, with integrated PowerPoint presentation capability; the Windows Radio Toolbar feature in Internet Explorer 5.0 gives the company powerful leverage for its technology.

In the non‑Microsoft corner, the currently undisputed champions of streaming media, RealNetworks (www.real.com), have also announced some important developments. With their new RealSystem MP open digital audio architecture and associated RealJukebox software, and their buy‑up of veteran MPEG software company Xing Technologies (whose AudioCatalyst will be the subject of a forthcoming SOS review), the company is expanding into the downloadable music arena and aligning itself with MP3.

Meanwhile, GoodNoise Records, who have just renamed themselves emusic.com (https://web.archive.org/web/2015..." target="_blank) and who have championed MP3 within a secure downloadable music context, have been going from strength to strength. Among their own signings, the most high‑profile are Frank Black and They Might Be Giants. However, backed by $31 million of equity financing, the company has also acquired existing online music catalogues by buying up emusic.com and Nordic Entertainment, and signed distribution agreements with a slew of independent record labels. In a sign of the times, it also recently bought the grandaddy of online music sites, IUMA (Internet Underground Music Archive).

That stalwart of the downloadable music scene, Liquid Audio (www.liquidaudio.com), continues to attract independent record labels to its technology. Format‑wise, Liquid Audio not only now supports MPEG‑2 AAC as well as Dolby Digital, but the company has also announced that it will introduce support for MP3.

The AT&T‑backed a2b Music continues to be a presence in online music with its MPEG‑2 ACC‑based technology. Lucent Technologies (www.lucent.com) is also worth keeping an eye on. The company, a founding member of the SDMI, has its own online perceptual audio coding‑based delivery technology (PAC and now EPAC), which has recently attracted endorsement from leading producer Phil Ramone, who has become Senior Advisor to the company's Internet Music Download Initiative. Lucent has also announced that it will be introducing an EPAC portable music player in December of this year.

The signs are that there is no united front among the major record companies when it comes to delivery technologies (other than a dislike of MP3). Sony Music Entertainment, for instance, have announced that they will begin making singles available for digital download and sale in the summer using Microsoft's Windows Media Technologies 4.0 software. Meanwhile, BMG and Universal are teaming up with AT&T and Matsushita to develop a secure digital distribution system. Finally, in breaking news as of writing, EMI have said that they will be unveiling their own digital music distribution plans in a few weeks' time, and have begun digitising their huge back‑catalogue in preparation for online sales before the end of the year.

While MP3.com continues to be the central site for all things MP3, other sites are emerging to challenge its music hosting and sales business. StreamlineMusic.com (www.streamlinemusic.com) is giving 100 percent of sales revenue to the artists it hosts (MP3.com offers a 50/50 split on sales of its DAM‑format 'MP3 CDs'). Another company, www.freeMP3space.com, is getting into the MP3 hosting business by offering 25Mb of web space free for musicians to post their music in MP3 format.

Another interesting commercial MP3 development is MusiCosm Rex (www.musicosm.com/MP3_Pages/index...), an MP3 record label set up by music community web site Musicosm.com. While the label has its own A&R staff, based in Los Angeles, in deciding what bands to sign it also draws on the votes of music fans via the Internet. The label posts free downloadable MP3 demos from interested unsigned bands, tallies up downloads and votes each month, and signs the bands with the most votes and downloads to exclusive recording contracts for promotion and online digital download sales.