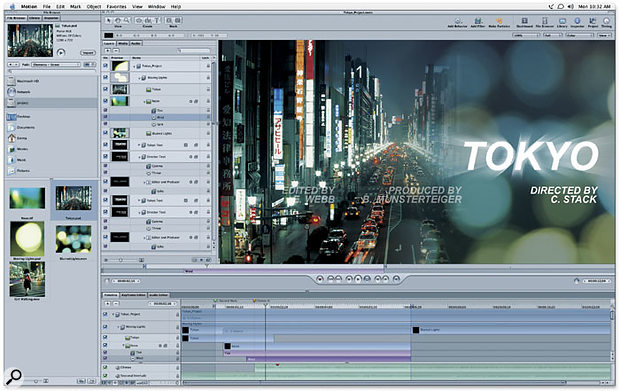 Anyone who wants to add real-time graphics with effects to their Final Cut productions could find that Apple's Motion, announced recently at NAB, is just what they're looking for — and something of a bargain at £199.Photo: Apple

Apple had some interesting announcements to make at this year's US National Association of Broadcasters show, including improvements to the eMac and portable line-up.

As Apple are continuing to focus on the desktop video market, it comes as no surprise that the company had a fairly substantial presence at this year's National Association of Broadcasters (NAB) show in Las Vegas. Following last year's announcements of Final Cut Pro 4, DVD Studio 2 and Shake 3, Apple again revised their professional video software line-up with Final Cut Pro HD, DVD Studio Pro 3, Shake 3.5 and the announcement of two new products: Motion and Xsan.

Final Cut HD is the latest release of Apple's popular video-editing application, which now features support for HD video. While the new HD features look very interesting, it's worth pointing out that phrases such as 'HD over Firewire' are a bit misleading because Firewire doesn't actually have the bandwidth for HD video. For the most part, Apple are talking about the consumer-orientated HD format, DVCPRO HD (or sometimes just HDV), and it's this format that can be transported over Firewire and handled natively (ie. with no extra hardware) by Final Cut Pro. To handle professional HD still requires extra hardware fitted to your Power Mac's PCI buss, such as AJA's Kona (www.aja.com), Pinnacle's Cinewave (www.pinnaclesys.com), or Black Magic Design's DeckLink (www.blackmagic-design.com). Final Cut Pro HD is available now for £699. Users of the first three versions can upgrade for £279, while users of Final Cut Pro 4 can download a free update from the Apple web site.

Motion is a brand-new application in Apple's professional video software line-up, providing an easy way to create real-time graphics for video productions. Whether it's animated text or special effects using particles such as smoke or fire you're hoping to add to your video masterpieces, Motion could be just the job. There's also support for Photoshop layers and After Effects plug-ins, and Motion will, of course, integrate with other Apple professional video products, such as Final Cut Pro and DVD Studio Pro. While Apple are slightly less specific about when Motion will be available, stating only "sometime this summer", the application will be aggressively priced at £199, presumably to compete with the likes of Discreet's Combustion and Adobe's After Effects — even though Motion doesn't support 3D animation.

One of the new features in DVD Studio Pro 3 is the ability to encode audio in the DTS 5.1 format, in addition to the support for Dolby Digital and uncompressed stereo found in previous versions. While DVD Studio Pro won't produce DVD-Audio disks, the application is still useful for users who want to produce a DVD-Video disk containing their surround mixes to share with others. DVD Studio 3 will arrive during May for £349; existing users of the first two versions can upgrade for £139.

I Left My Files In Xsan Francisco

Xsan is also potentially interesting to the audio community — despite Apple's initial focus on the video market — especially in larger studios where there's a need for substantial shared storage between multiple audio workstations. For those unfamiliar with the technology, a SAN (Storage Area Network) can basically be thought of as a large, fast hard drive that's shared by multiple computers.

A SAN differs from a regular LAN (Local Area Network) in two important ways: firstly, the available bandwidth is far greater, since SANs are based on a Fibre Channel infrastructure, which those who work in larger IT departments should be familiar with. This interface supports bandwidths of up to 200MB/s, and you can use multiple Fibre Channel connections to increase the theoretical amount of bandwidth available to each machine on the network. Secondly, a SAN uses protocols that are, in many ways, a development of SCSI, rather than being based on network filing systems and protocols, so attaching storage to your computer logically by way of a SAN is pretty much like having a real drive attached to your system.

For audio and video work, SANs make a lot of sense. In the video world, if you have multiple editors all working on the same video footage, it can be kept in one centralised location, which makes backing up easier, and it's easier to share data between users than it is to carry around Firewire ATA drives. In the audio world, connecting an audio workstation to a SAN is useful if you have people comp-ing sessions in an editing room after finishing recording in the main studio. In short, SANs make it easy to share data without creating unnecessary duplication, which makes for a better workflow where large audio and video files are concerned.

Xsan makes use of an Xserve RAID for storage, which needs to connect to an approved Fibre Channel switch. That, in turn, connects to all the other systems on the SAN. Each of these systems needs to have Fibre Channel connectivity (Mac users can use Apple's own PCI Fibre Channel card), and Xsan supports multiple client platforms in addition to Mac OS X, such as Windows and Linux. Users will need to dedicate one Mac system on their SAN to be the so-called metadata controller, and this Mac needs to be either an Xserve or Xserve G5, a Power Mac G4 (with at least dual-800MHz G4 processors) or a PowerMac G5. It's not a system that's going to appeal to the modest home or project user, but that's not really its purpose. Where Xsan will find its home is medium-to-large audio and video production facilities where there's a big need for centralised storage.

Apple's new Powerbook line-up includes 12- and 15-inch models with 1.33GHz G4 processors, plus high-end 15- and 17-inch models offering 1.5GHz G4 processors. Now that all models retail for less than £2000, the Powerbook is better value than ever for musicians on the move.Photo: AppleIn the absence of faster G5s, the iMac turned out to be the only G4-based product line Apple didn't speed-bump this month, with revised eMacs being first out of the door during the middle of April. The eMac includes a 1.25GHz G4 processor, 256MB DDR333 SDRAM and ATI Radeon 9200 graphics with 32MB video memory, supporting a 17-inch built-in CRT display with a resolution of 1280x960 pixels. Also featured are Firewire 400 and five USB ports (three of which support USB 2.0). A low-end eMac is available for £549 with a 40GB Ultra ATA/100 drive and a combo drive, and for £699 you can get an eMac with an 80GB drive and a Super Drive.

Since these specifications are not too dissimilar to the previous range of Powerbooks, it seemed likely that Apple would upgrade this line as well — it would be a little strange to have a consumer/education-oriented product that was as or more capable than a professional portable, after all! And so it was: the new range of Powerbooks features a broad range of general improvements, including faster G4 processors, Airport Extreme as standard on every model, improved video hardware and larger hard drives.

The £1399 15-inch Powerbook features the same basic specifications as the 12-inch in terms of processor, memory and storage, and a combo drive, but includes an ATI Mobility Radeon 9700 with 64MB video memory for its larger 1280x854 screen, plus a Firewire 800 port, a full-sized DVI connection, an S-Video output and Gigabit Ethernet. The £1749 model adds a 1.5GHz G4 processor with a 512k Level 2 cache, 512MB DDR333 SDRAM, an 80GB Ultra ATA/100 drive, and the now infamous backlit keyboard. And heading up the revamped Powerbook line is the venerable 17-inch model, which features the same specification as the high-end 15-inch model, but with a 1440x900 display instead for £1949.

All models feature a combo drive, with a Super Drive being available as a build-to-order option on the 14-inch iBook. In terms of connectivity, all iBooks are Airport Extreme-ready (with the high-end 14-inch model offering Airport Extreme built in) and feature a headphone port, Firewire 400, two USB 2.0 ports, a 56k modem, 10/100 Ethernet and a video output supporting VGA or S-Video.

Just as I was finishing last month's column, Apple released Mac OS 10.3.3. Probably the biggest news to those reading this article is the improved mLAN support for the latest generation of devices supporting this interface. Of course, a version of Mac OS X that claims to really support mLAN is nothing new, and the new independent mlancentral.com web site claiming that "2004 will be the year mLAN breaks loose" seems much like previous claims Yamaha made for 2003, and 2002. You get the idea. Still, improved mLAN support in OS X is great news if you already own an mLAN-compatible product or are planning on purchasing an 01X. Firmware updates for first-generation mLAN products are available, to bring devices such as PreSonus' now discontinued Firestation, Apogee's AD8000 and Kurzweil's KSP8 up to speed.