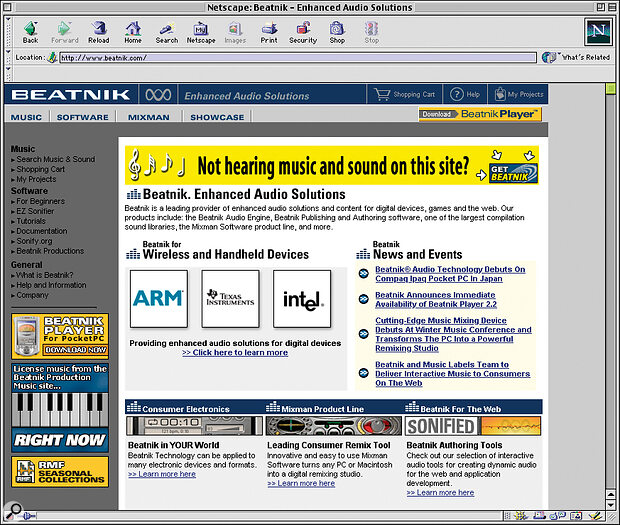 Despite increasing computer performance, Internet connections and multimedia possibilities, most music on the web today is fairly static, if it is present at all. Indeed, as web pages themselves become more visually impressive, dynamic and tailored to our needs, they are still, for the most part, like silent movies. Eighties pop master and music innovator Thomas Dolby Robertson has been interested in the possibilities of interactive music for many years, and this experience has culminated in the creation of Beatnik (www.beatnik.com" target="_blank), a platform for the delivery of interactive music on‑line, and also the name of his company. 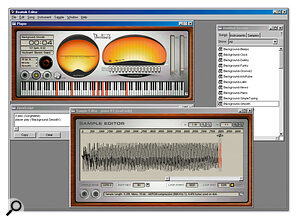 The attractive Beatnik Editor allows users to author their own RMF (Rich Music Format) files, potentially in concert with their favoured sequencer package.

At the very heart of Beatnik is the Beatnik Audio Engine (BAE) a music synthesizer, sample player, effects processor, sample‑rate converter and stereo 64‑voice mixer rolled into one. In addition to playing back linear audio formats such as MP3 and WAV, the engine provides a full software synth for playing back MIDI and RMF files, and you can even include your own samples.

The key advantage for the composer in using the BAE is that it provides a common platform on which to write and deliver music for the Internet. The problem with putting MIDI music onto the web has been that you never know how it will sound on the listener's computer. This uncertainty is eliminated by using Beatnik, because everyone is going to have access to the same sound set, and you can provide any extra samples that are required.

Providing a common set of sounds is very useful, but perhaps the biggest strength of the BAE is its support for Rich Music Format (RMF) files, which are compact in size, play back almost instantly on demand, and can contain three different types of musical information.

Firstly, the RMF file can contain MIDI data, just like the MIDI files we are all familiar with, which is played back using the factory and user sounds available to the BAE. Secondly, the same file can contain linear audio stored in formats such as WAV, AIFF, AU (short for Audio, a standard audio file format for Sun and NeXT workstations) and, perhaps most significantly for Internet distribution, MP3. Lastly, the RMF file can also contain your own sampled instruments, that remain in the BAE while the RMF file containing them is in use.

The convenience of being able to supply this information in one file is obviously very valuable when you're sending it over the Internet, but the key to RMF is what you can do with it during playback (more later). After all, Beatnik is about interactivity, not just another way of playing static music.

If your RMF file is made up of custom instruments for sound effects, narration, or something similar, without any song data (such as a MIDI file), in Beatnikspeak it's referred to as an RMFX file. Despite this naming difference, an RMFX file is treated in exactly the same way as an RMF file and still has the .RMF file extension. For those worried about the security of their work, RMF files are automatically locked with 40‑bit encryption, to protect copyright details and any custom instruments that you may create yourself.

To experience the world of Beatnik, simply download and install the Beatnik Player plug‑in for your browser (visit www.beatnik.com/software/player...." target="_blank). Although there have been various compatibility issues in the past, the latest version (2.2) supports Internet Explorer and Netscape Communicator, on both Windows and Mac platforms. (You can even get a copy of the Beatnik Player for Compaq's iPaq Pocket PC, a must for any musician who is also a hand‑held computer anorak!)

The Beatnik Player plug‑in is accessed by web developers through a JavaScript interface, and anyone already familiar with the JavaScript language should have no problem in getting to grips with the Beatnik Application Programming Interface (API). Full documentation is provided, in addition to tutorial material covering both basic and advanced topics, but if you're not familiar with JavaScript, you can use the 'EZ Sonifier' (www.beatnik.com/software/tutoria..." target="_blank), a simple web‑based wizard that generates code you can cut and paste into your web page.

What Can You Do With It?

The simplest way of adding some interactive sound to your site with Beatnik is to 'sonify' the user interface; specifically, we're talking about links and elements users can click on. They will will hear a sound for rollovers and clicks, which can be a good way of giving your site something of a sonic identity. However, remember to bear in mind the number of times users will hear these sounds when navigating your site — you don't want to irritate them!

There are many possibilities during playback for MIDI data encapsulated within an RMF file; for example, you can alter tempo, or change level and pan positions. It's also possible to mute and unmute tracks, which means that you could select tracks to play randomly each time a page is visited, so that the user hears a slightly different arrangement on different visits.

You can also make use of QuickClips, short audio samples, usually between three and five seconds in length, that are optimised for immediate playback on a web page and are usually triggered by a rollover, or a mouse‑click on an object such as a link or an image. Immediacy is the key reason for using a QuickClip instead of streaming Real Audio, for example, because the audio starts to play as soon as the user wants it, with no 'connecting to server' or buffer delays. QuickClips also need no external player window launched, to clutter up the display and usability of the web page.

The example Beatnik gives for the use of QuickClips is an on‑line record store, where clicking or rolling over elements such as album covers or track names gives the user a brief preview of the relevant album or track. This example could be applied if you have your own home page to promote your music, giving your audience brief pre‑download or pre‑buy audio teasers. Take a look at Beatnik's QuickClips example page to see this in action, at www.beatnik.com/showcase/quickcl..." target="_blank.

Adding QuickClips to your own page does involve some JavaScript programming ability, though sample code is available that you could adapt without too much difficulty, especially if you are already familiar with HTML. A QuickClips extension is provided to make life easier for programmers, and contains three ready‑made instructions for talking directly to the Beatnik plug‑in. The first is the Play command, which starts playback of a QuickClip and automatically makes sure that only one QuickClip is playing at a time. The second is the Stop command, which halts playback with a short fade‑out, so that the audio doesn't end abruptly. It's worth noting that Beatnik only provides the fade‑out for you if the clip's playback ends prematurely; you will still need to add your own short fade‑out to the end of a QuickClip to account for when the whole length of it is played.

The third ready‑made instruction provided by the QuickClips extension creates a clickable preview button to indicate when a QuickClip is ready to play (the extension transparently loads audio in the background while the web page is appearing). There's a full tutorial that takes you from the preparation of audio files right up to the process of putting a web page together at www.beatnik.com/software/tutoria..." target="_blank.

Instead of becoming a platform for controversy, Beatnik is being positioned as a way of promoting artists and record sales within the music industry, and perhaps the best example of this is the eMix, a web application that allows you to remix music online.

The eMixes are custom‑made by Beatnik, so there is currently no easy way for you to produce eMixes with your own material, but the number of eMixes online is increasing all the time and currently you can find tracks from Moby, Yes and David Bowie to remix, as well as a few others I'd rather not mention! The increasing number of partnerships being made with major record labels and individual artists will ensure that good content is always available for this purpose.

The eMix really does show off the potential of using Beatnik with JavaScript programming; your own remix actions can be recorded, stored and even emailed to a friend!

Taking the idea of on‑line remixing a stage further, Beatnik have acquired Mixman, a company that specialises in software tools for DJ remixing. The highlight of their product range for most people will be Mixman Studio DL, a tool with which you can combine sounds to mix your own tracks; these can then be exported as MP3s, to the web or to CD. The 'DL' suffix refers to the fact that this version is downloadable. It costs just US$19.95, for either Mac or PC.

To Infinity And Beyond

As with most technology, the usual cliché about the possibilities being limited only by your imagination is true for Beatnik. This is because Beatnik makes the full API available to JavaScript programmers, making it possible to write any number of musical applications that can run in a web browser. For an inspiring example of Beatnik's potential, check out the GrooveTub at www.beatnik.com/showcase/groovet..." target="_blank.

One particularly interesting web page I found has some very useful aural training programs for music education, including melody dictation and interval training. These exercises are constructed entirely in HTML and JavaScript for browsers with the Beatnik plug‑in, and demonstrate the diverse potential of music on the Internet. They can be found at stumac39.music.temple.edu/IWP/toolkit/default.html.

The Beatnik web site is a great starting point for further exploration, containing pages of examples and tutorials that will quickly get you up to speed on how to use Beatnik. The platform offers huge potential for changing how sound and music is brought to the Internet. If you have musical content on your web site, you need to look carefully at Beatnik.

Beatnik offers two tools — the Converter and the Editor — for authoring RMF content. The Converter is a simple Windows‑only tool for converting standard formats such as WAV and MIDI files into RMF files. A 'Pro' version (available for US$24.95) adds support for MP3 importing and exporting.

The Beatnik Editor is the ultimate environment for authoring your own RMF music. While you can do everything with it that you can do with the Converter, the Editor goes much further, offering the ability to create instruments to be played by the Beatnik Audio Engine. However, this power comes at a price: the Editor costs US$129.95, with only a limited demo version available for free download.

One feature that will interest users of powerful computers is the ability to link the Editor with your sequencer of choice, via OMS on the Mac, or MIDI Yoke on Windows (www.midiox.com" target="_blank). This method allows you to compose music with the sounds from the Beatnik Audio Engine, so you are able to hear exactly what your audience hears. Full step‑by‑step instructions for all major sequencers, on both platforms, are included in the new PDF documentation for the editor.

For more information about the authoring tools, downloads and online purchasing, have a look at www.beatnik.com/software" target="_blank. Users of Mixman Studio software will be interested to know that from version 4 they can export their work as an RMF file, ready for use in web 'sonification'.