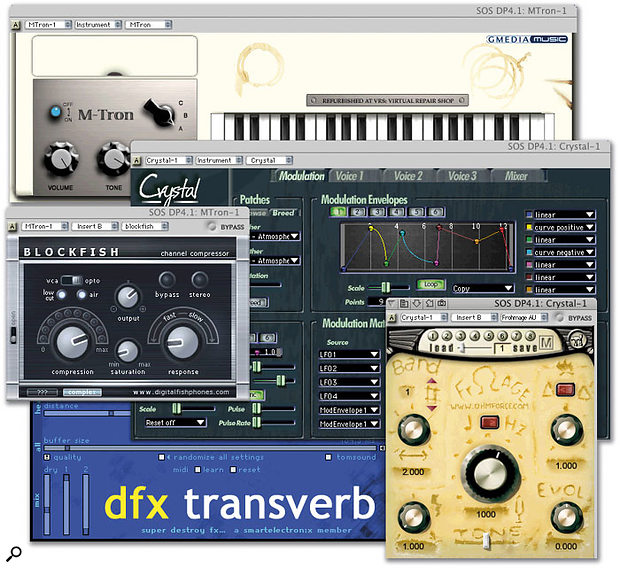 DP 4.1 is here at last, with significant increases in stability and efficiency, as well as support for Apple's Audio Unit plug-in standard. So is Digital Performer finally ready for the big time in OS X?

Perhaps the single most important addition in the DP 4.1 update, which was finally released in late August, is support for Audio Units. Although the specification of this Apple-designed plug-in format is still very much evolving, it seems it'll become the format of choice for native Mac sequencers, with many key developers, such as Native Instruments, already strongly committed to it.

So how does DP 4.1's hosting of Audio Units square up? The short answer to that is 'great': Audio Units look and feel just like MAS plug-ins, can be automated in the same way, and are available for both real-time (in the Mixing Board) and offline processing (via the Audio menu). But, at the time of writing, DP doesn't get along with every Audio Unit plug-in out there, including such stalwarts as B4 by Native Instruments. The reasons for this aren't totally clear yet, but it appears that some aspects of the AU specification are open to interpretation, by both plug-in and host developers, and that some plug-ins are more 'correct' than others. It hasn't helped, either, that Emagic's Logic has so far been just about the only heavyweight Audio Unit host prior to DP 4.1, and thus, quite understandably, many plug-ins have been optimised for it.

To minimise instability caused by errant Audio Units, DP 4.1 subjects them to an inspection process — if they fail it, they're not available for use. MOTU has made the inspection process, fortunately, very transparent — DP scans the Components folders at Library / Audio / Plug-Ins and Users / [username] / Library / Audio / Plug-Ins every time it's booted up, and if any new Audio Units are found they're inspected. The results of the inspection are saved as a text file, for your perusal, in the Documents folder inside your 'Home' folder, but DP's own record gets saved to Users / [username] / Library / Preferences / Digital Performer / Audio Unit Info Cache. If you ever want to force DP to run an inspection from scratch, this is the file to trash.

So which Audio Units work? Here's a list I've assembled, using as many AUs as I can try. Some results are based on my experience of demo versions, combined with reports from owners of full versions, and I didn't test any AUs that are also available in MAS-X format. For more info on any of the following, a visit to www.audio-units.com is recommended.

As ever, checking for the latest update of plug-ins is essential. For example, it's almost a certainty that Native Instruments will get their DP support straightened out sooner rather than later — perhaps even by the time you read this. And smaller developers may well also catch up.

I also want to stress that this is by no means a definitive list. It seems that different users with similar setups can have quite different experiences attempting to run various AUs. The reasons for this may well begin to emerge as a wealth of user experience builds up, but in the meantime it's all rather mysterious! 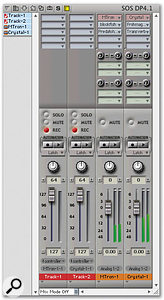 With their reddish uppermost insert slot, Instrument Tracks are easy to recognize, though you still need to drive them from separate MIDI tracks.If Audio Unit support is a leap forward in functionality, Instrument tracks represent a similar advance in simplicity and ease of use. In previous versions of DP, virtual synths have had to be instantiated on conventional audio tracks, then a separate MIDI track set up to play them. While perfectly practicable, this approach could sometimes be confusing, and could cause crashes if an audio signal was inadvertently routed into an instrument-carrying track. There was also an inconsistency whereby some virtual instruments only worked when placed on Aux tracks, and others when on a Voice track.

DP 4.1's instrument tracks, then, are a real improvement. You create them by going to Project / Add Track / Instrument Track and selecting from the sub-menu. Only virtual instruments, not other plug-ins, appear here. Select one and a new track is created, with your chosen instrument in the uppermost insert slot. Processing plug-ins can then easily be applied to the output of the instrument.

What Instrument Tracks don't do is integrate audio and MIDI in the way that might be expected. You still have to select the software instrument as an output in a record-enabled MIDI track before you can start playing it. If this seems an unnecessary additional step, bear in mind that it's actually essential, and unavoidable, for working with a virtual instrument that's multitimbral. Take MOTU's software sampler, MachFive, for example. This can play 16 independent parts, each of which has to be addressed on a separate MIDI channel. Keeping instrument and MIDI tracks separate means that you never need to load up more than one MachFive, on one instrument track, to access all of its multitimbral capabilities.

You may need to experiment a little bit — or, heaven forbid, consult a manual — to find out how individual instruments handle automation. Some, like Zoyd, utilise the same 'ramp and breakpoint' framework that DP uses for audio processing plug-ins. and in this case automation data is written to the Instrument Track itself. However, MachFive relies on MIDI continuous controllers, so you'll need to find out the relevant CC numbers it responds to, and then record data for them in the MIDI track 'playing' MachFive, not the Instrument Track.

Soundshifter, part of Waves' new Transform Bundle, allows fine control over pitch-shifting and timestretching, and delivers high-quality results.A unexpected but very welcome part of the DP 4.1 update is a streamlining of various MOTU Audio System processes. The obvious gains are a much snappier-feeling user interface when processor load is high, faster background processes (such as Merge Soundbites), less processor load at small buffer settings, and general efficiency improvements that return OS 9 levels of performance to DP on OS X. There is, perhaps, still some way to go before DP has the slickness of something like Logic, especially when zooming and scrolling, but this latest round of speed increases should be especially welcome to anyone running OS X and DP 4.1 on older G3s and G4s.

The user is partly responsible, though, for delivering these speed increases. MOTU recommend that Disk read/write size and Buffer size per voice are both set to 150 in Setup / Configure Audio System / Configure Studio Size. In fact, these can be set even lower if you're not working with high track counts or sample rates, for further speed gains. And, although it seems obvious to say, it's definitely worth quitting un-needed applications before launching into a heavy DP session. It's all too easy to have dozens of background processes running, especially if you haven't rebooted or logged out for days, and a sudden request for a chunk of processor time from one of them can sometimes spell disaster if you're pushing your Mac to the limit.