If your PC is overheating, the solution could be as simple as getting rid of the filth — and we don't mean pornography... 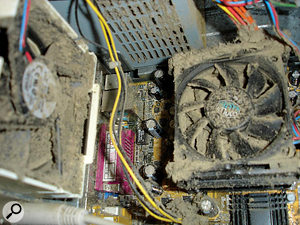 If you want your PC to have a long and happy life, don't let it get into this state!

Specialist music PC builders tell me that the most common reason for new machines to arrive back for repair after about six months is overheating, due to cooling fans and heatsinks becoming so blocked with accumulated dust, cigarette ash and other gunk that they can no longer function. If you have a strong stomach, take a look at 'Dirty, Dirty PCs: The X‑Rated Picture Guide' (www.theregister.co.uk/2009/11/13/ventblockers).

So once every few months you should unplug your PC from the mains and use a soft brush and a vacuum-cleaner brush attachment to remove as much muck as you can find from all the obvious places. These include the CPU fan and heatsink, and any case fans or air filters (often placed before the intake fans at the front of a PC). Don't forget to clean any other heatsinks you find on the motherboard or any expansion cards (modern graphics cards require large heatsinks, as do some soundcards). For inaccessible fans, such as those inside PC power supplies, moisten a cotton bud and use it to wipe the fan blades, or blow an airduster into the PSU from the back of the PC to loosen the internal dust, which should then get blown out by the fan. This latter approach may also help laptop owners. Help your PC to live long and prosper!

Loads of musicians use USB hubs to house multiple dongles, RAM sticks and the like, so here's a warning tale. Being stuck out in the sticks, I've been using various arcane means to improve my pitiful Internet connection speed of around 512kbps. I wanted to buy a powered USB 2 hub so that my USB‑powered modem could remain on all the time and not risk dropping from this new-found speed.

However, while ordering a 'USB 2 hub' on‑line, I very nearly fell for this cunningly worded product description. After further research, it turned out to be merely 'compatible' with USB 2, but actually only capable of 12Mbps transfer rates, rather than the 480Mbps of USB 2. I still find it hard to remember which is which when it comes to USB Full Speed (12Mbps) and USB Hi‑Speed (480Mbps), and have long suspected that manufacturers deliberately blur such issues so they can continue to sell less‑capable products. Whether or not you actually need the increased transfer rate of Hi‑Speed USB is sometimes debatable but, at the very least, it ought to be clear what you're about to buy.

Another confusing area is the serial‑connected SATA hard drive, whose first generation could communicate at a maximum transfer rate of 1.5Gb/s and is, therefore, now known as SATA 1.5Gb/s. As with USB, the designers of SATA aimed for backward and forward compatibility with further revisions of the SATA standard, but when the SATA Revision 2 appeared, incorporating a new SATA 3Gb/s maximum transfer rate, most people assumed that SATA 2 was synonymous with SATA 3Gb/s performance. In fact, SATA 2 has absolutely nothing to do with data rates; it's the name of the standards organisation itself (which has since, confusingly, changed its name to Serial ATA International Organisation or SATA‑IO). So a 'SATA 2 hard drive' may either offer 1.5Gb/s or 3.0Gb/s transfer rates; both are compatible with the SATA 2 standard. Confused yet?

Now we have the SATA Revision 3 standard, offering a new maximum rate of 6Gb/s. But, as you might expect, given its name, many people now mistakenly think a SATA 3 hard drive offers SATA 3Gb/s performance, when it simply means it's compatible with the SATA 3 standard, and could, therefore, offer SATA 1.5Gb/s, SATA 3Gb/s or SATA 6Gb/s performance. To further muddy the waters, backwards compatibility means that you can plug in a SATA 6Gb/s capable drive into a SATA 1 port, but you'll only get SATA 1.5Gb/s performance levels. Check the SATA section of your motherboard manual to see if the full performance of a new and faster hard drive will be achieved.

Ultimately, many musicians are probably using a combination of USB ports, hubs and peripherals, and SATA ports and peripherals that don't achieve anywhere near their maximum capable performance, but they simply don't notice the difference. Isn't technology wonderful? 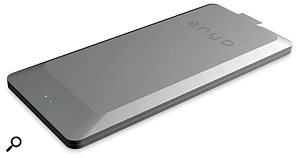 The latest accessory for the modern musician on the move is OCZ's Enyo USB 3.0 External Drive, capable of shifting 1GB of data every three seconds.

OCZ Enyo USB 3 external drives: OCZ Technology have released the Enyo range of external Solid State Drives in capacities ranging from 64GB to 256GB. Capable of transferring 1GB of data every three seconds — and featuring sexy slimline casings — these should prove popular with musicians on the move. See www.ocztechnology.com for more details.

EasyTune audio culprit exposed: The DPC Latency Checker utility (www.thesycon.de/deu/latency_check.shtml) has proved a godsend to musicians trying to track down the cause of audio clicks, pops and shudders, and it has also enabled various culprits to be publicised. Wi‑Fi continues to be a prime contender for public enemy number one, but the EasyTune6 utility provided by Gigabyte for easier overclocking of their popular P55 motherboards is also proving to be a bit of a pig, resulting in regular latency spikes and audio drop-outs. Simply disabling EasyTune could solve your audio problems.

DDR3 RAM on the up: The popularity of Intel's Core i7/i5/i3 processor ranges and their support for DDR3 RAM has boosted popularity for this faster memory, resulting in keener prices compared with DDR2 RAM. Sales for both types are now neck and neck, with DDR3 likely to edge into the lead later on in 2010. When manufacturers have shifted the bulk of their production over to DDR3, we may get further price cuts. Fingers crossed!