With '8 hate' remaining strong, Microsoft haven't had the best of years. Is that all about to change?

Microsoft don't seem to have weathered 2013 very well. Tech web sites are still awash with step-by-step instructions on how to turn Windows 8 back into Windows 7, while a recent study suggested that Windows 7 sales are still growing faster than those of Windows 8, a year after the latter's launch. I've also noticed that many musicians who've been grimly hanging on to Windows XP are finally acknowledging that their ageing PC hardware needs replacing — and grudgingly accepting that they will have to move over, not to Windows 8, but to Window 7. However, the writing is on the wall for them as well, since Microsoft have already discontinued the distribution of retail boxed copies of Windows 7.

Thankfully, larger retailers still have significant stocks of retail copies to sell to customers. There was also a mild panic in December when a Microsoft employee mistakenly announced on their web site that "the end-of-sales date for PCs with Windows 7 pre-installed” would be in October 2014, although this has subsequently been changed to 'to be determined'. So, consumers still unconvinced by the touchy-feely Windows 8 will still be able to purchase the OEM version of Windows 7 for the foreseeable future, and support will be available for all W7 users until 2020.

On The Windows Threshold

Having said that, Windows 8 may yet become a more attractive proposition to the traditionalists, especially if the latest Microsoft rumours prove to be true. Apparently, the next version of Windows (codenamed Windows 'Threshold') may not only include the traditional Start button, but also the accompanying Start menu. Three product versions are mooted, each tailored for slightly different audiences but running from common core code, the aim being to bring Windows 8.x, Windows Phone and the Xbox One closer together in functionality.

The 'Modern' consumer version will feature the touch-based Metro experience and be targeted at Windows RT-based tablets/PCs and Windows Phones running Windows Store apps. There's also supposed to be a traditional 'Enterprise' version for OEM distribution catering for business users running traditional PCs, tablets and other devices that will run both Windows and Modern Windows Store apps. In the middle (and probably most suitable for the PC musician) is the 'Traditional' consumer version, offering both the tile-based Modern GUI and a more traditional desktop environment for those who still prefer the mouse/keyboard experience. As always, we'll have to wait and see, but the next round of Windows development once again promises to be another interesting time for PC users.

Looking Into The Crystal Ball 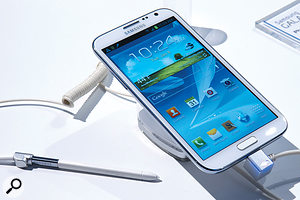 The shape of things to come for musicians? The 'phablet' is becoming an increasingly popular computing format for mainstream users, while our beloved, powerful and configurable desktop PCs slowly fade away in popularity.In the longer term, desktop PCs slowly seem to be disappearing in favour of tablets that are smaller, lighter, simpler to use, cheaper to buy, and ultimately preferred by mainstream users. Recent statistics indicate that in the US a third of all adults aged 18 and older now own a tablet, so it's no surprise that Samsung are already doing so well with their Galaxy range of 5- to 7-inch tablet phones, or 'phablets', and that Intel are focusing on tablets in 2014 in their recently leaked 'road map'. It's likely that fewer and fewer tablets will offer upgradable parts; like mobile phones, people will just upgrade to a newer model with new features every year or two, and expensive support will increasingly become a thing of the past. Moreover, cloud computing is already starting to move mass storage off the personal computer, allowing it to become even smaller, while improving broadband speeds will ensure that we don't even have to install applications, instead just running them directly via cloud services. The most important part of our PCs will likely still be the interface, just as it is today!

Where does this leave the PC musician? Well, increasing numbers of us are working totally in the box with virtual synths and streamed instruments, or with hybrid setups that plumb in a small amount of specially selected audio hardware. So, I suspect that while mainstream users will happily accept cute and very mobile computing options, many of us will still crave more computing power from ever more specialist boxes.

Is this the future of software distribution? Microsoft's Office 365 is offered via a subscription-based purchase that could be taken up by some DAW developers.Microsoft now offer subscription-based online office and services packages, named Office 365, alongside the more traditional 'buy once and use forever' software versions. It's a model with which users of the Adobe Creative Suite may already be familiar — if not always happy! For the developer, the prospect of smaller yet regular payments coming in from the subscription model is a dream come true, since this supports continual development of new features, as well as paying staff while they track down and resolve any bugs. On the other hand, consumers expect that any software they 'buy' should be bug free, and that bugs should be fixed free of charge. In an effort to keep funds coming in, some developers add new features at the same time and impose a modest charge for these updates — incurring the wrath of some of their customers. The subscription approach is in some ways more transparent, although unlike, say, the monthly rental of satellite TV channels, you're not continually getting new content. Microsoft offer some incentives to use their rental alternative, such as being officially able to install and use it on up to five machines for the same price, along with 20GB of SkyDrive online storage, and 60 minutes of Skype calls per month. Some DAW manufacturers are understandably keen to implement this rental model — so it will be very interesting to see how mainstream consumers react to Microsoft's approach.