They boast faster boot times, total silence and greater durability ­— but is a solid-state drive right for you?

Solid-state drives (SSDs) have been a real boon to the PC musician, especially now that modern models are less vulnerable to 'wearing out' due to excessive writes than they were a few years ago. It still pays to buy from a leading manufacturer to ensure you get high-quality flash memory chips, but even a smaller 120GB drive can dramatically speed up computer boot times and application launches when you install Windows on it.

SSDs are not quite so important for audio storage, since a modern 7200rpm mechanical hard drive is perfectly capable of running a host of simultaneous 24-bit/96kHz audio tracks without breaking into a sweat, so you will only ever notice a performance improvement if a mechanical hard drive can't currently deliver all the simultaneous audio tracks you require. Nevertheless, if you do have the cash to buy larger SSDs (500GB and up), they're worth investigating for audio purposes if you insist on recording/playing back bucket-loads of tracks at 24 bit/96kHz and have noticed your hard drives failing to keep up with the strain; if you fancy a totally silent PC; or for a notebook/tablet model when their greater resistance to knocks, drops, humidity and other environmental issues makes better sense for gigging!

Sample library loading can also be sped up using dedicated SSDs, although the gain/cost ratio is likely to be lower. If you use huge orchestral sample library templates you may notice significantly faster project loading, but if you work on that same project all day then the benefits are unlikely to outweigh the extra expense. You may also manage greater polyphony by going solid state with your sample storage, although splitting those libraries across two or more 7200rpm drives will do the same job for a lot less dosh. 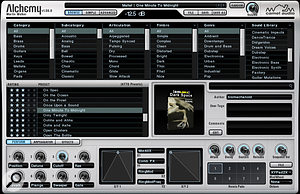 A solid-state drive can really speed up the auditioning of presets in a sample-heavy VST instrument such as Camel Audio's Alchemy shown here.For me, dedicated SSD storage excels when auditioning RAM-hungry VST instruments such as Spectrasonics Omnisphere and Camel Audio's Alchemy, transforming tedious several-second pauses between presets into near instantaneous transitions.

If you intend to use SSDs, you should really be using Window 7 or 8, both of which already include support for the TRIM command, rather than Windows XP or Vista (which don't). TRIM is designed to counter performance drops with SSDs over time, and should already be enabled if you performed a clean install of Windows 7/8 on the SSD. This might not be the case if you cloned an existing Windows install from another drive, so if you have an SSD do check that TRIM is correctly enabled by running the free DriveControllerInfo utility (download it from http://download.orbmu2k.de/files/DriveControllerInfo.zip) and look for the tell-tale TRIM enabled on its top display line. If not, you'll need to right-click the CMD utility from the Start menu and choose its 'Run as administrator' option, then type in the somewhat arcane line, 'fsutil behavior set disabledeletenotify 0'.

Remember that defragmentation is an irrelevant process for an SSD, since they don't have any moving mechanical parts; however defragmented the files get, it won't affect their access time, and may shorten its lifespan, so don't be tempted to run any fancy defrag utilities. By default, Windows 7 should also disable Scheduled Defrags for all solid-state drives, but it's worth double-checking this by entering 'Disk Defragmenter' on the Start menu and looking at the scheduled defragmentation status for any SSD drive/partitions. In Windows 8 the defrag tool is termed the Storage Optimizer, and although this does include SSDs in its weekly defrag regime it will only, in fact, defrag mechanical drives, instead sending 'trim hints' to any SSDs it finds.

Some musicians seem to be confused about SSD page-file placement, and move their page-file to a separate hard drive to avoid unwanted write activity. However, Microsoft themselves consider that "there are few files better than the page file to place on an SSD,” because typical pagefile activity is small random reads or larger sequential writes, with the reads outnumbering the writes by a factor of 40. So, if you install Windows on an SSD, leave your page file on there as well, unless you're desperate for space, in which case leave a small page file on the SSD and create a larger one on another drive. Finally, for optimum performance you should really try to ensure that 25 percent of your SSD is left as free space, otherwise write performance is likely to slow down.