MOTU's Digital Performer 8 includes some neat new plug-ins — many with applications beyond the obvious.

Subkick was one of the many useful new plug-ins introduced in Digital Performer 8. In essence, it's an audio-triggered drum reinforcer that lets you beef up (or even replace) kick drum sounds in your mix. MOTU's description of Subkick in the Digital Performer Plug-ins Guide is obtuse, and pompous to boot. Thankfully, we can ignore all talk of hysteresis voltage, and also ditch the notion that Subkick is somehow a 're-miking' tool based on the characteristics of using a speaker as a mic. This is a kick-drum synth pure and simple, designed to be triggered by typical drum attacks or other transients.

The best place to instantiate Subkick is, unsurprisingly, on a spot-miked bass-drum track. Alternatively, you can place it on an aux track that's handling the individual bass drum output from EZ Drummer, BFD3, or your virtual drum weapon of choice. You can try it on a full drum mix or a feed from overhead mics, but expect Subkick to trigger from all transients in that case — it doesn't specifically seek out bass frequencies.

With the plug-in started up you can immediately hear what it's going to contribute by clicking in the area around the pedal and beater graphics to manually trigger the sound. If you play your sequence, you should also see (and hear) Subkick trigger automatically. Control over sound is delivered through just three parameters: Pitch, Resonance (the 'boominess' of the drum) and Drive, which adds harmonic distortion. Any extra level added by dialling in some drive can be tamed by backing off the Sub Trim knob, and the balance between your original kick and Subkick's synthetic contribution is done with the Mix knob. Whack that up to 100 percent and you'll hear only Subkick, but for typical acoustic drum reinforcement, a balance of around 30-50 percent would be more normal, with fairly low-pitched Subkick sounds underpinning your mic capture for extra oomph. 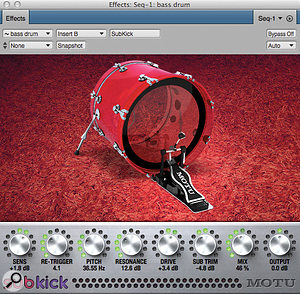 Two parameters determine Subkick's responsiveness. You'll want to turn up Sens[itivity] if your incoming drum sounds are at a generally low level, to make sure Subkick responds to all hits. And turn down the Re-trigger knob if you're getting any sort of 'chattering' or multiple triggering, perhaps in response to really flabby bass drums or unwanted spill.

As you can see, Subkick is easy to use, and in most cases, it works reliably and fulfils its 'extra welly' role perfectly. Don't rule out the possibility of using two instances of Subkick in successive Mixing Board insert slots. One can be tuned to provide low-end weight while the other does a higher-pitched, short-lived (low Resonance level) 'click'. You might also consider automating Subkick's bypass status on and off, reserving all that potential extra depth it provides just for certain sections of a song.

Subkick is far from the only drum-replacement option in DP, and while the technique I'm about to describe isn't as quick or easy to set up, it's potentially more flexible, and can be used to reinforce or replace any drum hits, not just kicks.

The Trigger plug-in has been around for donkey's years and has a bit of an ugly, utilitarian vibe, but can work well with the right material. Instantiated on an audio track it generates MIDI notes in response to transient peaks in the incoming audio. You then use the MIDI data to drive any synth or sampler you like: just configure a MIDI track with Trigger as its input and your instrument as its output.

In Trigger, turning up the Threshold knob decreases its sensitivity. On the right, the MIDI note knob controls which note pitch is generated. And at the bottom, the slider adjusts between quicker response time and more representative MIDI note velocities. Unfortunately, in DP8.05 on the Mac at least, the 'Note Value' options for specifying retrigger delay (which helps prevent false multiple triggers) and MIDI note duration in musically meaningful units appear to be broken, and cause the plug-in to become unresponsive. However, the Realtime alternative seems to work fine. 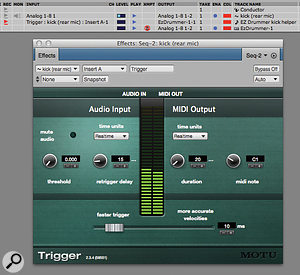 Here's the basic setup for using Trigger, as seen in DP's Tracks window. Instantiated on the mono kick-drum track, Trigger is generating the MIDI note C1 in response to drum hits. That MIDI data is directed to EZ Drummer via the MIDI track. Make sure you have the Multi Record option enabled in DP's Studio menu so you can choose specific MIDI inputs like this.

What you'll discover when you use Trigger in anger is that its response always seems to be delayed, even when its slider is set to 0ms. It's a straightforward latency issue, which arises because Trigger doesn't have any clever lookahead options. The delay is reduced if you run a smaller buffer size in Setup menu / Configure Audio System / Configure Hardware Driver, but ultimately, you'll always get the best results if you just record Trigger's output into a MIDI track and then manually drag or nudge back the notes to align with your audio track, zapping any false, missing or mistimed triggers at the same time.

Another drum replacement plug-in known to work well in DP is the heavyweight Drumagog ($149 and upwards, www.drumagog.com) which can both host its own drum samples and, in more expensive versions, generate MIDI too. There's also the simpler ApTrigga (€35, www.apulsoft.ch/aptrigga) which only triggers hosted on board, but does so very reliably. A 64-bit version is apparently in development.

Moving from percussion to other instruments, DP is in a minority amongst DAWs in offering its growing range of guitarist-oriented processors and effects as individual plug-ins, rather than some kind of self-contained virtual pedalboard. But whatever the pros and cons of that system for guitarists, it definitely makes it easier and more convenient for the rest of us to borrow the odd pedal for general mixing duties. And on that score, two that were introduced in DP8 are well worthy of use on a variety of sources.

Springamabob is a spring reverb, mindlessly easy to use, but surprisingly flexible and valuable as another distinct reverb 'flavour' to have up your sleeve, for piano, drums, vocals and more.

Its Mix knob is your standard dry/wet mix control. Dwell, in practice, controls the reverb decay time, while Tone is a treble EQ, the effect of which is particularly noticeable on the reverb tail. The three buttons across the middle call up the type of spring design the plug-in emulates: two scattered, splatty-sounding long-springs (left and middle), and a denser and more coherent short spring (on the right).

The really distinctive feature of Springamabob as a general reverb is that there's great complexity in the sound, but nothing akin to pre-delay or early reflections. So it 'speaks' immediately, the Mix knob can be run very wet without the whole effect going to mush, and in fact you can, if you like, treat the plug-in as a character processor rather than just a reverb. Yes, it'll do those Pulp Fiction surf guitar tones, but a whole lot besides too, especially when some vintage, lived-in vibe is called for.

Equally powerful as a character processor is Analog Delay. This is a useful addition to DP's delay line-up of Echo (a simple multi-tap delay) and Delay (a more complex stereo/ping-pong design) because of its overt vintage character, which you'd struggle to achieve otherwise. The linearity of your input signal immediately goes to pot, and the ensuing echoes take on a deliciously warm and creamy distortion. While most parameters are completely standard, notably the dry/wet Mix control, the non-tempo-locked Delay time, and the Repeat (feedback) knob, two features are noteworthy. 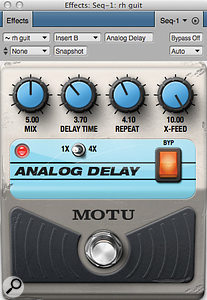 That X-Feed knob controls the stereo behaviour of the sound, so for a mono-to-stereo instance of the plug-in, the 12 o'clock position makes it mono, and turning left or right introduces a ping-pong element. For stereo-to-stereo instances, the 12 o'clock position removes stereo separation from the echoes, while zero preserves the original channel relationship, and 10 flips them — quite subtle.

The silver footswitch has a role to play, too. Clicking it toggles the delay effect on and off as you'd expect, but it's not just engaging the plug-in's bypass (which has a separate switch). In fact, when the echoes are silenced using the footswitch, the delay circuit is actually still working in the background. Tap it and suddenly the echoes become audible. You can use this, therefore, as a kind of 'selective delay' tool, adding the odd echo here or there, or to turn on and off high-feedback loops and textures 'caught' in Analog Delay's buffer.