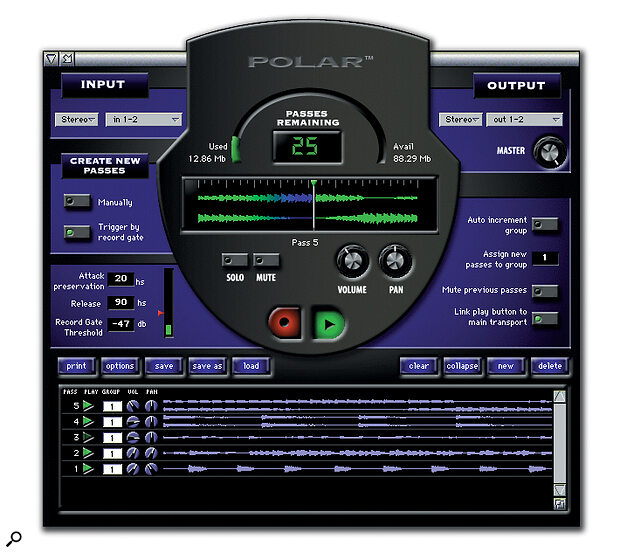 Logic and Cubase owners have had their own dedicated SOS columns for several months — so we're now devoting space to another of the world's favourite sequencers, MOTU's Digital Performer. Long‑standing DP user Robin Bigwood presents the first of this regular column.

MOTU's MIDI and audio interfaces are mainstays of the computer audio market, but their flagship Mac‑based sequencer Digital Performer is less well known in Europe, although it has always been popular in the USA. A development of the MIDI‑only Performer, which is still available in its own right, Digital Performer has steadily evolved to the point where it now represents a serious alternative to Logic and Cubase for European users, hence the instigation of this regular column. However, far from being some sort of quirky 'third way', Digital Performer is now attracting third‑party support from the likes of Antares, Waves, Bomb Factory, Kind of Loud and Native Instruments, to name just a few, and has been offering reliable Rewire routing and sync for a while. And by using VST Wrapper or Pluggo, Performer users have access to virtually all currently available VST plug‑ins and VST 2.0 instruments. 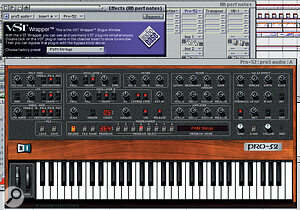 Running a VST plug‑in under DP with the aid of VST Wrapper.

I switched to Digital Performer from Opcode's Vision a couple of years ago, and it's a decision I've never regretted. I've used it for songwriting, teaching, multi‑channel theatre sound, classical two‑track editing and multitrack mastering amongst other things, and have found it musically inspiring and frequently very rewarding. It's also been absolutely rock‑solid, even on my extension‑stuffed Mac, which is used for everything from page layout to video editing. In these monthly Performer Notes columns I'm going to be passing on some of the experience I've gained over the last few years, exploring some of Digital Performer's most creative and productive features, and looking for ways to use this great sequencer to its full potential. This is especially true now that a Mac OS X‑friendly Digital Performer v3 (or DP3 as MOTU seem to like calling it) is on the horizon, with configurable surround panning, Pro Tools file support, single‑window MIDI and audio editing, audio‑to‑MIDI conversion, Rocket Network compatibility, and a wealth of other exciting features. An interesting time lies ahead...

I thought we'd get this column underway by taking a look at a feature unique to DP, the 'Performance Oriented Loop Audio Recorder', otherwise known as POLAR. POLAR allows live audio to be recorded, looped and layered in a highly intuitive and interactive way. That's because recordings made during a POLAR 'session' don't go on to disk via a RAM buffer as is usual on DP, but go straight into RAM. Amongst other things, this means POLAR can play back a loop the very instant it's been recorded, and as such it allows overdubs and alternative takes to be laid down without ever needing to stop and rewind. Using POLAR can be a creative and strangely liberating experience, and it's surprising just how many applications can be found for it. It's ideally suited, for example, to building up layered backing parts of all kinds — pitched and unpitched percussion, guitar riffs and chord patterns, backing vocals or even sound effects. Whatever it's used for, POLAR somehow seems to encourage experimentation, and you'll find yourself trying out things that might never normally have occurred to you.

Both visually and in operation, POLAR is almost like a separate application (see screenshot below), with only its loop length being set from DP's Tracks window. The POLAR window is dominated by the central waveform display. At the top, there are controls for Input and Output routing where you select your recording source input — for example, external hardware inputs, a buss or buss pair. The last option is handy if you want to route multiple inputs to POLAR simultaneously or send your signal via some of DP's effects. The rest of the window is dedicated to acquiring, manipulating and managing 'passes'.

Pass is a potentially confusing term, but if you think of POLAR like a 1970s tape‑loop recorder then a Pass is analogous to a single loop of tape, which can either be recorded on just once and immediately played back, or repeatedly overdubbed until it contains many layers of audio. POLAR, however, is much more flexible than old loop recorders, allowing you to overdub new passes whilst simultaneously playing any number of previous ones. The choice between overdubbing into one pass or creating lots of separate ones will largely be dictated by personal preference, and by how much RAM is available.

So just how do you go about using POLAR? Well, to record (say) a four‑part backing vocal or live percussion loop, here's how you might proceed. Creating new passes with the 'Manually' option on the left of the window is simplest (although the 'Trigger By Record Gate' option, discussed in a moment, can often prove more useful). The 'Link Play Button To Main Transport' button on the right does exactly what its name implies, linking POLAR's transport with DP's and vice versa. If this is left switched off, POLAR and DP will still be synchronised, but they won't start and stop together. Assuming you have some sort of tempo or beat reference to play to (you could use the metronome or material you've already recorded in POLAR), all you then have to do is use DP's 'Memory Cycle' function to define POLAR's loop length and its position in your sequence. The '7' key on your Mac's keypad toggles Memory Cycle on and off, and its boundaries are easily adjusted by dragging the repeat mark indicators in DP's main Tracks window.

Hitting POLAR's red Record button sets everything in motion — you'll hear any parts already present in your sequence, and you can start playing straight away if you want. As you record, a waveform begins to appear both in POLAR's central display and at the top of the pass list in the bottom half of the window. When you've completed your first pass, POLAR plays back what you've recorded immediately, without dropping out of record mode. If it's a good take, you can launch right in with a new layer, which will be overdubbed on top of your first pass. Alternatively, you can click the 'New' button, at which point the previous recording drops down a position in the pass list, and the central display clears in readiness for a new pass. 'Mute Previous Passes' determines if you'll keep hearing your first pass — and since you're adding extra layers you'll probably want to. You don't have to stop POLAR for any of these functions, and you can take as long as you like between passes (to temporarily drop out of record you just click the Record button again). Individual volume and pan controls next to the waveform for each previous pass let you adjust POLAR's mix on the fly, and you can mute a pass by clicking and deselecting its green Play arrow. To get rid of a pass, you just select its waveform and then click the Delete button.

If you decide to create new passes with the 'Trigger By Record Gate' option you can pretty much use POLAR hands‑free, but it takes a bit of setting up to give you the best results. The idea is that POLAR switches into record once you hit the record button, but doesn't make a new pass until the threshold signal level is exceeded. You can adjust the record gate with the 'Attack Preservation' parameter to ensure transients will not be missing from the start of a pass. However, it's important to ensure that there are no gaps in your recording longer than the record gate's 'Release' time, or you'll find POLAR will create lots of very short passes that eat up RAM and make for unnecessary editing later on.

Of course, at some point you need to 'print' to disk what you've recorded into RAM with POLAR if you intend to use it more flexibly as part of a DP sequence. With the Print options, you can decide whether passes end up as new POLAR tracks in DP's Tracks window, or in the Soundbite window (for subsequent placement in a sequence), or even as separate sound files on your hard disk. POLAR's volume and pan settings can be utilised, and multiple passes can be merged into one soundbite or kept separate. The 'Only Print Selected Passes' option is useful to produce soundbites consisting of different combinations of passes. Alternatively, if you need to resume work on a POLAR session at a later date, you can save the entire session as a separate POLAR document without printing anything to disk.

Next month, we'll look at some more creative possibilities, and how POLAR can be used with some of DP's other features to painlessly gather numerous takes of a single section of music.

If you're running DP on a reasonably fast G3 or G4, software instruments now offer an amazingly cost‑effective way to expand your sonic arsenal. The sheer number of software synths available to Digital Performer users has increased dramatically in the last six months, and in the next few issues of SOS I'll be investigating DP's compatability with 'stand‑alone' software synths, like Reaktor, Rebirth and Reason — but this month, it's DP support for VST 2.0 instruments that is under scrutiny.

The simpler of the two is version 2 of the $39.95 VST Wrapper by the Dutch company Audio Ease, available as a download from www.audioease.com. VST Wrapper (shown in operation at the top of this page) is a good thing to have around, if only to take advantage of some of the better freeware VST plug‑ins out there, but it's for VST 2.0 support that many people will buy it. Audio Ease claim VST Wrapper v2.0 has been tested with the Pro 52, PPG Wave 2.V, Neon and Model E plug‑ins as well as Steinberg's VB1 freebie, and in my experience these all run well. TC Works Mercury 1 also works, as does Native Instruments' superb B4, but there are currently some problems with GMedia's memory‑hungry M‑Tron and Steinberg's LM4. Audio Ease say they're working on it.

Cycling 74's Pluggo, available for $74 from the company's site (www.cycling74.com), includes a wide‑ranging set of plug‑ins, in addition to VST 2.0 support which works just as well in my experience as that of VST Wrapper. Pluggo can even get GMedia's M‑Tron going fairly reliably as long as DP has adequate memory allocation. There is one thing to watch out for, though — VST Wrapper and Pluggo require separate plug‑in folders if you want to run them simultaneously.

Setting up a VST instrument in VST Wrapper or Pluggo is easy. First check FreeMIDI Setup's preferences (see screenshot below) to see that the 'Inter‑application MIDI' option is turned on (or, in OMS, that the IAC driver is enabled) — if it's not you won't get anywhere. Then, in DP's Mixing Board, place your instrument in an audio track's insert slot just as you would a regular MAS plug‑in — it makes little difference if the track is a voice or an aux. The instrument's window appears, and you then switch back to the Tracks window, select the VST instrument (which will now be an option in a MIDI track's Output popup), record‑enable the track and away you go. On my own 350MHz blue and white G3 latency has never been a noticeable problem, and whilst the response from VST synths isn't quite as snappy as the real thing, it's still perfectly acceptable.

Next month, I'll be looking at automation and remote control of VST synths, and considering some less obvious ways of using them in sequences — get ready for some virtual knob‑twiddling!