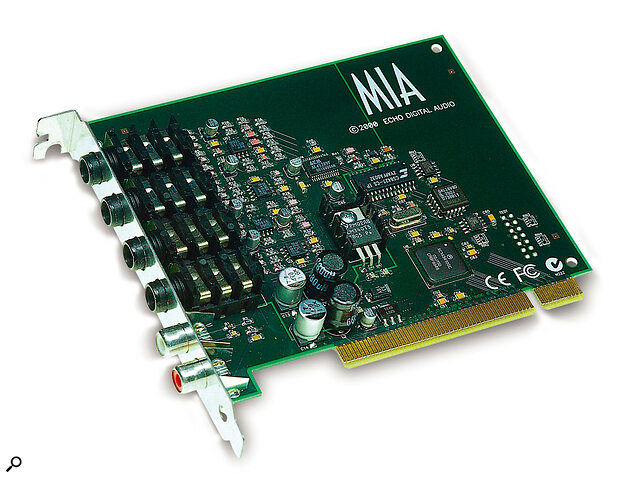 Echo's Mia soundcard offers a tempting feature set for those who don't need lots of inputs and outputs.

Martin Walker muses on whether there is really any such thing as a bad soundcard, and extends some helpful advice on how to make sure you get the right one for your needs.

This month I finally bought a new soundcard, the Echo Mia, to replace my much‑loved but ageing Gina, and I was reminded of my seven‑part set of PC music FAQs, entitled 'Which Soundcard?', on the new SOS forum. When I wrote them I took a structured approach, starting with basic advice such as always buying based on what features and support are available now, and not on promises of things to come, and then going on to discuss recording quality and how much benefit you are likely to get in the real world when moving up to 24‑bit converters.

However, I devoted three of the seven FAQs to what I consider fundamental issues — such as how many inputs and outputs you actually need, whether or not you need digital I/O to transfer recordings from other gear or sync to it, and what benefits you can expect from cards with extra onboard DSP. By the time you reach the final FAQ, 'So which one should I buy?', you should be in a slightly better position to judge the merits of the many features provided by the multitude of modern soundcards, and be able to make a more informed choice based on what you want to do with your soundcard.

I know that it's human nature to want someone else to help you make the final decision, but even so I was rather surprised, the last time I visited the SOS forum, to find that this final FAQ had been read more than twice as many times as any of the preceding ones. Mind you, this ties in with one of the most popular questions on many music forums, namely 'I've got £??? to spend. Which soundcard should I buy?'

Judging by the many and varied answers to this question I've come across over the last few years, many musicians either swear by the soundcard they are currently using, or totally damn it — there are few happy mediums. These opinions are obviously based on their personal experiences, and whether the particular model lives up to their original expectations or has caused them any problems.

Now I know that I'm lucky enough to have been able to try out a total of 46 soundcards to date, and that my technical background in electronics and computers puts me in a rather better position to cope if I do experience trouble, but if even half of the problems attributed to specific soundcards were based in fact, the companies in question would surely have gone out of business long ago. 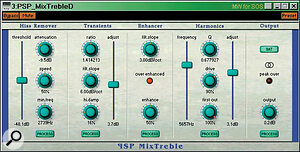 So what goes wrong? Well, firstly there's still a lack of information about compatibility. Plenty of musicians with non‑Intel‑based PCs buy new soundcards on the assumption that they will work with any PC and are then furious when their PC won't even boot up after the soundcard is installed. I can understand their frustration, and fortunately soundcard manufacturers are now recognising that there are plenty of musicians with Athlonbased machines, and are making it more obvious on their web sites which components are and are not compatible with their products. If you can't find this information on the web, a quick phone call to the distributor or manufacturer before you make your final decision should soon resolve the matter.

The second main issue raised on forums is of soundcard driver availability. Many people say they have been waiting for a particular driver for six months or more, and are understandably angry at this. Personally, I would never buy any music product that didn't fulfil my current needs — promises are just that, and much can go awry between an announcement by marketing people and the release of a final bug‑tested version of a new driver.

Just as many forum grumbles relate to the quality of existing drivers, and the quantity of bugs they still contain. Of course, some bugs do exist, and I also discover the odd one during my many soundcard reviews — mostly minor ones, but sometimes ones that no‑one else has discovered, which manufacturers are surprised that no‑one else (including themselves) has previously spotted.

However, some musicians seem to struggle for months, buying soundcard after soundcard and trying to eradicate problems such as clicks, pops and system crashes that they attribute to soundcard driver bugs. However, I suspect that many of the causes lie in the rest of the PC in question. This would explain why many other musicians with exactly the same card have no problems at all, and is another reason why I've covered Multi‑booting in my PC Musician feature elsewhere in this issue.

The result of all this is that some musicians become convinced that certain makes of soundcard work well, and others don't, which explains much of the 'hate mail' for particular manufacturers on various Internet forums. Judging by my own experiences with a wide range of soundcards, I don't believe this. Sure, the occasional rogue design causes a lot more problems than most of the others, and in other cases one particular model becomes well known for working reliably with almost any system, but in general there is no such thing as a 'bad' soundcard. 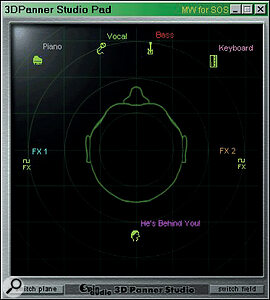 Spin Audio's 3Dpanner Studio lets you position each audio track in 3D around you.

All of which brings me right back to the start of this month's column. Why did I end up buying the comparatively low‑cost 2in/2‑out Echo Mia when I've tried out so many more expensive soundcards in my PC? Well, I don't personally need to record more than one stereo input at a time, but have been using Gina's multiple outputs until now to run Cubase VST and GigaStudio, along with a few soft synths. However, although I do have rackmount effects for use with my sampler and hardware synths, I don't use them on the soundcard outputs. For these I use software plugins, so that I can add effects to individual instruments.

So, as Mia has on‑board DSP mixing, I don't personally need multiple outputs either. Virtual ones are perfectly adequate, and save me paying for lots more DA converters that I don't really need. And once the DSP has mixed down my four outputs to a single stereo one, I only need to allocate two channels on my hardware mixer, rather than up to eight as I do at the moment. In addition, like many other cards I've reviewed recently, Mia uses one of the latest AKM 24‑bit/96kHz converters, that give noticeably better sound quality than the older 20‑bit ones of my Gina card, even when recording at 16‑bit. The final factor for me was Mia's balanced analogue I/O — my mixer also has balanced inputs and outputs to take advantage of these, so for me it proved the perfect solution.

Before other musicians and soundcard manufacturers turn on me, let me reiterate the words for me. Each of us has differing requirements and budgets, and this is why there are so many high‑quality soundcards available to choose from. So if you're planning on buying a new soundcard, think long and hard about what exactly you want to achieve with it, and write a shortlist of the features you need to do this. The procedure should help you narrow down the number of inputs and outputs, thrash out questions of digital I/O format and DSP support, and generally identify suitable models.

Check with shops, or on the manufacturer's web sites, which of your choices is compatible with your PC, and whether or not they already have suitable drivers for your current operating system, and you should end up with possibly two or three alternatives. Now check the forums to see what other musicians are saying about them, and your final choice is far more likely to do what you really wanted it to in the first place. Good luck!

PSP Audioware have added to their range with another plug‑in. Like previous offerings, this one concentrates on enhancing sounds rather than mangling them beyond recognition.

MixTreble features four sections. The first is a dynamically‑tuned low‑pass filter devoted to Hiss Removal, while the second is a high‑frequency compander designed to revitalise Transients. The Enhancer adds a clever twist to our old friend stereo widening, by including a high‑pass filter, so you can leave the bulk of your track as it is while spreading the transients and HF detail that define location. The Harmonics section adds odd and even harmonics above the chosen filter frequency, and there's a switchable soft‑clipping facility. MixTreble's aim is to improve the signal‑to‑noise ratio and add air and detail to individual tracks or the final mix, and in many ways it succeeds. A demo version is available for download, but the full version will cost just $30 to register.

Like all dummy head‑related techniques, the 3D effects only really work with headphones, but if you're interested in spatial localisation, download the demo version immediately. The full version is $95, and various discounts and even free updates are available for existing SpinAudio customers.

The same drivers also support Yamaha's DS2416 DSP Factory. They allow multiple applications to access this card simultaneously, and provide better performance for those people who are using both cards.