It's a Reason reverberation extravaganza this month, as we look at the tools available and how to use them.

As familiar as an old pair of slippers, the RV7000 is a fine-sounding, flexible reverb.

Reverb is a crucial treatment for everything from vocals and drums through to synth pads and orchestral strings, and in the latest versions of Reason there are more reverb devices available to us than ever before, even if you leave third-party Rack Extensions out of the equation. This month's column, as you will have guessed by now, is going to focus on reverb in Reason.

Let's get straight to it and look at Reason's bread and butter reverb, the RV7000. As is the case with any reverb, you have to decide if you're going to 'insert' it for an individual instrument or audio track, or if you'll patch it into one of the mixer's aux send/return loops. Inserting dedicates a reverb totally to just one device (or device group), while patching into the mixer potentially 'shares' it amongst many mixer channels. There are no hard and fast stipulations — the Propellerhead police will not be paying a visit whatever your preference — but there is one rule of thumb: for reverbs on mixer auxes, set their wet/dry mix knobs 100 percent wet, so that they don't confuse your mix by adding any more dry, untreated signal. For inserts, adjust the wet/dry mix to taste.

Back to the RV7000. When you create it, it's a slim little thing, presenting only its main parameters, including a Decay knob. This governs Decay time, controlling the length of the reverb tail. However, the true power and flexibility of the RV7000 is revealed when you click on the triangle next to its Remote Programmer socket. The key control is the bottom left Edit Mode button, which cycles the RV7000's 'soft' knobs through controlling reverb parameters, its built-in EQ, and a Gate. Those last two are only active if their Enable buttons are engaged.

The main two ways of adding a reverb to your mix — 'inserted' directly for a device (left) and patched into a mixer send/return loop.In Reverb mode, spinning the Algorithm knob gives access to seven distinct reverb types: Small Space, Room, Hall, Arena, Plate, Spring and Reverse. There are two delay algorithms there too — and you can check out the Reason column from back in February 2010 for more on those. Each algorithm has its own complement of parameters, which appear on the other soft knobs. These are the key ones to watch out for:

Room Shape controls the pattern of those early reflections. Try selecting the Hall algorithm, turning up the room size, and looking at the individual 'spikes' near the left-hand side of the red reverb graphic. Change the Room Shape and the pattern really changes, with a corresponding difference in sound. It's particularly noticeable with drums and other percussive sounds. ER Level & ER->Late: These adjust the volume of the early reflections, and their timing in relation to the diffuse tail of the reverb, respectively. Put crudely, turning up the early reflections (or making them occur ahead of the tail) produces a more 'splashy' and potentially more realistic effect. Meanwhile, turning them off leaves the shimmer of the tail only, which is sometimes really desirable for more artificial, ambient treatments. Predelay makes the reverb — both the early reflections and the tail — come later after the dry signal. Larger amounts can help you use quite long, lush reverbs on vocals, for example, without detracting from the intelligibility of the words. It gives the dry signal a little breathing space before the reverb gets going.

Uhe's Uhbik-A Rack Extension reverb.Mod: the Mod Amount and Mod Rate parameters control an on-board LFO that makes the pitch of the reverb tail fluctuate in a chorus-like way. Use none, or only a little, if you're trying to recreate believable acoustic spaces. If you're after a more ethereal, unnatural effect, though, feel free to go mental.

The RV7000's EQ section is useful because it allows you to sculpt the wet reverb sound without having to insert a separate EQ device. With the soft knobs, you control a shelving low band, and (on the right) a parametric mid-range band. The high band is adjusted with one of the main parameter knobs above.

So that's the RV7000. Compared to it, the half-rack RV7 looks pretty disappointing. Don't rule it out, though: it has its own unique character, and is unsophisticated in a likeable way. If you're into lo-fi, retro, or semi-ironic 1980s tributes, this is the one. Also, three of its algorithms — Low Density, Stereo Echoes and Pan Room — are particularly interesting in their own right, blurring the distinction between delay and reverb.

As ever in life, your options broaden if you're prepared to drop some dosh, in this case on Rack Extensions.

A great low-cost choice is Uhe's €32$39 Uhbik-A. This has three algorithms (selected with the 'Operation' pop‑up menu) that differ considerably in character. It also has a great feature: a Reverb knob that crossfades from early reflections only to tail only, with differing blends of the two in between. The knobs to the left control the early reflections, and those to the right the tail. Separate Bass and Treble decay times contribute a large degree of flexibility, and there's wild Modulation on offer too. It's a nice‑sounding reverb, very flexible, and an absolute bargain.

Then there's the identically priced Deep Reverb from Synapse Audio. This has few controls, no patch section, and just one reverb character. It's a one-trick pony, but what a trick! Clearly a homage to the expensive Lexicon units of the 1980s and '90s, the sound is open, bright and shimmering, and its sound appears to be unachievable with the RV7000, at least. 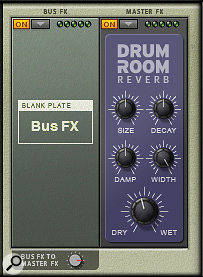 Lurking within Kong, and accessed from its rear panel audio inputs, the Drum Room reverb. Softube offer two reverb Rack Extensions. TSAR1R is €65$79, and is notably easy to use. A 'Time' parameter adjusts the decay from 0.2 to 15 seconds, but clearly has a bearing on additional 'under the hood' parameters as well, not least diffusion and HF damping. 'Color' dials in Dark, Neutral and Bright variations, and that leaves only predelay and wet/dry mix, plus a somewhat redundant Output Volume knob. If you want more control, you'll have to stump up for the €159$199 TSAR1, which uses the same algorithm, but has much more to tweak — separate Time, Density and Tone, and more control over early reflections. It can do vintage and modern treatments and can sound very lush and expensive.

Finally, just when I thought I'd finished writing this column, in roared the RE version of Rob Papen's €99$119 Predator synth. I'll be covering it in more detail in a future column, but I couldn't sign off without mentioning its triple-barrelled effects section, which includes a synth-friendly reverb alongside a whopping 24 other effect types. Quite the multi-effects device, then, as well as being a viciously good synth.

It's far from obvious, but there's actually another reverb device available to you in Reason (before you turn to Rack Extensions): the Drum Room module in Kong. It takes a little effort to patch up. You have to first create a Kong (holding down the Shift key, so it doesn't also create its own Mix device), click its 'Show Drum and FX' button, then use its rear-panel audio input and main out jacks to either patch it into an existing device group in the rack (as an insert), or into the mixer (as an aux). On the front panel, you then choose 'Room Reverb' in the Master FX slot's pop-up menu.

The reward is a single reverb flavour, but an interesting one. Like the name says, it's a room, so you won't get 10-second tails out of it, but, surprisingly, it seems to have quite a lot of tail modulation going on, and you can run it very wet without the dry signal's attacks going to mush. Not a 'go to' reverb, maybe, but an interesting option, especially if you use the adjacent Bus FX slot to load up one of the other mini-FX on offer. The Tape Echo makes a particularly good pairing.

Beyond this, there's one more 'factory' reverb option. If you like being surprised and inspired by presets (or are just really lazy), you can find a lot of more 'worked' reverbs, many of which rely on multiple devices, amongst the factory patches for the Combinator.

To try these out, create a Combinator while holding down the Shift key (to prevent a Mix device being created), and then patch it in in a similar way to what I just described for Kong. Click its Browse Patch button, choose the Reason Factory Sound Bank in the dialogue box that appears, then Combinator Patches > Effect Device Patches > Reverb. Those should keep anyone going for a while, even if some will require quite a bit of reverse engineering to really figure out how they're doing what they do.