Run Windows On Your Mac Skip to main content

Run Windows On Your Mac 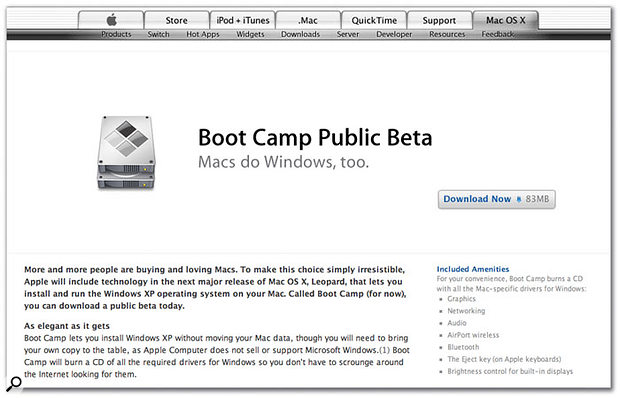 The public beta of Boot Camp, which allows an Intel Mac to run Windows XP, is now available, and its technology will be incorporated into the next major version of OS X, Leopard.

News of Apple allowing Mac users to run Windows on their Macs might sound like an April Fool — but it turned out to be anything but a hoax. This month we investigate the possibilities of running Windows on an Intel-based Mac and discuss why you might want to.

In addition to being April Fool's day, this year's April 1st also marked the 30th anniversary of Steve Jobs' and Steve Wozniak's founding of Apple Computer. While there were expectations that Apple would make something of this anniversary with a product announcement, the Friday and Monday either side of Saturday 1st April 2006 passed without celebrations (or revelations) from Cupertino. However, that's not to say Apple haven't been causing a stir this month...

Hell has a habit of freezing over on a fairly regular basis for the Mac community, and while the frost had been thawing nicely after users realised that the Intel-based Macs were still Macs after all, on April 5th Apple released a free public beta version of some new software called Boot Camp, which previews technology that will be released with the next major version of Mac OS X. Ever since the release of the first Intel Mac, back in January, enthusiasts have been trying to figure out how to boot Windows XP on a Mac. One web site (www.onmac.net) actually offered prize money, based on contributions to the site, for the first person to achieve this goal. In March, just over $14,000 was won when a solution was posted on the site, although it required a little bit of 'under the bonnet' work by the user.

A few weeks after this victory, Apple released Boot Camp, which allows you to do the same thing — install and boot into Windows XP on your Intel Mac — but in a much simpler way. The open source version from onmac.net required you to re-partition your system drive manually (which meant that you had to scrap all the data currently on your system drive) and make adjustments to a Windows XP SP2 install disc on a computer already running Windows. By contrast, Boot Camp features a straightforward 'Assistant' that guides you through adding a new partition to your system drive (without losing your existing data — although Apple recommend that you back up any important data as a precaution), and allows you to use a normal Windows XP SP2 install disc.

While you're setting up Boot Camp, the Assistant will invite you to burn a CD that contains the relevant drivers and other Apple software that will need to be installed once you boot into Windows for the first time. This means that the majority of the Mac's hardware (such as the graphics hardware, wireless networking and so on) is supported under Windows, although, currently, while the built-in iSight camera on the Mac Book and iMac shows up in Windows, it crashes the system if you attempt to use it. Otherwise, running Windows on a Mac is exactly like running Windows on any other computer. There's no emulation, and you'll achieve similar results to those you'd achieve running Windows on a comparable PC.

Using Boot Camp will remind long-time Mac users of the dual-boot Mac OS 9/X systems from a few years ago. In Mac OS X, you can boot into Windows by going to the Startup Disk System Preference, choosing the Boot Camp Windows folder and restarting. Similarly, in Windows, Apple have added a Startup Control Panel to allow you to set the System Folder back to Mac OS X again. If you're booting your system from scratch you can always hold down the Option key, which will let you choose the appropriate Startup Disk.

Boot Camp is good news if you want to run Mac OS X and Windows on the same computer, but for some users the constant rebooting and the inability to run and share data between Mac and Windows applications simultaneously will ultimately be frustrating. Wouldn't it be better if you could run Windows and Mac applications side by side? For years this has been possible with emulation software, such as Virtual PC (which is now owned and developed by Microsoft), but with an Intel-based Mac there isn't much hardware to emulate, as the processor architecture used by both operating systems is the same. 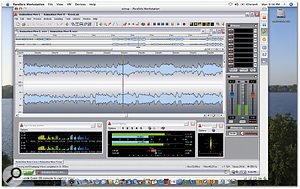 Here you can see Wavelab running on an Intel Mac under Parallels Workstation (beta version 3). Virtualisation software is going to make it much easier to run Windows-only tools like Wavelab alongside Mac-based audio and music production software.

In the Intel-based world, this fact has led to a technology known as virtualisation, where you use the same computer hardware to run multiple operating systems simultaneously. For example, a Windows user could launch a virtual machine running an earlier version of Windows or Linux on the same system, as if it was any other application. But the reason why virtualisation is important is that the amount of emulation is minimised (if there is any), so the performance of the virtual machine is almost the same as if it was the real machine. And, in fact, virtualisation has become so important that Intel are now building hardware support for it right into the processor. The Core Duo and Solo processors in every Intel Mac even feature Intel's VMX (Virtual Machine eXtensions) technology.

We may look at virtualisation in more depth in another issue of SOS, but for now it's worth mentioning that shortly after Boot Camp was released, a public beta version of the first commercial virtualisation software for Intel-based Macs, Parallels Workstation, also appeared (www.parallels.com). Although there are some free alternatives, even in beta form Parallels Workstation runs significantly better and takes only about half an hour to install Windows XP. Some of the free alternatives take hours. Parallels Workstation isn't completely stable yet, and some features are still missing in the public beta, but new beta versions are appearing weekly and showing consistent signs of improvement. You can try the public beta for free with a 30-day trial key and pre-order the final version for just $39.99 (once the final version is released, the price will be $49.99), although, as with Boot Camp, you'll need to supply your own copy of Windows XP.

News of Mac-Intel-compatible applications, drivers, and plug-ins seems to roll in a daily basis at the moment, which is good news for those who have taken the plunge already, or those considering the move.

What It Means For Musicians

With various possibilities now existing for running Windows XP efficiently on a Mac, the big question is why a musician or audio engineer would want to run Windows on their Mac. To begin with, if you go with the dual-boot system using Boot-Camp, this will allow you to run many of the full-blown music-making apps that aren't available on the Mac, such as Cakewalk's Sonar and Project 5, Image-Line's FL Studio, and so on. While you might spend most of your time working on the Mac side, you might have a client or collaborator who works in one of these programs, and it might thus be helpful for you to run a copy without having to purchase a second computer. This is perhaps the most persuasive argument for Boot Camp: Mac users can dabble with Windows applications as if they were running a normal Windows computer, with full driver support for plugging in USB and Firewire audio and MIDI devices. 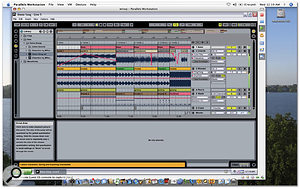 The performance of Ableton's Live running under Parallels Workstation (beta version 4) is comparable to that of a native system.While Boot Camp is quite clear-cut in its advantage — it kind of gives you a second computer for the cost of a Windows XP license — the use of virtualisation software such as Parallels Workstation offers a more interesting workflow for Mac users who want to mix and match Windows and Mac apps simultaneously. Before I say anything else, I should just mention that no matter how good the virtualisation technology becomes, it's unlikely you'll ever be able to run Windows-based plug-ins in a Mac application, or Windows-based applications as Rewire masters or slaves with a Mac application.

However, there are many stand-alone Windows applications that complement Mac music software and that personally I'd love to see available for the Mac, such as Steinberg's Wavelab. With Parallels Workstation, you could run Wavelab alongside your main Mac music software as if it was just another application, although there are a couple of caveats. At the moment, Parallels Workstation has limited hardware support, so it isn't possible to virtualise audio and MIDI hardware so that it becomes available to the virtual machine. This means that for sound you're limited to a high-latency stereo driver that passes the sound from the virtual machine to Core Audio, which isn't ideal. It's fine if you're putting a CD together in Wavelab, but not really appropriate for critical or interactive listening. It also means that USB dongles aren't supported for copy protection. I'm sure this will change as the software matures.

An interesting footnote is that I ran a demo version of Ableton's Live in Windows on Parallels Workstation and was surprised that, despite the inefficiency of the audio driver, the actual audio performance was about the same as running the Universal Binary version of Live under Mac OS X on the same computer. While the screen redraws are rather lagging (sadly, nobody has virtualised graphics hardware yet), this does point to the fact that once the technology comes together you'll be able to run high-performance music and audio software in a virtual machine alongside applications running in your host operating system, Mac OS X.

Field Music: Building A Track In The Studio
1 month 4 days ago.