Making Sense Of It All

With the recording sessions complete, my first priority was to make sure that we’d captured everything we needed organised for me to begin thinking about mixing. Because I’d recording DI signals, and gone to the effort of tracking additional vocal backup parts, my DAW session had grown to an unwieldy 85 tracks. I prefer to be able to mix quickly, without decisions about takes and editing getting in the way, so I treated the editing and comping as a separate pre-mix process. For the guitar part, we ended up using a combination of Steve’s original guide track, which sat so well with the drums, and some of his additional acoustic and electric overdubs. For Justin’s melodic lead part, it was a case of compiling the best bits from a few takes, and I also took the opportunity to re-amp the DI’d signal though the Fender DeVille amp, which I have at my studio. We also put in a simple synth part, copying the guitar’s melody under the solo section, which helped create the aesthetic Steve was looking for at that point in the track.

The only real ‘cleaning up’ I had to do was on the backing vocals as, due to the hectic nature of that particular session there was a fair bit of background noise. This was all pretty manageable, though, and what was left once I’d trimmed the sections of audio was adding nothing but a bit of extra ‘vibe’ to proceedings. With all this done, I ruthlessly pruned anything that wasn’t being used, removing it from the DAW session entirely, and was left with a much more manageable 30 tracks. It was ready to mix!

‘Tears Of Happiness’ was a fairly straightforward track to mix, as I’d had the pleasure of working with some great musicians. My main priority was to be careful not to overwork things, which would risk losing the feel we’d worked so hard to create during the recording sessions.

I spent time working to get the most out of the drum tracks, without having to resort to too much compression or additional samples. I’m pretty meticulous when it comes to optimising phase relationships between the different mics used on a drum kit. Typically, I’ll start with the overheads and balance other signals against them. I’ll experiment with inverting the polarity, and then with phase-rotation plug-ins, and will occasionally drag audio regions forward or back in time if required. It’s amazing how much fuller and punchier your drum mixes can sound if you get this stuff right, and in this instance this work meant I was able to removing pretty much all of the low-frequency EQ boosts I’d made to the kick and the snare in the rough working mix I’d been using while tracking.

For the guitars, the main task was to create a nice blend of the different parts. It wasn’t the type of track that needed any great separation between the parts, so I worked mainly on striking a nice balance of the guitars against the drums and bass. I ended up using most of the original guide acoustic guitar, which I panned slightly to the right, with an electric rhythm part balancing this out on the left-hand side of the mix. I could have panned these a little wider, but I wanted to leave room for Justin’s melodic lead part, which enters in the second verse and creates a nice effect as it fills out the stereo field. 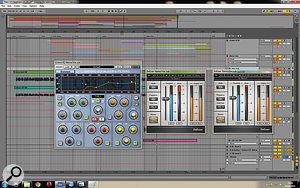 EQ and de-essing for Steve’s lead vocal.A huge part of Steve’s style and appeal is in his lyrics, and it was important to me that they were as intelligible as possible, especially as they’re delivered at quite a fast pace in this track. Some EQ boosting helped achieve this to a certain extent, but only took things so far, as any mid- or high- frequency boosts exaggerated the natural sibilance in Steve’s voice. I ended up doing some quite significant low-frequency cutting, removing everything below about 120Hz with a steep high-pass filter, and scooping out some low-mid frequencies around 300Hz. This enabled me to make the vocal loud enough in the mix without it becoming too much, and a small mid-range boost at 1.3kHz helped with intelligibility.

I ended up using a combination of two de-essers to keep the sibilance nicely under control —that’s often more effective than using one on a stronger setting. I also felt it created a really nice effect to delay bringing the double-tracked vocal in properly until the second verse, and then vary the level of this slightly through the course of the track.

When the mix was getting close to the end, I found myself spending quite a lot of time listening on my ‘grot box’ speaker to fine-tune the key balances. Once happy, I emailed a mix to Steve and then made a series of minor mix revisions until we were both happy. The track was mastered by fellow SOS contributor Eric James of Philosophers Barn Mastering, and I was happy to follow his suggestion of raising the level of the lead vocal by half a decibel.

I read so many posts on audio forums about people searching for some magic plug-in that is going to bring their mix together and make it sound professional, but I can’t recommend enough investing some time in finding a mastering engineer you trust, and who compliments your style of mixing. As well as the sonic benefits, having another set of trusted ears can help to give you confidence with those final mix decisions like vocal and bass levels, and that helps you work a bit faster and improve as a mix engineer.

As I mentioned at the beginning of the article, I find myself working more and more outside of the studio these days. After some initial reservations about this, I now find myself embracing the approach wholeheartedly. Let’s face it, it’s never been the healthiest of career choices being a recording engineer, and just being able to get out and work in rooms with natural daylight and new surroundings is great! Whether you’re working as a pro or as an amateur home-recordist, getting out, seeing daylight and interacting with other people can have a really beneficial effect on your work!

I do think, though, that there are some unhelpful myths surrounding some DIY productions. Younger bands in particular hear about an artist recording a platinum-selling album in their bedroom — how many times have you seen that sort of story in the press? — but when you scratch below the surface, or bother to read the sleeve notes, you’ll usually see professional names associated with the key points in the process.

It was no different for this particular project. Looking at the production for ‘Tears Of Happiness’, with the exception of a little re-amping and the bass guitar, the whole track was recorded in Steve’s front room, though with the drums provided remotely by the drummer himself. But although I enjoyed the recording sessions a great deal, I had to have a mix or listening space that I knew and trusted to be able to make sense of what I’d captured. Although headphones can get you pretty close, without the luxury of isolated control and tracking areas, I often found myself positioning things by pure instinct, placing mics where I thought they would sound good, rather than actually being able to listen and make changes.

Of course, it helps to have access to the calibre of musicians Steve could call upon, but did I find myself feeling as if the sonic quality was being compromised in some way? Not really. Given the choice, I’d rather mix things, like drums, that have been recorded ‘properly’ in a recording studio. For the rest, if I have to swap tracking in the comfort and security of the studio for recording a quality musician, completely at ease in a domestic setting, I reckon that’s really not such a bad trade!

Although just the drums were provided remotely for ‘Tears Of Happiness’, other tracks on the same album saw several parts on the same track provided by musicians from far and wide such as the Shetland Isles and Canada. It can be an exciting and creative way of working, and can provide access to some fantastic musicians, but you have to tread a little carefully as you won’t always be able to gauge your collaborator’s level of experience and technical skills when it comes to recording.

It may seem obvious to some, but it’s worth always mentioning, in a clear but unpatronising way, that you’d like all files to start from bar one, beat one, or from the very start of the rough mix file you gave them. I always make a point of marking and dating where I bounced a particular rough or reference mix from as well, as I don’t enjoy having to line up files by ear. It might also be worth discussing the use of effects. Quite often, it might be a case of getting what you’re given, but it’s worth asking if they can provide you with both ‘wet’ and ‘dry’ options. Of course, if you’re paying for someone’s services you can be a bit more demanding, but even then it’s worth discussing some of these points as well as options and time scales for making changes and revisions. I often specify my own preferred way of receiving files too, partly to ensure that the process is as painless as possible, and partly to avoid the annoyance of file-sharing sites that require you to create an account and then bombard you with ‘opportunities’ to upgrade to a paid version! 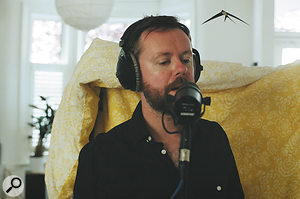 Steven James Adams was the singer/songwriter/guitarist in the Broken Family Band, who attracted a cult following with their acerbic and eclectic take on country music. He went on to form Singing Adams, a more straightforward indie-rock band, who released two critically acclaimed albums, Everybody Friends Now and Moves. His first solo album House Music was released in September 2014 by the label State51.

If you’d like to hear Steven James Adams in action, a mix of the track featured in this month’s Session Notes is available on the SOS web site here: http://sosm.ag/nov14-session-notes-media