The landmark Reason v7 is about to arrive. What will it do for you?

Within a couple of months we may never think of Reason in the same way again. Version 7's External MIDI Instrument device, Spectrum EQ and mix buses look set to broaden its applications and appeal hugely.

In case you haven't heard, here's the big news: Reason 7 is coming soon, and it finally adds features that users have been after for years. We'll return shortly to the CV explorations we began last month, but first let's see what's new in Reason 7.

The headline enhancement, without a doubt, is MIDI Out. This means that you'll be able to sequence hardware synths, and, to some extent, even modulate and automate them from within Reason. The way Propellerhead are delivering this is through a new rack device, the External MIDI Instrument. When you create one, it gets its own sequencer track, and pop-up menus let you route its output to individual channels, for the MIDI outputs available on your computer. You'll also be able to send your synths program-change messages, and the assignable CC (Continuous Controller) knob looks as though it'll generate controller data manually, as well as via a CV input socket on the rear panel.

In short, wow! We'll see how everything works out in practice, of course, but at present a few things intrigue me about this revolutionary new feature. Most of all, I wonder if it'll drive stand-alone software synths running alongside Reason via inter-application MIDI features like OS X's IAC Driver. I see no reason why not.

Just as important as MIDI Out, I think, is the addition of automatic slicing of audio recordings. This basically amounts to the incorporation of Propellerhead's stand-alone Recycle software directly into Reason, and it's going to allow audio quantising and the kind of 'elastic' approach to audio manipulation that is increasingly common in other DAWs.

The implementation looks really nice: intuitive, straightforward and fast. Double-clicking an audio clip reveals slice markers, which can be dragged, individually or in a group, to new positions in the clip, without affecting the audio around them. The markers let you quantise audio, too: select any associated with out-of-time events and then apply Quantise, just as if they were MIDI notes.

Propellerhead also promise that sliced audio can be transferred to the Dr OctoRex loop player for even more creative editing, and Reason now supports many more audio import formats, including MP3, WMA and AAC. 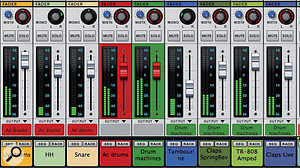 The next group of Reason 7 enhancements all relate to mixing. Two are simple but brilliant. Channel-strip EQ now gets a graphical front-end showing the EQ curve, with draggable handles, superimposed on a real-time spectrum analyser. Buttons in the mixer call this up in a floating, translucent window. Meanwhile Audio Track and Mix Channel devices get level faders and pan controls in the rack! That's going to save a lot of time previously spent having to open the Mixer just for small tweaks. In a similar vein, I also notice that audio tracks' time-stretch algorithm pop-ups are now found in the sequencer rather than the rack — much more sensible.

There are two rather more complex features that both relate to audio routing. Reason 7's mixer has bus channels, so you can create submixes of multi-channel drums, layered guitars or anything else, and control them on just one fader. They show up with red faders on coloured backdrops, so they're easy to distinguish from normal channels, which now have a new Output section showing their bus assignment. Then there's a new command that quickly creates a 'Parallel Channel' for any mixer channel, letting you easily work with parallel compression and more.

Currently, what we know least about in this update is the newly expanded Factory Sound Bank, and a new device called the Audiomatic Retro Transformer. This is supposed to 'add instant vintage flavour' to mixes. What is known, though, is that Reason 7 has stiffer systems requirements than previous versions. You have to be running Windows 7 or Mac OS 10.7 or later, on Intel or AMD dual-core processors. Also, the copy-protection scheme is changing subtly. The little red USB Ignition Key dongle will no longer be supplied as standard (although it'll still be a valid authorisation method, and available to buy separately). And while Internet authorisation during application start-up also continues, Propellerhead will now let us permanently authorise one computer, which will then need neither a dongle nor an Internet connection. Educational institutions and live performers rejoice.

There's no precise release date for Reason 7 yet, but it's supposedly coming in the second quarter of 2013! Upgrade pricing for current owners of Reason 6 will be €129$129. For other prices, and the whole vibey marketing experience, check out www.propellerheads.se.

One last thing: as Reason goes to version 7, Reason Essentials hits version 2. It remains a cut-down version, of course, but gains the REX-style slicing and improved audio format support of its bigger brother. 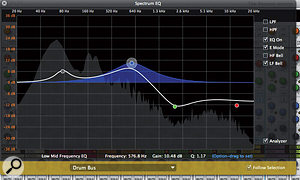 Last month, we went back to basics with CV, Reason's 'control voltage' feature that lets you hook up cables at the back of your rack devices to massively expand instrument and effect modulation possibilities.

Some users, and some songs, will require CV rarely, perhaps never. But if you're into ambitious sound design, or come from a modular synth background, it could be the lifeblood of your work in Reason. And thanks to Rack Extensions, what's possible with CV has pretty much gone through the roof.

Starting simple (at least comparatively!), there's a group of rack extensions that are essentially more complex and better specified versions of Propellerhead's own Spider CV Merger & Splitter. Take Lolth, by Jiggery-Pokery, for example, which offers four CV splitters in one box. Each input splits to four outputs, and has its own tempo-locked delay. A sister device, Miranda, is four mergers in a box. What really distinguishes these from Spider, though, are the gain controls on every CV output. They let you attenuate or invert outgoing signals individually, and break that restriction of only having one inverted output per splitter.

With their CV Suite Line Processor, Quadelectra take another approach to CV manipulation. This device splits just a single CV input, but can modify it in the process, inverting it, limiting upper and lower values, quantising them, distorting its shape in various ways, and converting a unipolar input to a bipolar output (and vice versa).

Quadelectra's CV Suite Line Mixer, which is another 'four mergers in one box' design, also offers something unique. While Spider and Miranda only add together multiple incoming CV values, this can add, subtract, multiply or average them, amongst other things.

Still occupying the same general area, the CV processors from Zvork also offer distinctive features. Volt CB1 combines two CV inputs, adding, subtracting, multiplying or averaging them. But, crucially, it has input and output level meters, for visual feedback about what's going on. The same is true of the Volt SH1 CV shaper, and this has a sample and hold section that can make all manner of rhythmic, stepped and spiky shapes from otherwise smoothly-changing CV inputs.

Possibly the most elaborate CV processing of all is offered by Black and Orange's ReVolt CV Processor. This lets you visualise CV values with both an analogue-style meter and numerical displays. It can split a CV input, while also scaling or limiting it, adding and generating static values, and switching between states according to level thresholds and the influence of another signal. It's complex, but you'll know if you need it.

When The Going Gets Weird

The new breed of Rack Extension CV-processing devices (which all seem to cost €7.50 or $9) are turning Reason into a modular environment to be reckoned with.

From here on in, some of the other CV-related devices on the market can initially look utterly bewildering.

Take Truth, by The Chronologists, for example, a five-channel CV logic gate with 10 logic types. Each of its gates can generate several kinds of signals according to CV input streams satisfying certain criteria. It's clearly not for the inexperienced, and it's unlikely anyone will be using one to make their next dance tune sound really 'phat', but for those that can grasp its possibilities it opens up all sorts of new avenues within Reason. It could automatically tweak synth parameters when other events take place in your song, or you could use it to construct music-generating machines that obey certain logic rules. A partner device from the same developer, Divisor, adds a time dimension to this sort of event processing, taking its cue from analogue sequencer design. I am the first to admit this stuff has not thus far been my 'bag', but I find it amazing to think that Reason has — in no time at all, really — acquired the flexibility to support this sort of interesting and specialist area.