Enjoy the creative possibilities of taking Digital Performer’s bundled plug–ins out of their comfort zone.

Most of the time, when mixing in a DAW like DP, it’s sensible to use the ‘right’ plug–in for the job. Need a tone tweak? Then reach for an EQ. Need a bit more scale and punch for a vocal? Load up good compressor.

However, it can be interesting and creatively liberating to take a more oblique approach to things. By deliberately opting for a less obvious solution, you’ll often achieve unexpected results, and be creatively challenged, in a good way! And it’s all part of really knowing and understanding the tools you have at your disposal, and how even the apparently most mundane can be superbly powerful.

So here are various processing and effect types, along with the plug–ins and settings that might not usually spring to mind. The fact that they all exist in stereo–to–stereo versions mean they’re quite suitable for stereo tracks or even whole mixes. 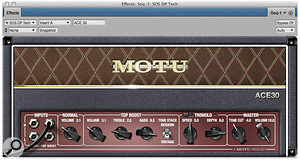 Some of DP’s plug–ins have useful roles beyond what you might normally expect from them. Here ACE30 is used as a general tone/EQ treatment, the guitar pedal Dyna–Squash as a ‘character’ limiter, and Echo as a track retiming tool. 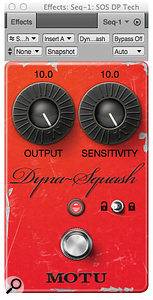 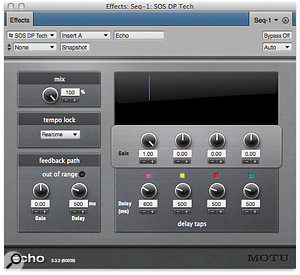 Two of DP8’s guitar amp plug–ins can be amazingly effective for strongly flavoured ‘character’ EQ. In this case, ‘character’ can stretch to some mild distortion too — but in a mix, and especially for rock–style bass, vocals and keyboards, that’s no bad thing.

ACE30 is based on some classic Vox guitar amps. It has two basic tone characters, Normal and Top Boost, which you choose between by clicking one of the virtual input sockets at far left. While Normal offers a reasonably flat frequency response, Top Boost gets a big, energetic treble lift, and brings into play the Treble and Bass knobs (and their associated Modern/Vintage switch). To calm it all down, there’s also the Tone Cut knob in the Master section, which smoothly brings in a low–pass filter.

What’s unexpected are the ‘H’ and ‘L’ options for each of the tone characters. These, respectively, emulate high– and low–impedance circuits at the amp’s front end, and they differ significantly in their character. Low impedance offers a more open sound, while High interacts with the input, especially on broad–band material such as a full mix or mix group, and can produce some pleasant pumping artifacts that might sound great for, say, a drum bus.

There isn’t really a setting at which ACE30 is truly ‘clean’, but the cleanest is to use the Normal L input and keep the Normal volume control low and the Master volume high. This generates a full–sounding, creamier version of your input, which often sounds good for vocals. A world away, in fact, from the Top Boost H option. That’s not much use on a mix, but quite possibly stellar for snarling acoustic bass or really cutting piano, and you can massage it with those tone knobs in the Top Boost section.

Another amp, Custom ’59, can pull off similar tricks, though it’s more complex and a bit dirtier all round. Here the inputs are a touch confusing: ‘I’ is bright, ‘II’ is darker, ‘1’ is high–impedance (which also pumps a bit), and ‘2’ is the cleaner low–impedance option. There are selectable options for input, preamp, tone stage and power–amp characters, and all are usable; distortion is generally least noticeable when Power Amp is set to ‘Preamp’. I’ve had great results using Custom ’59 on a sampled Rhodes piano, where it seems to provide some weight and presence that is hard to achieve using conventional EQs.

There aren’t, sadly, any Fairchilds lurking undiscovered amongst DP’s plug–ins. But the guitar–oriented Dyna–Squash does have real potential for use with drum loops. Try whacking both Output and Sensitivity up full, and leaving the stereo response ‘lock’ switch unlocked. You instantly get a nice surging/sucking effect on material that has plenty of dynamic range.

For generating convincing artificial reverberation, eVerb doesn’t compare well with more modern reverb plug–ins, but it still has tricks up its sleeve. By pulling down the rightmost handle next to its ‘graph’ display you essentially turn off the reverb tail, leaving only the early reflections (which MOTU call ‘Initial Reflections’). Used on a vocal, this can sound like a distinctive kind of chorus, much like double–tracking, and it easily morphs into a tight ambience treatment useful for all sorts of sources. There are five Initial Reflection patterns, selected from the pop–up menu. Then the three handles nearest to the lower-left corner of the graph control level, pre–delay and ‘size’, which is the degree to which the reflection spatter is stretched out over time. The same can be set numerically in the Initial Reflections value fields, once the full control panel is opened with the ‘expand’ button.

DP has a dedicated Wah Pedal plug–in, but for auto–wah instantiate yourself a Multimode Filter. Choose the Low Pass mode, turn up the resonance, range and mix controls, and set the cutoff frequency (unusually labelled ‘center’) somewhere around the middle. The modulation switch should go to the env (envelope) position, and you should use the graph handles here to create a pyramid shape. Also, switch on the L/R In Phase option. 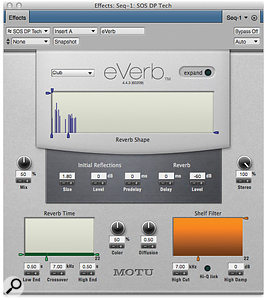 The right settings turn DP’s Multimode Filter into an auto–wah plug–in.What’s happening here is that the envelope is being triggered by the level of audio on your track. That then modulates the cutoff frequency in the filter section. You’ll want to play with the resonance and center values to get the right kind of tone, and then control the depth and range of response with both the envelope scale and the filter range parameters. The mix control sets the wet/dry signal blend, just as with many other plug–ins.

If you ever need to shift an audio track a little way ‘late’, instantiate an Echo plug–in for it. Set it 100 percent wet, put tempo lock to Realtime, and set the gain of the feedback path and all but one of its four delay taps to 0. For the remaining tap turn the gain all the way up to 1.00 and then specify the track delay in milliseconds (from 1–2000) with the knob or value field below.

For everyday stereo ‘utility’ tasks, you don’t need DP’s complex Spatial Maximizer plug–in, just the humble Trim. Instantiated on a stereo track, it offers separate but linkable pan pots for each channel, so it’s really easy to narrow the stereo image, or completely flip it. Trim can boost or lower gain up to 40dB too, and can tame the output of distortion plug–ins (for example) that might be constantly driving your mix into the red.

If you ever need to apply vibrato at the mix stage, as a special effect for example, the Chorus plug–in can help. Set the Mix knob to 100 percent wet. Then the maximum pitch range of the vibrato is determined (rather unintuitively) by the Delay knob, though it can be tamed with the Depth knob. The vibrato speed is governed by the different options found in the tempo lock section — set to Realtime you’ll get an additional rate knob appearing. 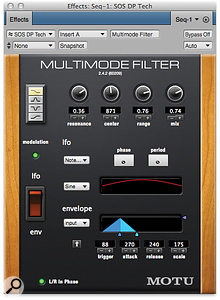 With its tail removed, so to speak, eVerb becomes an interesting ADT and ambience processor.Vibrato applied this way can be surprisingly extreme, and at faster rates and greater Delay settings almost sounds like vinyl scratching. It also shifts the track audio later with respect to every other track in your mix, so you may need to Freeze the track and manually drag the resulting audio back to an earlier time position to restore correct start timing. However, even a 1ms delay time gives a useful amount of vibrato for most purposes, and that usually won’t need correcting.

If you’re ever on a session and need to generate a tuning reference note, instantiate the Tuner plug–in somewhere in your mix. Then just click the tuning fork icon towards the lower left of its interface. A nice harmonically rich ‘A’ suddenly rings out, at 440Hz by default, but adjustable well over a semitone up and down with the frequency field to the right.

There was great and not–so–great news recently from DP–friendly plug–in developers Audio Ease. On the plus side, Speakerphone 2.1 has finally been released, providing much–needed 64–bit compatibility and Retina display optimisation. It’s a free upgrade for registered users of version 2, and still comes in native MAS format, though you’ll need a second–generation iLok to store the licence. With DP an important player in the movie–scoring and mixing field, this is a great development.

But while Speakerphone and Altiverb flourish, the quirky Nautilus and Rocket Science bundles, which included the unique and brilliant RiverRun granular processor and one–of–a–kind EQ Periscope, have been discontinued. The guitar tone processor Cabinet has gone too. None of these plug–ins had made it out of the 32–bit world, and while Audio Ease say they’ll continue to provide basic support and generate authorisation codes, they’re no longer available for purchase, and the web site user forums have disappeared. Ah well, nothing lasts forever