Learn to set up M/S matrixing in Pro Tools and you open up a world of creative processing possibilities.

For most recording and mixing scenarios, conventional L/R stereo is the most useful format. After all, it's how your mixes will eventually make their way to the loudspeakers! However, there are quite a few circumstances where it's useful to work with stereo signals in the Mid/Sides format. Any signal recorded using an M/S mic technique will need to be decoded before it can be played back, but the ability to turn an L/R signal into M/S temporarily opens up valuable processing opportunities at the mixing and mastering stages — see the 'M/S Applications' box.

Stuck In The Middle With You

Quite a few plug-ins now support M/S processing internally, meaning they can take an L/R input, matrix it to M/S, apply separate processing to the M and S components, and then convert the output back to L/R. A few Pro Tools-compatible examples include equalisers such as Blue Cat Audio's Liny EQ, FabFilter's Pro-Q, Flux's EPure, Brainworx's bx_digital and DMG Audio's Equilibrium, along with dynamics plug-ins such as Blue Cat Audio's Dynamics or FabFilter's Pro-C and multi-function plug-ins like iZotope's Ozone and IK's T-Racks. 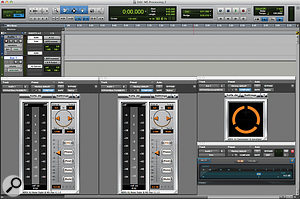 Screen 1: a typical M/S processing chain set up using instances of HOFA's free 4u plug-in to handle encoding and decoding. There are also some dedicated plug-ins for rebalancing the width of stereo material using M/S processing. Brainworx's bx_solo and Blue Cat Audio's Gain Suite in Dual mode are both free; the former is more about monitoring what is happening with the Mid and Sides channels, but does include a useful stereo width control, while the Blue Cat plug-in allows you to adjust the gain of the Mid and Sides components separately. Moving on to a plug-in you need to pay for, Waves' Center has controls to adjust the centre (Mid) and Side levels separately, as well as EQ controls that skew different frequency areas towards the Mid or Sides channels while keeping the overall EQ flat.

If your chosen plug-in doesn't offer built-in M/S encoding and decoding, however, all is not lost. One option is to use an M/S encode/decode plug-in before and after your chosen processing plug-ins. There are free plug-ins that will do this, including HOFA's 4u Meter, Fader & MS Pan and Massey's Massey Tools, though the latter is not yet available in AAX so won't work on Pro Tools 11. As for a paid-for option, there is the Brainworx bx_stereomaker, which will also create a mono-compatible 'stereo' version of a mono file, and then there are Mathew Lane's DrMS and the Waves S1 Imager, M/S Matrix and Shuffler, which can be used as an M/S decoder or to process L/R audio using M/S techniques.

Used on a stereo track, M/S encoder plug-ins typically output the Mid signal on the left channel and the Sides signal on the right. To process these signals separately on the same stereo track, you'll need a plug-in that can operate in Multi-Mono mode rather than as a stereo plug-in. For instance, the first screenshot shows a setup where I have used two instances of HOFA's 4u to encode and decode the stereo signal as M/S. Inbetween them I have placed a Trim plug-in in Multi-Mono mode, which I can use to mute or apply gain to the Mid and Sides signals independently. To apply different settings to the two channels of a Multi-Mono plug-in, you need to deselect the Link icon and then use the L/R drop-down menu below to select the left or right (Mid or Sides) channel. In the screenshot, I have also added an instance of the free HOFA 4u Goniometer & Korrelator, which comes in the same bundle as the 4u Meter, Fader & MS Pan plug-in, 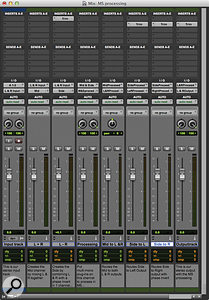 Screen 2: encoding and decoding can also be achieved using routing in the Pro Tools mixer. The Trim plug-in is handling polarity reversal where appropriate. so that I can visually monitor the stereo width of the signal.

This is often the easiest way to implement simple M/S processing, but for more flexibility, including the ability to take the Mid and Sides signals out as separate mono Auxes, you can also set up the Pro Tools mixer to perform M/S encoding and decoding in a variety of ways. Here's one way to set up M/S encoding:

To decode your M/S-processed audio:

Now you are ready to process any audio on the 'Input Track' track in M/S, using plug-ins you insert on the Processing track, and hear the results on the output track. Both of these sessions are available for download here if you want to try it for yourself. There are also plenty of other ways to set up M/S encoding and decoding in the Pro Tools mixer, and if you use sends as well as tracks, you can do so using fewer Auxes than described above.

Here are just a few of the situations in which M/S processing can be valuable when mixing or mastering: