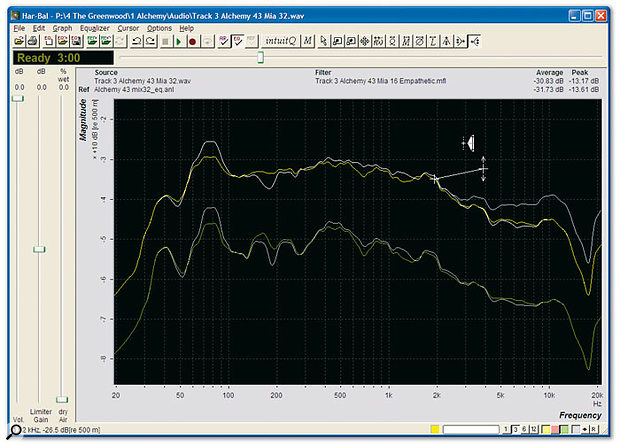 An AMD-Intel price-cutting war spells savings for the consumer on speedy processors. We consider what you should do now if you're in the market for a new CPU, as well as bringing the latest news from the PC music world.

As I write this, the big news is the price-cutting war that has developed between AMD and Intel. In early April, AMD announced dramatic reductions in some of its processor prices; the price of the flagship Athlon 64 X2 6000+ model, for instance, dropped by almost 50 percent, while most other Athlon 64 FX and Athlon 64 X2 models had their prices reduced by smaller margins, and some slower models have been completely axed from the range. In mid-April, AMD also announced a sizeable first-quarter loss and experienced falling share prices, which may partly account for this aggressive new pricing structure.

However, Intel fought back on the 23rd April with their own round of price cuts, which are once again significant, the most notable being that of the Core 2 Quad Q6600 model, whose price drops by almost 40 percent. This will move it onto the radar of greater numbers of musicians looking for a processor rather more powerful than the Core 2 Duo models — although the latter are now cheaper too, with the price of the E6700 2.66GHz model down by 40 percent. The extremely popular E6600 2.4GHz model is also cut by 30 percent, as are prices of other Core Duo, Xeon and Pentium D models.

I bought my own E6600 processor back in November 2006, so I've already had five months of use from it, but anyone who's only just bought a processor must now be kicking themselves. However, if you've been hanging back from upgrading your PC, building a new one, or buying a ready-built system, now's the time to reconsider your options. These will, unfortunately, be complicated by Intel's new Penryn CPU, expected during Summer 2007, which features a smaller 45nm (nanometre) die than previous ranges. This measurement is the average size of a memory cell, and the smaller size used in this new range allows Intel to cram 40 percent more transistors into the Penryn than onto the 65nm cores of the current Conroe Core 2 Duo and Quad range. There's also the possibility of higher clock speeds.

The desktop Penryn models will have a 6MB L2 cache, compared with the 4MB of the Conroe range, as well as about 50 new SSE4 instructions, which should improve video and audio performance (although applications will need updating to benefit from them). However, they are likely to require new motherboards with changes to the BIOS and voltage regulators.

AMD are also gearing up for 45nm manufacture in 2008, but meanwhile are putting the final touches to their forthcoming Barcelona quad-core range, that many are hoping will win back the performance crown from Intel. Unlike Intel's Core 2 Quad, which is two dual-core Conroe chips stuck side by side into a single LGA775 package, AMD's Barcelona is a true quad-core device, and while it doesn't feature radical changes internally, compared to previous models, it will offer substantial performance improvements. Like Intel's Penryn, AMD's Barcelona is currently expected during Summer 2007.

Version 2.3 of the PC-only Har-Bal (www.har-bal.com) stand-alone utility has just been released, and is free to all registered users. I've been following Har-Bal 's progress since 2003, when its 'harmonic balancing' features first caused ripples in the audio world. Version 1 offered a combination of informative visual analysis and a set of useful tools to let you alter the EQ of your tracks to more closely match that of a well-produced track of a similar genre. More sophisticated than the standard 'EQ ripper', it displayed both peak and average responses for the entire track (to control dynamics you concentrate on the peak spectrum, and to preserve the dynamics but alter the spectral balance you work on the average curve), but every EQ change made was loudness compensated. This meant that you could hear the before/after comparison at the same level, to more easily make comparisons without being fooled because one was louder and therefore more impressive than the other.

Version 1.5 added shelving filter options to the parametric ones of the original and included lots of smaller enhancements, but it was version 2 that really got people talking, since its 'Intuit Q' feature claimed to provide the seemingly impossible: a one-click solution to EQ problems. While many musicians remained sceptical, Intuit Q actually worked surprisingly well — not by blindly forcing the frequency response to some notional 'perfect curve' (although Har-Bal 's 'Intuit Match' function can do this if you insist), but by massaging the existing shape to remove sharp bends such as prominent peaks and sudden dips, without altering the essential sound of your mixes.

MP3 audio compression essentially works by searching out stronger peaks and discarding low-level frequency information adjacent to them, because the peaks 'mask' the weaker parts of the spectrum: a by-product of Har-Bal 's smoothing out more obvious bumps is often a more 'detailed' yet balanced mix. I really like being able to hear further 'into the mix', but if you find this extra detail distracting, you can easily use the 'Intuit Null' function to cancel out specific areas of the Intuit Q changes, or use Har-Bal 's high-shelf EQ to tame the high end slightly.

Dell Reinstate XP: Soon after Microsoft's January 2007 Vista operating system release, many mainstream PC companies phased out Windows XP as a pre-installed option for their systems, but on-line customer reaction quickly led Dell (the second biggest PC seller in the world) to reinstate it. Dell responded to requests on their Idea Storm web site (www.ideastorm.com/article/show/61914/Dont_eliminate_XP_just_yet), where there were complaints about Vista software and hardware incompatibility, with many people having to replace perfectly good hardware peripherals, such as modems, printers and scanners, because they wouldn't run under Vista.

Now Dell are once again offering customers the option of having Windows XP Home or Professional pre-installed on a range of their home computers instead of Vista, although as I write this in late April these machines are only available to US customers. Moreover, it's already becoming difficult to find Windows XP on UK high-street shelves, and builders won't be able to buy new XP licenses at all from January 31st 2008, when Microsoft drop it from their range.

Microsoft Help Files Back: As many new Vista users have found to their cost, Microsoft's new operating system cannot read the extremely useful Help files (files with a .hlp extension) that have accompanied many applications since the days of Windows 3.1. To read these files you need the Windows Help program (winhlp32.exe), which has been included with all versions of Windows since those early days. However, Microsoft did not write any updates to their original winhlp32.exe program, and with the release of Vista they concluded that it no longer met their own standards, so they dropped it altogether, as well as prohibiting third-party developers from including the file so that their users could carry on reading third-party .hlp files.

Many software developers have already moved over to HTML or PDF documentation, but I, for one, still have a couple of hundred of the old style .hlp files on my Windows partition that I'd still like to be able to read, so I'm pleased to report that Microsoft have changed their collective mind about Windows Help. You can find more information and download the appropriate file via their Knowledge Base article 917607 (http://support.microsoft.com/kb/...).

The latest version, 2.3, fine-tunes Har-Bal still further, by doubling the track analysis resolution (from sixth-octave to twelfth-octave) and providing the user with switched display resolution. The fixed sixth-octave option of previous versions is now supplemented with a third-octave choice that more closely matches the resolution of the human ear (so you can more easily see which peaks or troughs may prove audibly troublesome), an even smoother one-octave option for spotting trends, and a much more detailed twelfth-octave option that, with the new twelfth-octave track analysis, means you can now home in on individual notes on a semitone by semitone basis, for detailed balancing.

You can now toggle the display of any genre reference curve you've loaded, and there are also Vista compatibility fixes, as well as a few bug fixes. However, the most interesting addition can be found in the new HTML helpfile: an advanced tutorial explaining the new Empathetic Equalisation technique. This, at present, is a manual alternative to Intuit Q's automated approach, created from research into why a few recordings didn't respond to the Intuit Q algorithm, although automated Empathetic EQ will no doubt surface in a future version of Har-Bal.

Essentially, it works by using the new twelfth-octave analysis and display to home in on individual peaks and troughs. You then use the existing parametric EQ tool to manually boost peaks that are lower than the others, taming higher than average peaks by instead pulling down adjacent troughs. You may have to tweak several dozen frequencies in this way to remove the more extreme spectral peaks or troughs.

Once you return the display to third-octave resolution, the resulting smoothed curve should end up reasonably similar to that resulting from using the Intuit Q algorithm. However, by individually tweaking each prominent peak or trough you can often end up with a balanced track that retains better clarity and dynamics. I could hear improvements in clarity even when using the standard Intuit Q with its higher analysis resolution, but Empathetic EQ did seem to have the edge on a few of my mixes — fascinating stuff!

The more I use Har-Bal, the more I like it. Apart from checking mixes and helping to keep tracks at consistent volumes throughout an album, I've found it useful for identifying problems in poorly recorded tracks I've been sent, and it's ideal for restoring elderly tracks with missing frequencies or skewed frequency responses.

Others have found it useful for judging bass end when their own speakers don't extend low enough, and even for reducing the effects of unwanted room resonances in multitrack songs: you import problem tracks into Har-Bal, to identify common peaks and troughs and reduce them, then export the treated tracks back to your sequencer. Har-Bal 2.3 is more versatile than before, sounds even better, and is a wonderful tool for musicians, engineers and producers. 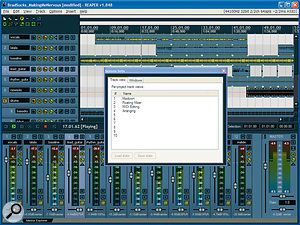 In just a month, there have been 18 incremental releases of Reaper, which now includes many more features, including the screen sets shown here. During my recent SOS review of the PC-only Reaper sequencer, I mentioned how frequently the application was being updated: in the month since I completed the review there have been a total of 18 incremental releases, taking it from version 1.828 to 1.848, and by the time you read this there will no doubt have been others.

You can study all the changes at www.cockos.com/wiki/index.php/ReaperChangelog. Apart from a host of smaller improvements and bug fixes, notable new features already include screen sets, so you can quickly move between different arrangements of tracks and windows, the ability to import files in Radar hard disk recorder format; new waveshaping and dithering plug-ins; sub-sample-accurate looping; and reverb tails that continue when playback is stopped.

I also mentioned that developer Justin Frankel was responsive to user requests (there are almost 1500 threads in the Reaper Feature Requests forum already!), but even I was surprised when, just four days after I mentioned two tiny annoyances I had with version 1.828 (you couldn't name your own plug-in/instrument presets, and when you loaded a new bank of them the new names didn't appear until you closed and then re-opened the FX Chain window), he sent me an email to say that he'd solved both in the next release. Now that's what I call responsive! Check out Reaper for yourself at www.cockos.com/reaper, and read the SOS review in the last issue of the magazine.