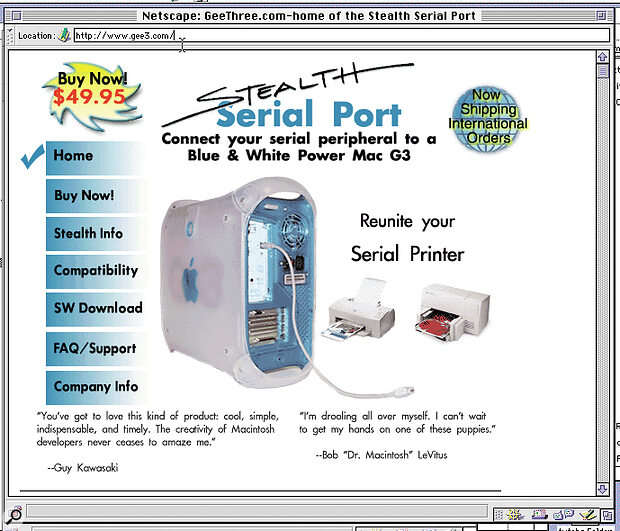 What is the best Mac setup for music? Martin Russ tries to give a straight answer.

SOS reader David Dias nudged me recently and asked what he needed to make music with a Mac — and I know that there are always other people thinking of getting into the Mac music scene. So here's a quick beginner's buyer's guide to accompany last month's overview.

Let's start with some thoughts about someone starting out with MIDI and a budget of around £1000. The simple and quick answer is: don't think that you have to automatically buy an iMac or one of the new 'Blue and White' G3 PowerMacs. Instead you could look for one of the previous generation machines: there are always people chasing the latest and fastest machines, and they leave a nice trail of second‑hand Macs behind them. If your mid‑term aims include heavy use of digital audio tracks then look for a 'beige' 233 or 266MHz PowerMac G3, while if you just want MIDI (or a few audio tracks), then you could go for one of the earlier PowerMacs — a 7300/200 will do MIDI very nicely. All of these second‑hand options should be less than a grand (especially second‑hand), and with the change you can buy a MIDI interface and some software. Many manufacturers of digital audio equipment and software publish lists of recommended Mac models, and these can be another useful source of information.

Although the G3 processor chip (known as the 750) and its forthcoming G4 next generation follow‑on represent the leading edge of 'bangs‑per‑buck', previous processors can be fine for musical use too. Before the G3, the 604e was the one to go for (the 7300/200 I use has one) and the slightly less powerful 603 processor had some very impressive clock speeds for its time although it is less well suited to musical applications, especially digital audio. Some sources say that even a 120MHz 604e processor is okay for digital audio, but its sluggishness may be counter‑productive in creative terms — it depends on your budget and how much digital audio work you will be doing.

Try to go for something which has more than one PCI slot if possible — there have been some amazing bargains on one‑slot Macs in the last couple of years, but they can seriously limit your expansion options (by forcing you to choose between an audio I/O card or a faster SCSI card, for instance). The final thing to check if you want to spend the minimum and go for a sub‑200MHz machine is to make sure that it has a plug‑in processor card so that you can upgrade at a later date — some of the older PowerMacs don't allow this — although you can often pay as much for a faster plug‑in processor card as for a new system.

When it comes to the hard disk, 2Gb is probably the smallest size you should consider, and the low cost of hard disks means that it's usually worth going larger still. Zip drives are arguably too small in capacity for serious digital audio work backup (but fine for MIDI‑only), and Jaz drive cartridges are expensive. Personally, I favour a big hard drive (around 10Gb) and a CD‑R writer, since then you have a system that will let you back up cheaply and make audio CDs too!

A plain and simple £50 MIDI interface (and Thrus on MIDI equipment) will get you started, but those with more than a fw bits of MIDI equipment will need a four‑port or eight‑port interface. Unless you have ambitions with video and other synchronisation stuff, then you won't really need the fancy SMPTE functions, but many multi‑port MIDI interfaces come with them as standard. A true multi‑port interface has all sorts of benefits when you want to add extra equipment, do editing, set up complex routings and so on.

In terms of sequencing software, there are four main contenders: Emagic, Opcode, MOTU and Steinberg. Each manufacturer's products have their own strengths, weaknesses and particular ways of working, and all have options for digital audio on top of the basic MIDI functions. Which one you go for really depends on which one suits your working methods. Try them all out if you can, and choose the one which feels best after playing with it for a few hours. Don't go on immediate impressions.

If you buy an older Mac, it's likely to have an older version of the MacOS operating system. MacOS 7.5 is the earliest you should consider. MacOS 8.5.1 is the system you should be running if you have moved to System 8. In terms of RAM, 32Mb is the bare minimum for MacOS 7.5, while you really need 64Mb for MacOS 8 and up. 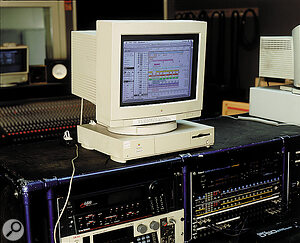 Older Macs can be picked up quite cheaply nowadays, and are perfectly adequate for MIDI, and even some audio work.

As predicted, the 'Blue' G3 and iMac music and MIDI uncertainties are gradually being resolved. In the last month, I've received information about solutions to many of the common questions...

MOTU (Mark Of The Unicorn) are developing USB versions of their MIDI interfaces, but they have solutions available now using their existing MIDI interfaces with the MegaWolf Romulus or Remus serial port PCI cards (as previously mentioned in Apple Notes), the Griffin Technology G‑Port (related to the i‑port iMac port adaptor) and the Stealth Gee3 port adaptor. Surf to www.motu.com or www.motu.com for more information.

The Stealth product is particularly clever. Created by ex‑Apple employees as a web‑only novel solution supplier, Stealth's tiny card plugs into the internal modem slot in a G3, and provides a completely standard mini‑DIN modem port — brilliant! Initially on sale at $39.95, but with a full price of $49.95, you can order one via the web (www.gee3.com); UK shipping will cost an extra $19.95. The software is downloaded via the web too, which avoids you getting a CD with old software on!

The iMac's Ethernet and USB‑only approach isn't good news for those with LocalTalk printers (myself included!), and a number of USB‑to‑serial‑port adaptors are now available. An alternative solution comes from Asanté (www.asante.com), better known for their network cards. The AsantéTalk Ethernet‑to‑LocalTalk Bridge allows you to connect an iMac to other LocalTalk Macs and printers.

After many years of floppy disk‑based copy protection mechanisms, it seems as if the iMac and Blue G3s have finally broken this practice, with many of the software manufacturers changing to floppyless installation methods. MOTU now specifically mention that Digital Performer 2.5, Performer 6.03 and AudioDesk 1.01 will authorise on all Macs without any need for a key disk or 'challenge and response' code schemes.

With over 10 million people having downloaded QuickTime 3 so that they can play the Star Wars Episode 1 trailer, Apple are making the most of the attention by releasing the long‑awaited streaming version in beta form. QuickTime 4 should be available in the full version soon after you read this, but the public beta works well enough to indicate that this is yet another example of the way that QuickTime's underlying design pays dividends. Right from the beginning, QuickTime has been designed as a 'container' for different types of media, with conversion between formats and the addition of extra tracks all taking place within the QuickTime container environment.

Perhaps one of the best bits about the beta of QuickTime 4 is that if you paid for the Pro version of QuickTIme 3, then you automatically get the Pro features enabled in the QuickTime 4 beta. Hopefully this will also be true for the full version! Apple have tried to make the downloading easier too — you initially get an installer (368K) which then controls the downloading of the appropriate files for your computer and your preferences (up to a further 3.8Mb!)

At the risk of blowing my own trumpet, I must mention the recently‑released CD‑ROM which accompanies my book Sound Synthesis & Sampling published by Focal Press and available from SOS mail order. The CD‑ROM contains all the audio examples, animated diagrams, searchable databases and other bits of multimedia that don't work so well in a book! Produced entirely on Apple Macintoshes (though it also runs on IBM PC‑compatibles), using a mixture of shareware and commercial software, it uses a database run‑time engine as the main playback software application. QuickTime is used extensively for the animations and audio examples, and I even produced an advert movie by making individual frames and then assembling them into a movie with an excellent shareware utility called Moover. For some examples, try visiting www.betsubetsu.com.

How It Works: Streaming

Streaming is one of those words that has been adopted by the computer business, and given a new and very specific meaning. To stream a file, in computer‑speak, means starting to play it before all of the file has been received — rather like a serial on the television where later episodes are still being produced whilst the first ones are being shown.

Whereas in the early days of computer multimedia, you got used to waiting for things to download, the trend has been to reduce waiting time wherever possible. This has resulted in multiple‑speed CD‑ROM players (I have a double‑speed one from the days when 24‑speed was a future dream), caching and streamed media. The larger and longer the file, the more important it is to have a way of starting playback without a long wait — especially on web pages, where every second waiting for graphics, animation or sound is another second when the user can hit the 'Back' button and surf off somewhere else!

The two key elements that make streaming possible are the data rate and the data format. If the rate at which the data is arriving from the network, a hard disk, or a CD‑ROM is slower than the rate required for playback, then streaming is going to stop sooner or later whilst things catch up. This is why there was so much demand for multiple speed CD‑ROM drives when CD‑ROMs started exploiting video playback with QuickTime — a single‑speed CD drive gives a mere 150 kilobits per second, which produces very jerky and blocky video by today's standards. The data format (the way that information is stored within the file itself) can also be critical to the success of streaming. If the required information arrives from the source in the same order that it is played then all is well, but sometimes it is easier to store the information out of time‑sequence, often because it is easier to load and save files in that form.

Apple's QuickTime has, up until now, allowed either real‑time playback, or what was called Fast Start, where it would play back video and audio as it arrived, provided the data rate was okay. QuickTime 4 adds extra 'hint' information to a QuickTime video or audio 'movie' which is then used to control the actual transmission so that the data rate should always be sufficient. It's rather like the difference between sending an important parcel by road, hoping that there won't be any traffic jams, as opposed to sending it by rail, where you don't expect traffic jams! The hints help the network 'signalmen' to keep the tracks clear for the trains to move efficiently.

QuickTime 4 isn't the first media player to support streaming, but its adoption of the RTSP (Real‑Time Streaming Protocol: look for RTSP instead of HTTP in the URL!) should give it a strong advantage and make it even more widespread. From a musician's viewpoint, QuickTime is now an even more worthwhile delivery mechanism for your music and related media! The QuickTime Streaming Server source code is available from www.apple.com/publicsource/