As the PC world embraces Thunderbolt technology on new devices and peripherals, AMD weigh in with budget-priced competition...

While most eyes at the January 2012 Consumer Electronics Show in Las Vegas were on large, ultra-thin televisions, I'm pleased to report that several manufacturers used the opportunity to announce new Thunderbolt devices, some of which are finally appearing for the PC platform. The first PC to be announced incorporating this previously Apple-only technology is from Acer: their Aspire S5 is "the world's slimmest Ultrabook” at just 15mm thick, featuring a 13.3-inch LCD screen and a motorised panel that opens to reveal HDMI, USB 3 and Thunderbolt ports. 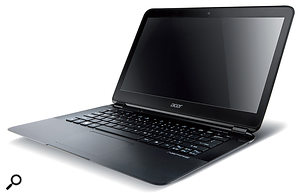 Lenovo also announced Thunderbolt connectivity on their forthcoming ThinkPad Edge S340 notebook model, while peripheral makers Elgato displayed the first ever bus-powered Thunderbolt external drive, incorporating a 128 or 256 GB SSD. By the time you read this, the Winter NAMM show will have happened, but as I write this a week before the event, rumours are already rife that both MOTU and M-Audio will also be releasing Thunderbolt-connected audio interfaces.

Meanwhile, AMD have put together a concept named 'Lightning Bolt' to provide some budget competition. This is a new technology that can send USB 3, DisplayPort and power over a single cable with mini-DisplayPort connectors. It's designed to be very simple and affordable and is for adding docking stations to their forthcoming Trinity notebook PCs. The extra cost on the notebook and cabling side will be minimal compared to Thunderbolt (a USB 3 controller chip costs 10 times more than a USB 2 chip, but a Thunderbolt controller costs a hundred times more), although performance won't be as good, with data transfer speeds 'faster than USB 2, but not full USB 3 speed'. AMD hope to have Lightning Bolt products on the market by the end of 2012.

Most of us tend to amass huge numbers of audio, graphics, video and preset files over the years. It can sometimes be a nightmare trying to track down a particular file when there are hundreds, or even thousands, scattered across various folders, especially if you've not come up with a consistent way to name them that still makes sense to you several months later. With hindsight, it can be easy to think up more sensible file-naming regimes, but the sheer drudgery of renaming them all by hand later on doesn't bear thinking about.

If you have thousands of audio files, the freeware Rename Master utility could save you many hours of renaming tedium!

Enter Rename Master, a freeware utility from software engineer JoeJoe (www.joejoesoft.com), which should run on most versions of Windows and doesn't even need installing, so you can copy it onto a USB stick and cart it around with you to use whenever the need arises.

By Any Other Name

Designed to rename multiple files with just a few mouse clicks, Rename Master is amazingly comprehensive, yet the Preview function lets you see exactly which names are going to get changed and in what way before you actually click on the Rename button. You can even save scripts with commonly used renaming options that you're likely to use again, to save even more time.

I normally start by navigating to the drive/folder in question in the left-hand Browser pane, using the File filter at the top right to isolate all the files whose names I wish to modify (for example *.wav, or *.aiff), and then selecting the recursive Subfolder Scan option to display every relevant file from that point downwards.

Using the various tabbed options in the bottom pane, you can now Add To, Replace or Remove any number of characters from your file names and/or extensions, from the start, end or any other position. It's also possible to find specific characters or words anywhere in the names and change those in similar ways, and sort your displayed files by name, date of creation or modification, and then auto-number them. You can also add dates to your filenames, and even force MP3 files to add such things as bit-rate and number of channels to their names. Many thanks to JoeJoe for this most excellent utility!

Microsoft will no longer offer mainstream support such as enhancements, bug fixes and security updates for their Vista operating system from April 2012, in line with their usual timescale of five years from the official release date. With Windows 7 becoming so popular, this may encourage yet more PC owners to move on, although with Windows 8 still hinted for an October 2012 release date, I suspect more will hang on until then, to benefit from all its radically new features. Let's hope audio software and hardware developers are ahead of the game this time, with Windows 8 drivers and updates in place before the hordes upgrade!