The new Intel-powered Mac Mini now includes an Apple Remote for the included Front Row software, which makes it easier to access your media content.

The Mac Mini joins the iMac and the new Mac Book Pro as the latest Apple computer to make the move to Intel processors. We also have the latest news on Universal Binaries, including a look at whether the developer tools used to create these new applications will have a negative effect on performance for Power PC users.

Apple used the 'f' word this month to introduce, first, a new line of Mac Mini computers featuring Intel processors and, second, iPod Hifi, the company's own version of the iPod speaker products made popular by companies such as Bose. The word was, of course, 'fun', and the occasion was another one of the company's increasingly regular special events, held this time on the 28th of February.

The iPod Hifi is a speaker system built into one unit that incorporates a Universal Dock into which you can slot your iPod. I had a brief listen to it in an Apple Store shortly after the announcement (which admittedly wasn't the best listening environment) and I have to confess that I wasn't bowled over. To be fair, though, as a consumer product, iPod Hifi isn't really aimed at the Sound On Sound readership, whereas the new Mac Mini is...

How Much Fits In A Mini?

A bit like a TARDIS, the Mini offers much, much more on the inside, but with the same elegant and compact appearance as before on the outside. For starters, as anticipated, it comes with an Apple Remote and the Front Row media-access software. But the real action is in the newly improved hardware.

Replacing the previous Power PC generation of Mac Mini are two new models, featuring either a 1.5GHz Core Solo processor or a 1.66GHz Core Duo (dual-core) processor. Both processors offer a 2MB Level-2 cache and a 667MHz system buss. With 512MB of memory (also running at 667MHz) now supplied as standard, with the possibility to upgrade to 2GB, these improvements alone give a clue to the performance increase the new Mini will offer.

For graphics, there's an Intel GMA950 chip with 64MB DDR2 SDRAM, which is shared with the main memory. It's quite common in the non-Apple world for low-end systems to share graphics and system memory, but usually causes a slight performance hit, compared with dedicated video memory. The Core Solo model includes a combo drive and a 60GB SATA 5400RPM drive, while the Core Duo model offers a Super Drive and an 80GB internal drive. Both models offer one Firewire 400 port, four USB 2.0 ports, a DVI output supporting up to 1920x1200 resolution (which can also provide VGA output, via a supplied adaptor, and S-Video and composite output, with optional adaptors), plus audio in and out stereo mini-jacks that both double as optical S/PDIF ports. For networking, both models include Airport Extreme and Bluetooth 2.0 as standard, and (my favourite enhancement) Gigabit Ethernet.

The new Mac Mini's improved feature-set does come at a price, though: the entry-level Core Solo model is now £449, while the Core Duo model costs £599. However, when you consider what the same specification would have cost in build-to-order options for the previous Power PC generation of Mac Minis, the new Intel-based models are actually slightly cheaper — it's just the cost of entry that's increased.

When we reviewed the original Mac Mini back in SOS May 2005, the conclusion was that even though it wasn't the most powerful Mac available, it wasn't so under-powered that it wouldn't be useful for learning Logic Express or Pro Tools LE. I'm sure this statement will still hold true, and with added performance the new Mac Mini will probably find more professional uses as well. For example, another possibility, which we looked at in April 2005's Apple Notes, was the use of a Mac Mini as a Powercore-like alternative for running more of Logic Pro 's plug-ins via Logic Node. Now that the Mac Mini is even more powerful in terms of processing and features Gigabit Ethernet, this looks like an even stronger idea.

Literally days after I completed last month's overview of the state of Universal Binaries, Digidesign (www.digidesign.com) announced versions of Pro Tools LE and Pro Tools M-Powered that will be compatible with Mac-Intel systems to be available in May. Digidesign will also simultaneously release Intel-compatible versions of all the company's own RTAS and Audiosuite plug-ins and those it distributes for other manufacturers, along with compatible versions of the DV and Music Product Toolkits and Digitranslator 2.

One or two manufacturers of host software applications seem to be following suit, and on the hardware front Metric Halo (www.mhlabs.com) have released Universal Binary drivers for the company's Mobile I/O interface. The MIO Console application is still Power PC-native, but is compatible with Intel Macs, thanks to the Rosetta translation technology.

Ableton released a public beta version of Live 5.2 this month (www.ableton.com/beta), now a Universal Binary and one of the applications I recently used to test an Intel iMac, which I'll be reporting on next issue. Ableton mentioned that Live 5.2 has full support for Steinberg's recently announced VST 2.4 specification for plug-ins, which also introduces support for Intel-compatible VST plug-ins on the Mac — so Live 5.2 supports Intel-compatible VST plug-ins on Intel Macs.

I wanted to test this, but didn't have any Intel-compatible VST plug-ins to test with (which isn't so surprising, since Live is possibly the first VST host to work on Intel Macs). Instead, I compiled the example plug-ins Steinberg include in the Software Development Kit for plug-in developers, using an Intel Mac with Xcode (Apple's development environment), to see if these would run with Live. As you can see from the screenshot overleaf, this worked, so hopefully it won't be too long before VST developers begin compiling Intel-compatible versions of their plug-ins. 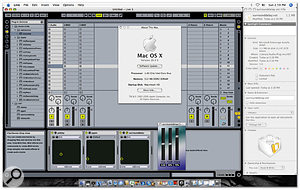 Here you can see Live 5.2 running natively on an Intel iMac and hosting some example VST plug-ins that I compiled for Intel systems, using the Xcode development environment.

On the subject of Universal Binaries, Propellerheads announced this month that an Intel-only 3.0.5 version of Reason (functionally identical to the current 3.0.4 Power PC release) would be available as a beta during the week beginning March 20th. At the time of writing, Propellerheads were looking for registered and non-registered Reason users to be beta testers. Once testing is complete, Reason 3.0.5 will be released as a free download for registered users.

Reason will not initially be available as a Universal Binary: there'll be separate versions for Power PC and Intel systems. On their web site (which is www.propellerheads.se), Propellerheads explain that when they tested a Universal Binary build, they noticed that it didn't perform as well on Power PC systems as the currently Power PC-only version 3.0.4. The reason for this is that the Mac version of Reason was developed using Metroworks' Codewarrior development system (now owned by Motorola). Codewarrior includes a different compiler (the tool that turns code written in a high-level language like C++ into low-level, machine-specific instructions) to the one supplied with Xcode. To create a Universal Binary, developers have to use Xcode, meaning that the Power PC version has to be compiled with Xcode's compiler, which Propellerhead say "creates a significantly slower program." So for now the Power PC version of Reason will be the Codewarrior-compiled version and the Intel version will be compiled in Xcode.

Compiler performance is something that hasn't received much attention in considering the transition to Intel-based Macs, but it's an issue of some significance because many major Mac applications (especially those that have been around over the last 10 years) will be using Xcode in order to make the transition to Intel processors. Apple have been consistently improving their own developer tools since the introduction of OS X, and with the release of Xcode with Panther the tools have become much stronger. It's likely that the forthcoming announcement of Mac OS 10.5 (Leopard) will include even more improvements to Xcode. Indeed, Propellerhead say that they're currently working with Apple to increase the performance of the Power PC version of Reason compiled with Xcode. This should benefit all developers compiling performance-intensive Power PC code with Xcode.

There's no obvious way to know which compiler has been used to create a Power PC application (before entering the land of Universal Binaries), but Propellerhead's statement doesn't necessarily mean that all Universal Binary versions of music and audio applications will be affected, since many factors contribute to how these applications are built. Apple's own Logic Pro seemed to perform a little less well in the 7.2 Universal Binary version on my dual-2.7GHz Power Mac G5 than the Power PC-only 7.1 build, but the difference wasn't very significant and I can't conclude that the Universal Binary Logic may run slower due to a compiler difference — only the developers could answer this question.