With OS 10.8 Mountain Lion nearly upon us, just when is the right time to upgrade your Mac OS — and to what version? 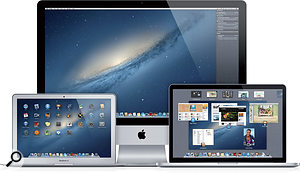 With us by the time you read this is Mountain Lion, Apple's latest OS.Photo: Apple

At June's Worldwide Developer Conference, Apple spilled a few more beans about the next big version of OS X — 10.8, or Mountain Lion — which is coming out this July.

It has to be said that 10.8 doesn't offer anything aimed directly at those of us who record and make music on the Mac. A few features are probably going to turn out to be very useful, mind you, such as the Growl-like Notification Centre, which flashes up little banners in the corner of your monitor to keep you updated on background tasks, not to mention full-screen application support on multiple monitors. But on the whole, 10.8 seems to be focused more on polishing the overall Mac OS experience, and adding or enhancing what might be called 'lifestyle' features. See www.apple.com/osx for the full rundown.

Buy a new Mac, of course, and it's going to have 10.8 from the start; you're on the 'bleeding edge' from the get-go. But for the rest of us, as owners of older machines we have a choice as to when we upgrade our operating systems (if at all), and to what version. On that score, I thought something I read on www.presonus.com recently was pretty wise:

"The Bottom Line: If you are serious about using your computer with any manufacturers' products, you want to wait a minimum of six months to update your OS, and only after you've researched every component that is being updated and know that it is going to work with your setup. If you make your living with your DAW… you should wait even longer!”

That's great advice, and worked for me when I recently took my 2011 MacBook Pro from Snow Leopard to the now year-old Lion. It proved to be the quickest and most trouble-free OS upgrade ever.

However, an unforeseen situation may have arisen now that Apple are distributing their operating systems primarily as downloads, via the App Store. It's this: no-one knows for sure yet if Lion will actually still be offered for purchase after Mountain Lion is released. I emailed Apple's CEO Tim Cook to ask (yes, really!) but he hasn't replied yet… If it does remain available, we can take Presonus's advice and still be moving to Lion at a time that suits us, while the masses get stuck into Mountain Lion. But if not, Snow Leopard users wishing to upgrade will face a 'double jump', or even further, right on to the bleeding edge. Ouch! We should know the answer next month — or when Tim gets back to me, of course.

When you do decide to upgrade your OS, don't make yourself a hostage to fortune. It's worth doing everything you can to make the procedure trouble-free and reversible. It's essential, I think, to make a final backup of your system disk, with the 'old' OS, on a separate, bootable hard drive. That gives you a fallback position, from which you could potentially keep on working, if the new OS installation goes wrong. Apple's Time Machine is a wonderful thing, but it does not produce a backup you can boot up from.

My own approach, going from OS 10.6 to 10.7, was to restart my Mac, run standard system maintenance procedures in the OS X housekeeping application Cocktail (www.maintain.se/cocktail, $19), restart again, then clone my system disk to an external Firewire drive using SuperDuper (www.shirt-pocket.com/SuperDuper, $27.95). That does produce bootable backups. Only then did I run the Install OS X Lion application downloaded from the App Store. As it happened, there were no problems at all, but I sure as hell kept that external drive handy for the first 24 hours or so. 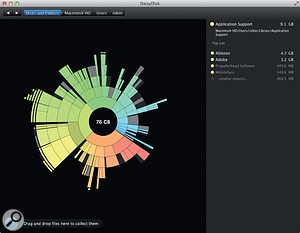 DaisyDisk is a superb tool for quickly identifying just what's on your drives.

The two Mac apps I've mentioned above — Cocktail and SuperDuper — have proven themselves repeatedly over the years. Here are a couple more I like a lot:

iStat Menus, $16: This app puts all manner of system monitoring displays in your menu bar, making it easy to check memory, CPU and disk use, as well as network traffic and disk activity. It has alerted me to all sorts of unusual activity, like crashed apps, rampant background processes and memory leaks, that would otherwise have gone undetected. Go to www.bjango.com/mac/istatmenus for more information.

DaisyDisk, $9.95: With a kind of mesmeric beauty all of its own, this app reveals what's taking up your disk space. Brilliant for planning archives, backups, and generally managing busy drives. Go to www.daisydiskapp.com for more information.