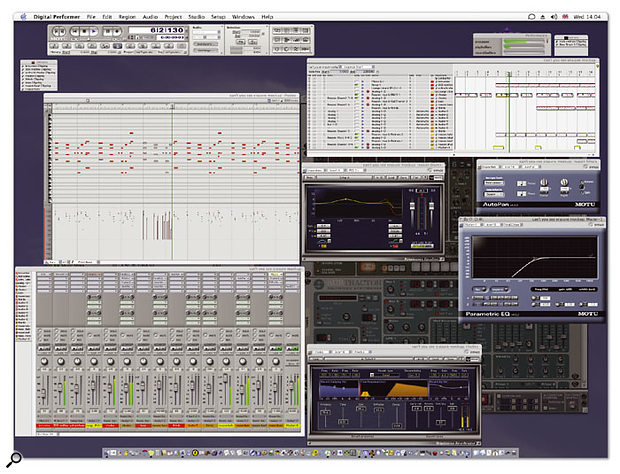 Panther's Exposé feature instantly tiles the windows of your open applications, or the open windows of one app, automatically shrinking them to fit the screen — ideal for laptop users, especially.

As Mac OS X's Panther incarnation brings some slinky new working methods to Digital Performer, we pass on some advanced ways of pasting data, as well as rounding up the usual tips and news for DP users.

If you're one of the growing number of DP users who've made the switch full-time to life in OS X, you're probably already running version 10.3, otherwise known as Panther. This latest and much-trailed incarnation of the Mac OS seems to be working well with DP 4, as it improves the apparent speed and smoothness of the user interface still further, and seems to increase stability just a tad, too. But there are other benefits, which enhance the DP experience quite considerably. More about these in a moment.

If you've yet to do the 10.3 update, make sure you visit www.motu.com and download the latest version of DP (which is 4.11 at the time of writing), along with the new Panther-compatible audio and MIDI interface drivers if you're using MOTU hardware. By the way, these updates are well worth having even if you're sticking with Jaguar for a while longer. In particular, users of MOTU audio interfaces that make use of the Cuemix software get an extra bonus, in the form of an updated and much-enhanced version of this utility. Specific enhancements include the ability to rename hardware inputs and outputs (so 'Analog Out 8' could become 'Send to PCM90', for example), making the mixerless studio concept that much more straightforward.

For me, though, the crowning glory of Panther is Exposé, the OS-level window management system that not only looks fabulous but is one of those 'how did I ever do without it?' features. And if ever an application needed some cutting-edge window management, DP is that application...

In short, Exposé is a window tiling system that operates on an OS or individual application level. Running loads of applications with open windows here, there and everywhere? Hit F9 and all windows, in all non-hidden applications, tile themselves neatly across your screen, shrinking as much as necessary to fit. Click on one and it jumps to the front, ready to work with, while all the others drop back to their original positions. If you're regularly working with DP 4 alongside Reason, other software synths, two track editors and perhaps even Safari and Mail, F9 is like a dream come true.

But then there's F10, which tiles windows for just the current application. This comes into its own with editing in DP, when you might have the Tracks window, Graphic Editor, Sequence Editor, Soundbite and Mixer windows all open and quickly need access to one buried deep. Hit F10, choose the window, carry on working. It's a revelation! And, finally, F11 shunts all open windows to the sides of the screen and gives unhindered access to your desktop.

So, a superb new feature. But there's more to it than meets the eye. A small but crucial aspect of Exposé is that you don't have to just hit F9, F10 or F11 momentarily — they can also be held down, in which case the Exposé 'effect' lasts until they're released. Big deal? Certainly. First, because all Exposé'd windows remain fully active, holding down F10 (for example) gives you the ultimate overview of the DP4 environment, for as long as you need — so you can check to see fader automation is happening in the Mixing Board, or briefly orient yourself with reference to the Tracks or Markers window. It's almost like having a super-high-resolution multiple monitor setup when you don't. Second, holding down Exposé keys is the quickest way to switch to a hidden window — hold down F10, for example, click on the window you need, and release.

Exposé also makes it easier to copy and drag items from window to window in DP. Say you need to drag a Soundbite from the Soundbites window to the sequence editor, but both windows are obscured by others. Hit (or hold down) F10 and click on the Soundbites window, then click and begin to drag your chosen Soundbite. Now, mid-drag, hold down F10 again and drag the Soundbite over to the Sequence Editor. Hold it there for a moment and the Sequence Editor springs to the front, at which point you can place the Soundbite in an audio track. The same works for Clippings, Chunks and all other types of draggable items. (Strangely, though, dragging Soundbites or MIDI data from one editing window to another always results in a 'copy' operation.) Dragging files to and from an open finder window can be done in a very similar way, but using F9 instead, and F11 does the same for transferring files to and from the desktop.

In DP, there are two main approaches to duplicating data: using the standard cut, copy and paste commands, or option-dragging existing data to make a copy. What DP doesn't have is the equivalent of the paste functionality in Reason and some other apps, where every paste command causes the playback wiper (and hence the new data-insertion point) to move forward by the length of the inserted data, so you can quickly build up repeated structures with just a few strokes of Apple-V. But there is another way to achieve the same thing: Paste Repeat — which can either be accessed directly via the Edit menu, or with the Control-Apple-V keystroke.

What Paste Repeat does is fill up a time-range selection with the contents of DP's clipboard. So let's say you've programmed a two-bar drum pattern and you want to expand that into a 32-bar section:

The exact way in which a Paste Repeat is handled is in fact quite subtle, and pretty intelligent. Very often in dance music, for example, you'll want the first beat of each measure you're pasting to be aligned with the first beats of measures throughout the time-range selection they're expanding into — otherwise that's going to be some fairly unconventional dance track! As long as you originally selected the pattern by dragging over the individual data events (a 'data selection'), DP handles the subsequent paste intelligently, just as you'd want it to, by maintaining the position of each pasted event relative to the original measure (or measures).

But for more Eno-esque meanderings (and downright Fripp-ery) you may sometimes want a selection that isn't exactly a whole number of measures in length to be pasted in a less 'correct' way, creating cross-rhythms that lie 'across' measures. The way to do this is to make the original selection, before copying, by dragging in the time ruler or using the I-Beam tool, using an Edit Grid set to a quaver (eighth note), a semiquaver (sixteenth note) or some other suitably accurate division. A subsequent Paste Repeat operation then reproduces your selection as many times as possible without respect to its original position in the measure.