Q. Do I need to address the gain structure differently in digital and analogue consoles?

I was told by a sound engineer that, when mixing, it is not a good practice to have all the channel volume faders way up and to have the master fader down, and that this applies both to analogue and digital consoles. Is this true? I thought that if none of the channels is clipping, then there should be no problem with putting them up and keeping the master fader at a lower level.

Technical Editor Hugh Robjohns replies: This is all a question of optimising the gain structure — or, in other words, setting the correct level at each stage of the signal path from start to finish in order to avoid overloads or deterioration in sound quality — something which is rather more critical when using an analogue console than when using a digital one.

In an analogue desk, the most likely point of overload when mixing is at the mix buss amps, so you have to set the gain structure of the front-end (voice channels, mic preamps and so on) and mixer channels correctly to optimise headroom and noise floor when these signals meet at the mix buss. Lowering the master output fader won't affect the mix buss in any way, since the master fader comes after this part of the circuitry. 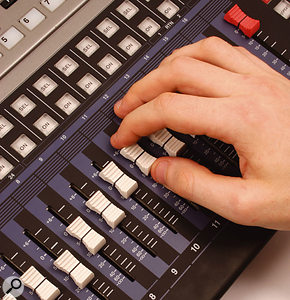 So, optimise the channel input gains with the channel faders at their unity positions, and pull down the channel faders (or reduce the input gains) if the mix buss gets too hot. In a recording/mix environment the master fader should ideally be on its unity gain position at all times unless you are fading out. In live sound situations you may want to have the master fader rather lower than unity to enable better level control of the PA system, leaving room to gradually crank the level up through the set, for example, or after the support act!

In the case of digital consoles, the situation is rather different, because the signal processing is done in a different way. In systems which employ floating-point maths, you cannot overload the notional mix busses however hard you try. With fixed-point systems the headroom is considerably less and it is potentially possible to overload mix busses, which is one reason why fixed-point digital console makers like Yamaha provide a digital attenuator before the EQ section of each channel.

Reviews Editor Mike Senior adds: I'd definitely agree with all that Hugh has said, although there's another thing which needs to be taken into consideration too: fader resolution. Most faders — analogue and digital — have their maximum resolution around the unity gain mark. This means that, around unity gain, moving the fader by a small amount effects a small change in level, while moving the fader by the same distance at the very bottom of its travel, where resolution is much lower, equates to a much larger change in level. When you're mixing (particularly with automation) very small changes in level can become very important, so it's useful to have the channel faders near the unity gain position for that reason.

The only way to do this and also keep the master fader near unity, however, is by using the channel input gains (or the digital channel attenuators on a fixed-point digital console) to get your mix into the right ballpark initially, only tweaking the faders once a rough balance has been set. On some digital consoles you can assign the attenuator levels to the faders temporarily to make this initial process simpler. If no channel input trimmer is available, you can sometimes adjust the output levels of the individual tracks from the multitrack recorder (or whatever your source for the mix might be) instead.

Unfortunately, many manufacturers don't provide the pre-EQ digital attenuators that Hugh mentions in their fixed-point systems, especially at the lower end of the market — all-in-one multitrackers in particular often don't include them — in which case you have no choice but to keep the channel faders quite low if you're going to avoid overloads, at the expense of mixing resolution. In the case of Roland's VS880, for example, there's no more headroom on the mix buss than on the individual channels, so you can easily encounter clipping at the mix buss. Furthermore, as on an analogue console, turning the master fader down doesn't avoid the clipping, it just reduces the level of the clipped signal!