Q. How can I find out if my melody has been used before?

I have a melody which I am absolutely sure I made up when I was a kid and I want to use it in a composition I am working on. However, the things kids make up can be 'derivative' at the best of times, and I need to confirm that I hadn't heard it before. I am fairly sure that I did write it myself because I have never heard it since in the following 20-odd years, but it would be nice to be sure. 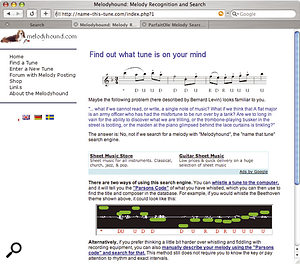 Do you know of any melody databases that could help me find out if I have lifted the tune from somewhere? I found one on the web (www.melodyhound.com) where you enter the Parson's Code of your tune and it checks a database, but I have no way of knowing how exhaustive their database is. Can you offer any advice?

Reviews Editor Mike Senior replies: There are a number of melody databases accessible on-line, using a variety of different methods to catalogue and recognise melodies, though none of them is by any means exhaustive. You're probably no worse off humming your melody to friends and family of different ages to see if it rings any bells. However, if you are planning to release a track containing this melody, you may need to take the issue a bit more seriously.

Disregarding the significant moral issues here, the legal situation in the case of similar melodies, as I understand it, is very much a grey area, and far less straightforward than in cases of mechanical copyright infringement (using a sample without permission). If the context and lyrics have completely changed, then the prosecution would be obliged to show not only a serious similarity in both note pattern and rhythm, but would also probably have to show that you had sufficient access to the material from which it was taken. An interesting case study is the 1984 copyright infringement case against the Bee Gees, where unknown songwriter Ronald Selle accused the brothers Gibb of lifting the melody from his song 'Let It End' for their hit 'How Deep Is Your Love'. You can find information on the case by searching the web for 'Selle v. Gibb'. Alternatively, Columbia Law School's Music Plagiarism Project web site, which can be freely accessed at www.ccnmtl.columbia.edu/projects/law/library/entrance.html, features a wealth of information on music copyright infringement cases in the US over the last 150 years, in the form of documents, scores, audio and video files.

In the Bee Gees case, though the melodies in the two songs were agreed to be all but identical (even Maurice Gibb mistook part of Selle's song for the Bee Gees own while on the stand) and Selle had written and copyrighted 'Let It End' several years before the Bee Gees wrote 'How Deep Is Your Love', the claim of copyright infringement was rejected by the judge. Why? Because Selle couldn't prove that the Bee Gees could have heard his song before they wrote theirs, and couldn't rule out a common source which inspired both songs. 'Let It End' was rejected by a number of record companies and never released, and Selle was forced to admit that there were similarities between both songs and a number of others, including a previous Bee Gees hit. It would seem that in this kind of case, the onus is on the party making the accusation of plagiarism to show not only that the similarities in melody are such that they can only be explained by copying, but also that the alleged copyists could definitely have had access to the original melody and that they couldn't have both copied it from somewhere else.

Although I'm no legal professional, I have been told that this last point can give rise to a defence against accusations of copyright infringement, namely to cite a piece of music that's in the public domain, such as an old classical work or a piece of folk music, as the source of your contested melody. Quite a few composers of high-profile music have sought out this kind of copyright-free music in the past, as an insurance policy in case anyone should have a pop at them. Accusations of plagiarism are more often than not groundless (at least, I'd like to think so), and the more successful a composition is, the more likely it is that someone will believe that the money and fame should belong to them. Having a piece of copyright-free music to claim as a source could squash any suit before it gets off the ground. Again, there are databases which can be used to look for suitable material, but they're rare, notation-heavy, and all of them index the melodies differently. Finding instances of a given melody is a long-winded and painstaking job (I speak from first-hand experience on this one!), even if you have access to the books and you have a musicology degree.

If you're worried that your melody is a knock-off, go ahead and record it anyway. When you listen to the finished article, with your lyrics, your arrangement and your performance, you may well find that it is your song after all.