Q. How do I set up a laptop for live use?

I have just bought Emagic's EVB3, EVD6, and EVP88 software instruments. I also have the EXS24 MkII software sampler. I've fallen absolutely in love with all of these items and the opportunities they afford me in my studio. However, I want to use them with my band in a live setting, in both rehearsals and also on stage live. My guitar player's girlfriend has a four-year-old Gateway Pentium III laptop with 64MB RAM and Windows 98SE installed, and she has agreed to let me do whatever I need to so that we can use it for music. She doesn't have anything on there that needs saving, and we just want to wipe the thing clean and end up with Windows XP for an OS, 320MB of RAM and Emagic Logic Audio Platinum with the software I have mentioned.

However, she knows nothing about computers and neither do I. I have never deleted an OS before, I have never wiped a hard disk, and I have certainly never installed RAM on a laptop. I have the Windows XP disc that came with another PC, but I have no idea if this OS can be installed on another machine. What should I do? 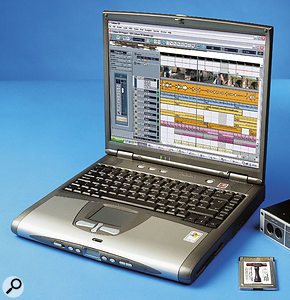 Even with a brand-new laptop, taking your PC on stage to play plug-ins live is still a gamble. PC specialist Martin Walker replies: You can certainly start again from scratch with a PC laptop, but this isn't an easy task if you haven't done anything like it before. If you want to install more RAM, then you'll first need to check that a spare slot exists for further expansion — many laptops are shipped with all their memory slots already filled, so you might have to discard at least some of the existing RAM to install larger-capacity chips.

If possible, installing the extra RAM is best done before anything else, so you know it's been recognised correctly, and can rule it out as a possible cause if you get problems later on. You'll need to get RAM that's compatible with what's already in the laptop, and once again the Gateway web site is the best place to look first, although the chances are that generic RAM from other suppliers may also be available at lower prices to suit your model.

If you chose to install Windows XP, you would need to buy another license for it, since it needs to be activated remotely by Microsoft for each individual machine if you want to use it for more than the 30-day grace period. In your situation, sticking with Windows 98SE would be a better bet, since on a laptop that's at least four years old, XP drivers may not exist for its various motherboard devices, and you already have a perfect right to re-install the existing operating system. Wiping the current contents would certainly be a good idea after all this time — you can do this as part of the Windows install procedure by using the Delete Partition option, but make absolutely sure you've first backed up any data belonging to your guitar player's girlfriend, or be absolutely sure that there's nothing she needs to keep, or you won't be very popular!

All PCs should have the latest motherboard drivers installed straight after Windows as a matter of course, since this will ensure that you don't have any 'exclamation marks' in Device Manager that indicate unknown motherboard hardware devices. If your guitar player's girlfriend still has the original driver CD-ROM that came with her laptop then this should include suitable drivers for Windows 98SE, but you should still try to track down the most recent versions from the Gateway web site if possible. Personally, I don't like having Microsoft Word installed on any music PC, since it has a habit of running background tasks behind your back that can interfere with the smooth running of music applications, but I described how to track these down and disable them in PC Musician SOS December 2001.

However, even once you've re-installed Windows 98SE on a freshly formatted partition, installed the various chipset drivers, and added more RAM (if available), you're still faced with the prospect of running Logic Audio Platinum plus a selection of software synths and samplers on a Pentium III laptop. Most people now consider a desktop Pentium II 233MHz the absolute entry-level machine for running music applications, making your Pentium III laptop a good contender to run a selection of audio tracks, some plug-ins, and perhaps a synth or two, but you'll be really struggling to use all the software you mention simultaneously. You'll also need some sort of external sound device, since relying on the motherboard sound chip with its high latency and low audio quality is a bit risky, and some laptops have a habit of occasionally interrupting sound chip playback to do other things that you may not be able to trun off. You'll also need to disable any power-saving technologies to get maximum CPU performance.

Overall, even after all this work, while you might find the updated laptop useful for rehearsals, I think you might regret trying to use it live. As many musicians will tell you, PCs and live venues can be an unhappy mix, and you really need to know your way around any computer in this scenario if the worst happens and you need to give it emergency first aid. While I don't want to sound too pessimistic, from a standing start with no previous experience I personally think you've chosen a tricky task, but if you're determined to give it a try it may be worth trying to find a local 'PC guru' to give you a hand. Good luck, whatever you decide!