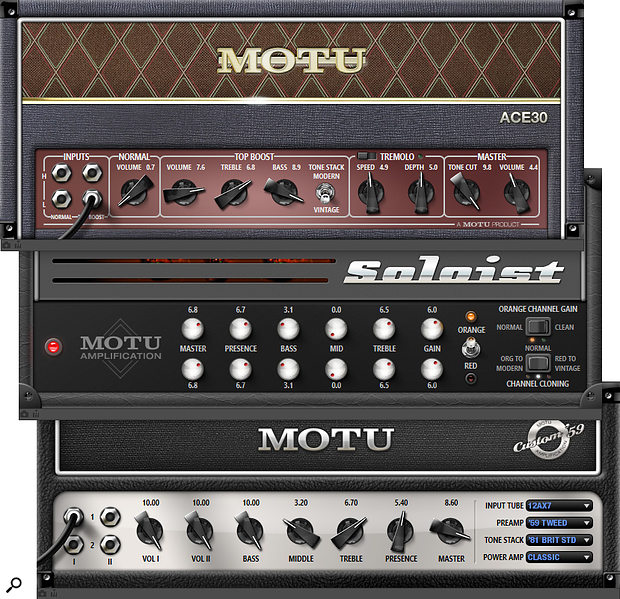 From shred to salsa, Digital Performer's amp modelling tools can cater for any guitar style.

One of the biggest developments in Digital Performer 8 was the addition of a new suite of plug-ins targeting guitar and bass players. DP9 took this even further, adding synth guitar-type capabilities and multiband distortion.

In this workshop, we'll look at how to get the best from the three amp simulators introduced in DP8. Note that the amp plug-ins themselves don't include cabinets — you'll need to use one of the rooms described later, and choose the desired cabinet and miking, to assemble a final guitar sound.

Both individually and together, the three amps cover the main guitar amp domains of clean, crunch and distorted. As the name suggests, ACE30 emulates the Vox AC30 family, offering Normal and Top Boost channels each with high- and low-level inputs. You can also choose from 'vintage' or 'modern' Tone Stack circuits. Vintage gives the Gibson tone stack sound, which Vox copied from the Gibson GA‑70/GA‑77 schematics for their mid-'60s amps, while the modern option is more like the Fender tone stack. ACE30 also boasts the famous 'tone cut' control that confused people because turning it clockwise made the sound duller.

ACE30 will change your mind if you think amp simulators can't do clean sounds. However, I also like what you can do with a bit of overdrive. The settings in the amps screenshot show one of my favorite ACE30 sounds; it's bright, but also big, with a bit of a snarl. You can obtain all the typical Vox sounds, and having Normal and Top Boost inputs adds flexibility. You don't even need to use a Live Room to follow up this particular amp, although that will deliver more options — for cabs I actually prefer the three Combo options, and the Citrus one, more than the dedicated ACE30 cab.

Next up is Soloist, which models the '90s two-channel Mesa Dual Rectifier Solo Heads, and includes Orange and Red channels. The 'clone' switch transfers some characteristics of one channel to the other, so you have four possible channels — or six if you consider that the Orange channel has normal and clean settings. Like ACE30, Soloist can generate clean or dirty sounds, and the Orange clean setting can do a pretty convincing Fender Twin-type sound if you pull back on the gain a bit, adjust the tone controls, and take advantage of Live Room G (there's a 2x12 cab in the room, although I also like the 2x10 Tilted and 4x10 Combo options).

Using Channel Cloning to impart some Red channel characteristics gives the Orange channel a bigger, beefier sound, but not as over-the-top distorted as the Red channel itself, which is your basic Mesa lead sound. Pushing Gain up to 10 really fattens the low end, whereas pulling back on Gain is like adjusting a guitar's treble bleed tone control, giving brighter solo timbres. Channel Cloning from the Orange channel isn't as dramatic as the other way around, but does give bright, jangly Red channel timbres with the Gain pulled back to around 2 or 3.

Finally, the Custom‑'59 plug-in models the Fender Bassman, Marshall JTM45 and Marshall JCM800. However, there's some do-it-yourself here, because the Input Tube and Power Amp each have four options, while the Preamp and Tone Stack have three options, allowing you to mix and match characteristics from the three amp models. The screenshot shows one of my favorite settings; to my ears, this amp gets along best with the Live Room's two 2x12 cabinets, and just about begs for an overdrive stompbox to feed it. 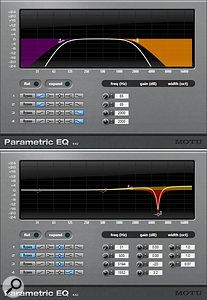 Equalisation can be useful both to control unruly high and low frequencies (top) and notch out unpleasant resonances (lower).Equalisation can be used both before and after an amp simulator to good effect. With heavy distortion and big, rhythm guitar-type power chords, inserting low-pass filtering before the amp to cut the very highest frequencies keeps them from distorting and creating a harsh high end. The screenshot shows how two low-pass filters can be stacked to create a steeper slope. Meanwhile, high-pass filters that trim out the lows give more of an open-back cabinet sound that stays out of the way of bass.

I've also found most amp simulators produce resonances you may or may not want; in extreme situations, this gives an almost 'whistling' character. Notching this out can give a sweeter, beefier sound. To find the frequency, boost a high-Q parametric and sweep slowly in the range above about 2kHz. If a particular frequency jumps out and sounds distorted or annoying, start cutting at that frequency to tame the resonance. If this makes the overall sound too dull, you can compensate by adding a moderate shelf starting around 1 or 2 kHz to increase the overall brightness. You can then follow this with Live Room G to wrap an ambience around the amp.

DP's amps can be 'mixed and matched' with various cabinet and mic modelling options courtesy of the three Live Room plug-ins: Live Room G for guitar, Live Room B for bass, and Live Stage. The Live Stage plug-in is CPU-optimised for live performance; it provides nine guitar and four bass cabs, and a virtual mic you can place with five options (on-axis, off-axis, near, far and far omni). However, Live Room G is far more sophisticated. It models room ambience — with decay and damping controls, as well as room miking — and provides a Drive control for the same selection of cabs as the Live Stage. 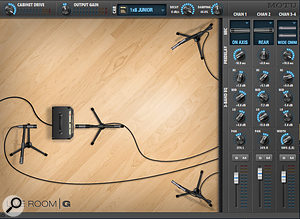 The Live Room G plug-in is a comprehensive cabinet simulator with numerous miking options.Of the four Live Room G mics, two have the same placement options as in Live Stage, but offer three-band EQ as well as a pan control for stereo placement and a pre-delay control that allows moving the mic forward or backward by up to 10ms. The mics also have solo and mute buttons, so you can isolate each mic to optimise its settings.

The other two mics provide various stereo configurations. Wide omni gives a wide, spacious stereo spread for a big room sound, while X/Y has the most focussed sound, Blumlein combines more ambience (and a wider image than than the X/Y option) with excellent mono compatibility, while ORTF also gives wider imaging than the X/Y position but picks up less ambience than the Blumlein configuration, and mono compatibility isn't quite as good.

One unexpected feature for all rooms is that the program treats the four mics like multiple outputs from a virtual instrument. Because the outputs are tapped before the EQ, pan, fader and so on, you can create entirely different ambiences using delays, reverb, or other processors. With mono tracks, each mic is a mono output. With stereo tracks, the two main mics are one stereo pair, while the room mics are another stereo pair. On the down side, you can't move the mics around with any of the amps, for instance by sliding a mic along the line from a speaker's cone to its edge.

Optimised for bass guitar, Live Room B features a choice of four bass cabs and a different selection of mics that are more commonly used with bass. These include emulations of the AKG D112, Sennheiser e602, Shure SM7 and M-Audio Sputnik, plus a subkick mic and a far omni mic.

As well as supplying the separate amp and cabinet plug-ins, DP comes with well over 100 complete guitar presets that combine amps, processors and Live Rooms. But as is always the case with amp simulators, I feel that if you call up a preset and it sounds right, you're just lucky. The odds of presets being designed around your guitar, playing style, musical preferences and so on are remote. However, these presets do create an excellent point of departure where all you may need to do is tweak one or two controls before everything falls into place. But also, there's more to the story than amps.

In the next workshop we'll delve into DP's guitar effects, and look at how some of its more general processors can be used with guitars.