We offer a clutch of hints and tips for DP users considering adding a Focusrite Liquid Mix DSP plug-in platform to their setup. 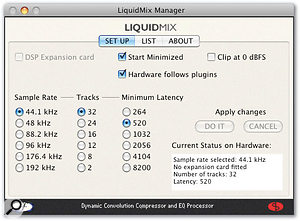 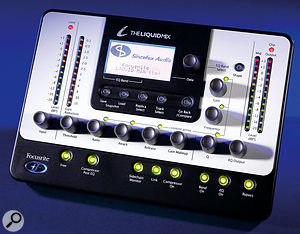 There's a tiny bit of effort involved in accommodating a Liquid Mix in your DP setup, but it's worth it for the quality. Here you can see that the Liquid Mix maintains its own minimum buffer size in the Liquid Mix Manager application, which can be confusing. The background plug-in rendering in DP5 and DP6 can make using dozens of plug-ins a viable proposition even on very modest Macs. But when the highest quality EQ and compression is called for, many users turn to 'powered' plug-in solutions such as Universal Audio's UAD1 or Focusrite's Liquid Mix, which offer well-regarded emulations of vintage analogue gear. I've been using the latter with DP5 for some time now, and its integration with DP has steadily improved over time, to the point where it's now extremely stable.

Getting up and running initially with the Liquid Mix is straightforward, but there are a number of things that DP users should be aware of. The first is the slightly unusual behind-the-scenes plug-in architecture. The Liquid Mix installer puts plug-ins in your Mac's VST and Audio Unit ('Components') folder at [your HD] / Library / Audio / Plug-Ins, just like many other plug-in installers. Just don't be tempted to trash those VSTs when doing a spring-clean of your Mac: they're essential! While DP only sees the Audio Unit versions, those are actually pre-built 'wrappers' for the VSTs. This has a knock-on effect, too, if you use Audioease's VST Wrapper or FXpansion's VST to Audio Unit Adapter, both of which could cause the Liquid Mix to show up in your plug-in pop-up menus twice. Bottom line: leave your Liquid Mix installation just as it is, and be careful to select the 'proper' Audio Unit version, normally near the top of the Audio Unit pop-up menu list, when calling up an instance.

The next potential head-scratcher is latency and buffer sizes. Confusingly, the Liquid Mix maintains its own minimum buffer size in the Liquid Mix Manager application, separately from DP. At first sight it looks as though you might need to match that to DP's own buffer size, but as of v2 of the Liquid Mix software it's all sorted out automatically for you. Low buffer sizes in both applications will result in lower overall latency, but can also lead to a few hiccups in the audio, so increasing the sizes can help with this. Since the Liquid Mix is best used when actually mixing, that usually isn't a problem. There's one extra thing to watch for: Focusrite recommended in 2006 that if you run DP at a buffer size of 1024 you should also use a Work Priority setting of Medium or Low in Setup / Configure Audio System / Configure Hardware Driver. It should also go without saying (but I'll say it anyway, just in case) that you really want DP's Automatic Plug-in Latency Compensation enabled. It is by default, but you can check it in Setup / Configure Audio System / Configure Studio Settings.

There are a few other little things to be aware of, all of which are really important. In each Liquid Mix plug-in window you open you must make sure that the 'Always Run in Real Time' option is selected. This is in the plug-in's title-bar mini-menu in DP5, but might well be elsewhere in DP6. If you don't select this, the Liquid Mix processing could become inactive when you close the plug-in window. (It would be nice if this could be configured automatically in a future version of the Liquid Mix or DP.) Next, if the version of the Liquid Mix you're using has the 'Fix Offline Bounce' option, make sure it's ticked, to ensure that you get good results when using Liquid Mix emulations during a faster-than-real-time Bounce To Disk in DP. The Liquid Mix can only bounce a little faster than real time, even when supporting just a few emulations, so it's worth bearing this in mind when it comes to planning workflow with complex projects. Finally, be very careful if you ever intend to sleep your Mac when using the Liquid Mix. My experience is that if you try this, the link between the Liquid Mix hardware and software is lost when the Mac wakes up, with a crash of DP an inevitable consequence. But you can sleep without having to quit DP. Before doing so, switch your project to a new, empty sequence that doesn't contain any Liquid Mix plug-ins. Then, after waking up, switch back to your main sequence and it should be business as usual.

iZotope's plug-ins, such as Ozone and Trash, are some of the best out there, and DP users love them because they're available in native MAS format as well as AU. Their newest product, RX, is an application (and probably by the time you read this a plug-in) that redefines the sophistication of noise reduction available at this price point. 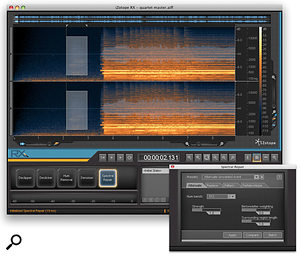 Well-established tools like Waves' Restoration Bundle, Z-noise and WaveArts' Master Restoration Suite can work wonders on all sorts of material, but they lack true spectral processing: the ability to remove things like the guitar-string squeak or passing police-car siren from a section of audio while leaving the rest of the signal untouched. Attempting to use conventional noise reduction, EQ or dynamics processing for this sort of thing is like trying to use a JCB to open a yoghurt pot, and until now the only options for most of us have been to put up with the unwanted noise or go somewhere that has a big-money system such as CEDAR Retouch.

Enter RX. As well as more familiar noise-reduction tools such as a declicker, declipper and general denoiser, RX also includes a true Spectral Repair mode: you select problem areas in your audio and RX offers you various choices, including attenuating or regenerating harmonic content in that area by examining what's happening around it, in both the frequency and time domains. The results can be nothing short of staggering, with damaged or noisy audio restored to pristine condition with a few clicks.

It remains to be seen how iZotope implement the plug-in version of RX, but in the meantime the RX application can be used to work on otherwise finished DP masters. RX can open WAV, Broadcast WAV, AIFF, MP3 and WMA files, so DP6 users using WAV or AIFF file as the native audio format should have no trouble. If you're on DP4 or 5 you'll need to Bounce To Disk or Export your audio first, to get it into a suitable format.

Check out www.izotope.com for video demos, tutorials and a downloadable demo version. The basic version of RX costs $349, while the Advanced is a more hefty $1199. The basic version still offers the same restoration modes and quality, but not the Advanced dither and sample-rate conversion options. Look out for an SOS review soon.

What Do Mastering Engineers Actually Do?
5 days 3 hours ago.