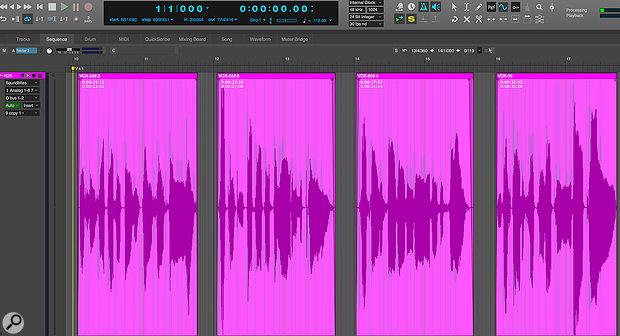 Prior to mixing, it's often worth cleaning up your vocal track to get rid of unwanted noises and breaths.

Digital Performer has all the tools you need to sculpt the perfect vocal sound.

Previously in Sound On Sound's Digital Performer workshops, we've covered techniques for comping and pitch-correcting vocal tracks. This time, we'll talk about processing and mixing them.

In addition to setting the levels of your vocal tracks so that they sit well in the mix, you'll probably want to do some tonal tweaks with EQ, and use compression to control dynamic range and/or add colour. You'll also want to dial in ambience with reverb and possibly delay. And, if it fits the song, you can even get creative with one or more of DP's many modulation effects.

Before getting too far along in your mix, it's helpful to solo the vocal track and find any glitches on the comped take, such as noises between phrases and overly loud breaths. First, make a duplicate of your comped take as a safety. Next, go through the track in the Sequence editor in Soundbites view, and cut out any problematic sections around the vocals using DP's editing tools. You could even cut all the space between vocal phrases, to get rid of any residual noise recorded from the mic during pauses. You might also want to reduce or cut out breaths, though in both cases you need to be careful not to overdo things to avoid making the results sound unnatural. When you create separate Soundbites from your edits, make sure to add fades to all the Soundbite boundaries to avoid creating clicks. 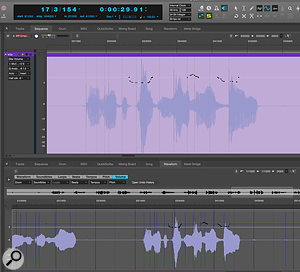 Adjustments made using Bite volume are independent of standard track volume and always stay with the Soundbite they were applied to. The Reshape tool from the Tool Palette is handy for editing Bite volume.Once you've set a basic level for your vocal track, take a listen and focus on whether some words or phrases are significantly louder or softer than the rest of the track. If so, DP offers a number of corrective options. You're probably familiar with DP's track-based automation; but you can also use an independent, Soundbite-specific type of automation called Bite volume (aka Soundbite volume). To edit Bite volume, go to the Edit Layer menu in the track settings panel for the vocal track in the Sequence Editor and select Bite volume. You'll see a thin, light-coloured line running horizontally across the top third of the track.

An easy way to edit this is to use the Reshape tool (in Set Mode) from the Tool Palette, with the Reshape Mode set to Free. Just use the tool to draw in the volume corrections you want. You can also edit Soundbite volume in the Waveform window, under the Volume tab. A useful strategy is to use Bite volume for corrective fixes that get the dynamic range broadly in the right area, and then apply track automation for setting the vocal's level relative to the rest of the mix.

Among DP's dynamics processing choices are two vintage compressor emulations: MasterWorks Leveler and MasterWorks FET-76. Both emulate iconic hardware compressors, and both are great for taming the dynamics of vocals and adding simulated analogue colour to your digitally recorded tracks. Which one you choose depends on the type of sound you're going for. You could even experiment with using both.

MasterWorks Leveler recreates the warm, smooth sound of the Teletronix LA-2A, which was an optical compressor with a tube amplifier stage. The Gain Reduction knob controls how hard the input signal hits the emulated optical circuitry, and thus how much compression you get. Use the Makeup Gain control to compensate for volume reduction brought about by the compression. The Response knob gives you subtle control over the attack time. The four buttons at the bottom let you select between the characteristics of four different incarnations of the LA-2A. The Slow options have a slower attack time and thus a more natural transient response than the Fast options, which are less transparent.

One important thing to note about DP's MasterWorks Leveler is that it emulates the real hardware so accurately that the plug-in needs to 'warm up', just like the real hardware, before it settles in to its nominal state. So run the vocal track through it once or twice before you begin tweaking, and do the same when you later use Bounce to Disk or other finishing processes. 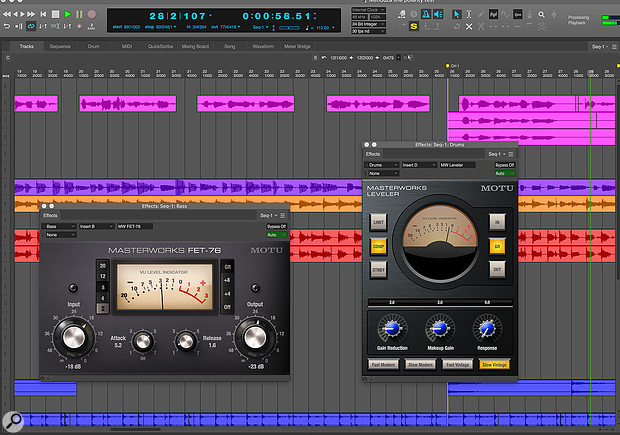 The FET-76 plug-in emulates the classic UREI 1176 compressor. Like FET compressors in general, it offers fast attack times, adds some pleasing harmonic distortion and is excellent for bringing a track to life. It's perfect for vocals on high-energy songs where you want a little bit of distortion. Like the hardware 1176, the MasterWorks FET-76 has a fixed threshold, and you use the Input knob to control the amount of compression. The higher the input setting, the more the signal gets compressed.

The Attack and Release knobs are similar to what you'd find on any compressor, except that like on the hardware 1176, they're oriented backward from most compressors. The fastest setting is the fully clockwise position (five o'clock), and the slowest is the fully counterclockwise (seven o'clock). Faster attack times clamp down more on transients, slower attack times let more transients through uncompressed. Quick releases create more pumping, while slow releases give you smoother response. Setting the Attack control all the way down to zero turns off the compression completely and lets you add the colour of the FET-76 without impacting dynamics.

Even if the tone you captured with the mic is fantastic, you'll probably want to tweak the frequency characteristics of your vocal, at least a little, to make it sound its best and fit in with the rest of the mix. DP's MasterWorks EQ plug-in is a powerful tool with some handy features built in.

For each of its five fully parametric bands, you can choose from four different filter types, which differ mainly in their Q (bandwidth) curves, letting you customise the behaviour of the EQ. You also get a real-time FFT display to give you a visual representation of the frequency content of the track and the impact of any changes you make.

Even if you don't need to apply much by way of tonal changes, you'll likely want to use MasterWorks EQ's high-pass filter to roll off unwanted frequencies below the vocal range and perhaps to reduce boominess brought about by proximity effect. Both the high- and low-pass filters offer six different slope settings, giving you a lot of control over how steeply they roll off. On a vocal, you also may want to use a high shelving filter on the upper band to add some 'air' on top, starting in the neighbourhood of 10kHz. 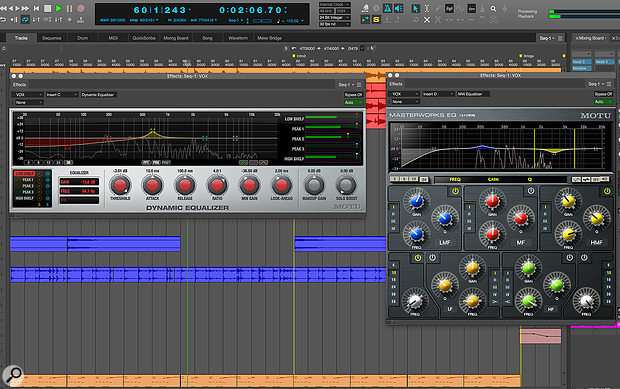 Another excellent plug-in for tweaking vocals is Dynamic Equalizer, a five-band EQ that also allows you to dial in compression at the frequency you set for each band. An example of how it could be useful for vocals is in a situation where the character of a singer's voice changes with volume and gets a little shrill in the loud sections. You might not want to use a standard EQ to cut at the offensive frequency, because it would attenuate that frequency throughout the whole song. With a dynamic EQ, you can set it to reduce that frequency only when her voice is loud.

DP also offers a fully featured De-Esser plug-in for reducing vocal sibilance. It's designed to let you quickly find sibilant frequencies and attenuate them, and even features a look‑ahead feature for catching fast sibilance.

Finally, DP also includes a selection of reverb and delay effects for adding ambience to your vocal track. ProVerb, a convolution processor, is DP's most powerful reverb plug-in. It uses impulse responses (IRs) to recreate the characteristics of real, reverberant spaces, and even lets you import your own or third-party IRs.

A great way to apply reverb to a vocal is to follow the reverb with a compressor, with the compressor side-chain fed from the dry vocal. This means that while the singer sings, the reverb is pushed back a little by the compressor, before swelling at the end of each phrase. Setting this up sympathetically can give the impression that there is a lot of vocal reverb without compromising intelligibility or sounding distant. 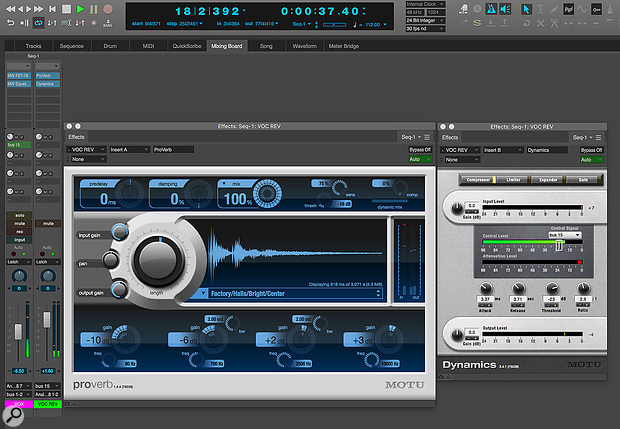 Here you see the vocal being sent through a bus to an aux track with ProVerb. Inserted on the same aux is Dynamics, with its side-chain input set to the same bus. This setup automatically 'ducks' the reverb when the singer is singing, but still leaves ambient reverb tails at the ends of the vocal lines.

To configure this in DP, create an aux track, insert a reverb (or delay) plug-in and assign a bus as its input. Configure a send on the vocal track to the same bus. Insert DP's Dynamics plug-in (set to Compressor) after the reverb, and switch its control signal to the bus feeding the reverb. Start with a relatively low ratio of about 2:1 or 3:1, hit Play, and adjust the threshold until you're getting some gain reduction. Set the Attack and Release controls to taste. The release is particularly important: long release times will give you a smoother response, and shorter ones will pump more.

DP's plug-in collection also offers a full suite of creative effects that you can use for non-standard vocal treatments. You'll find choruses, flangers, phasers, filters and even distortion plug-ins. Some of these effects are in guitar stompbox form, but their quality is high and they could undoubtedly be used on vocals if you wanted. If you're going for some really 'out there' vocal effects, you could even use Megasynth, which is a synth-like processing plug-in that can do a variety of effects at once including adding an octave below, modulating with an LFO or envelope, applying a pattern modulator and more.